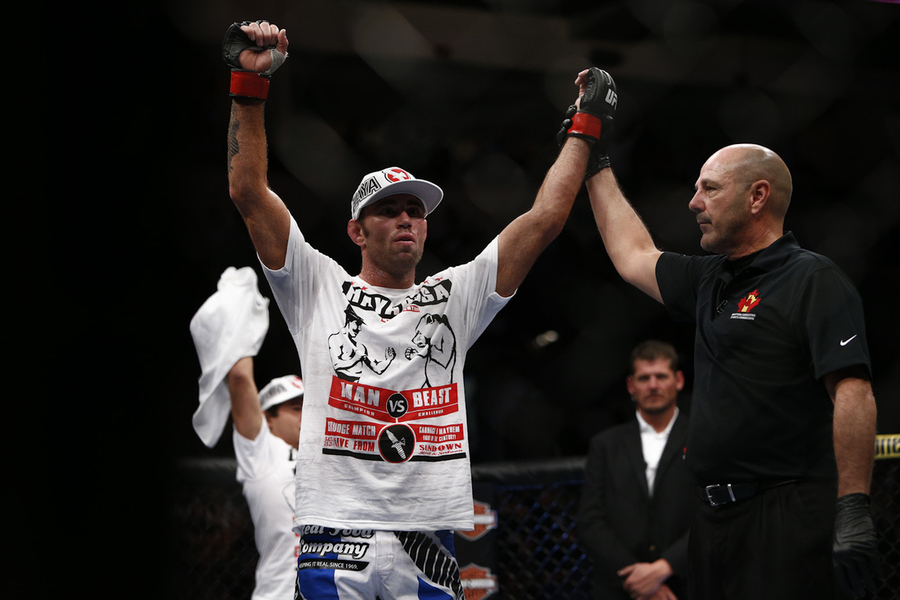 On Saturday, Oct. 11, World Series of Fighting will host its 14th event from the Edmonton EXPO Centre in Edmonton, Alberta, Canada.

Former UFC fighter and Strikeforce champion continued to prove that he’s a top welterweight with a first-round finish of WSOF Canada welterweight champion Ryan Ford. Ford caught Shields with a left hand early, rocking the Cesar Gracie product. Ford, wary of the ground game of Shields, held back and allowed Shields to recover. Shields responded by hunting for the takedown. Shields eventually capitalized by taking the fight to the mat and getting to Ford’s back. From there, he worked for the rear-naked choke. With approximately half a minute remaining in the round, Shields cinched up the choke and coaxed a tap from Ford to claim the victory. Shields will now likely await the winner of the championship bout between Rousimar Palhares and Jon Fitch.

Smealinho Rama wasted little time staking his claim to the WSOF heavyweight title. The Canadian heavyweight landed a series of strikes early in the opening stanza to leave opponent Derrick Mehmen scrambling to recover. The 22-year-old Canadian didn’t give Mehmen any breathing room, however, while pouring on the punishment. Rama’s strikes dropped Mehmen and forced the referee to step in, bringing an end to the fight. Rama captured the heavyweight crown with the TKO finish in just 51 seconds of the first round.

Chris Horodecki put together a dominant display of striking, wrestling and grappling i his featherweight clash with Luis Huete. Huete was no match for the kickboxer on the feet, but Horodecki’s best offense came in the form of takedowns and top control. The Canadian implemented his game plan throughout the three-round affair to walk away with all three rounds on the judges’ scorecards.

In the opening bout of the evening’s main card, Jared Hamman overwhelmed Luke Harris to claim a first-round TKO victory in the pair’s light heavyweight clash. The fighters traded on the feet for the first two minutes of the round with neither fighter gaining the upper hand. As the midway point of the round approached, Hamman caught Harris with a punch and followed up with a barrage that dropped the judoka and forced the referee to step in and call an end to the contest.