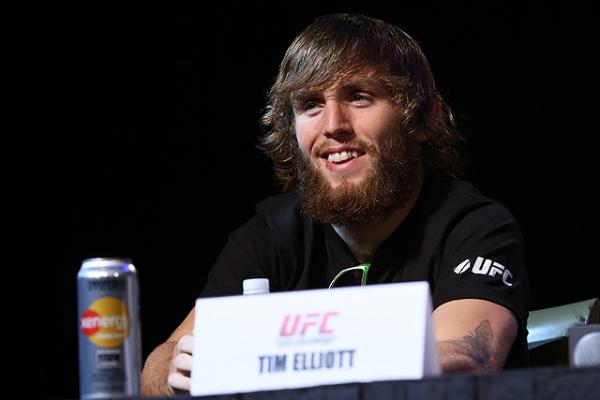 On Saturday night at Titan FC 34, flyweight title contender Tim Elliott is out to prove that he is a finisher. The former UFC flyweight feels that the lack of excitement in his fights in the UFC was not of his doing. As Elliott puts it, “It takes two to tango!”

“The flyweight division is suppose to be about excitement and speed,” Elliott told Combat Press. “In the UFC, there has been those fights. Joseph Benavidez puts on those fights. John Dodson use to put on those fights. It has changed so much to be about scoring points and winning rounds. It takes all the excitement out of it. I am in a promotion now that it is all about the finish. Anyone on the card that gets a finish gets extra money.

“I am taking a huge pay cut, don’t get me wrong, but it is nice to know that they are going to pay guys looking for a finish. That’s how it should be. You should be getting paid for getting the finish. And you should be deducted for avoiding action and being boring, I think.”

Elliott is set to take on fellow UFC veteran Iliarde Santos, who hails from Brazil. The two men will battle for the inaugural flyweight title of Titan Fighting Championship. The card is also the first show on UFC Fight Pass for Titan FC. This will be the first title fight of Elliott’s career.

“It’s cool to get to this moment,” he said. “I have never had the opportunity to fight for a belt — not even an amateur belt. I only had one amateur fight. A bunch of my friends down here have like 10 or 12 titles, several pro titles, so it would be nice to get a little hard.”

The firsts just keep on coming for Elliott, who grew up in Wichita, Kan., which is under 200 miles from where the Titan cage will be set up in Kansas City, Mo. It’s the first time Elliott will fight in his home state.

“It’s great,” the flyweight admitted. “I have not had the chance to fight anywhere close to my friends and family in a long time, so it will be nice to actually have a little bit of hometown support.”

Elliott and his opponent logged a significant amount of time in the UFC’s Octagon. Elliott’s tenure resulted in a 2-4 UFC record. Santos, meanwhile, never found the win column over three fights in the big show.

“I don’t feel that I am not taking a step down in competition when it comes to Santos,” said Elliott. “He is a solid guy. I do, however, feel like he would be more dangerous if I fought him in the UFC compared to Titan FC with five rounds. He has a lot of power for about two rounds. Then he dies down a little bit. So this being a five-round fight, that really plays into my advantage. If I can keep from being knocked out or submitted in the first two rounds, I should be good.”

The one thing Elliott does know about this fight is that it will not be boring.