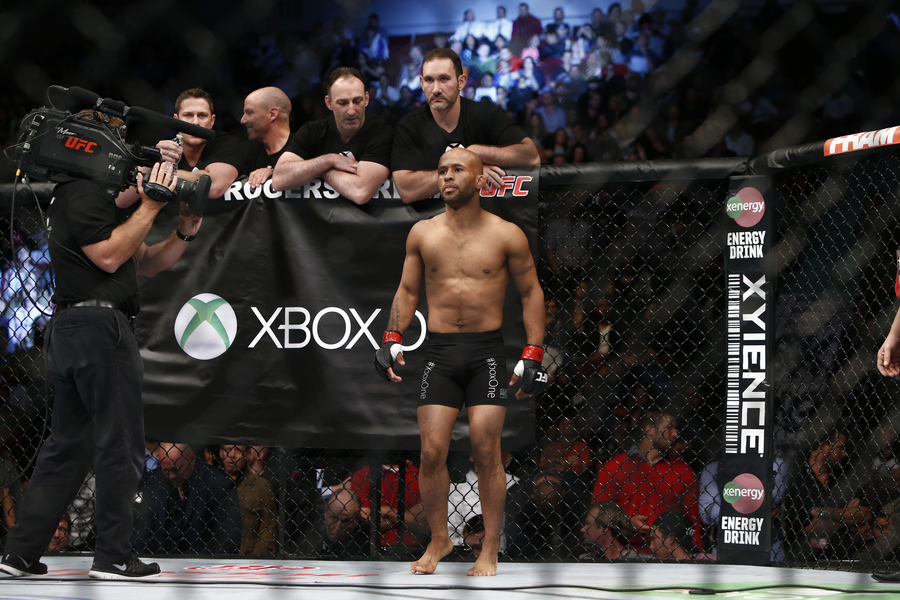 On Saturday, Sept. 27, the UFC will host UFC 178: Johnson vs. Cariaso from the MGM Grand Garden Arena in Las Vegas.

Demetrious Johnson continued to stake his claim to the title of the world’s best fighter with a second-round finish of Chris Cariaso. Johnson scored a takedown early in round one and controlled Cariaso on the mat. He maintained the upper hand when the fight returned to the feet and moved into the clinch. Cariaso threw some effective kicks in the opening seconds of round two, but he slipped and ended up underneath Johnson on the mat. Johnson maintained top position and attacked Cariaso’s arm. The champ worked for a kimura. Cariaso struggled in agony, but Johnson kept applying pressure until Cariaso tapped. Johnson added another successful title defense to his resume with the submission finish.

Eddie Alvarez made his long-awaited Octagon debut, but he failed to walk away with a victory in a war with Donald Cerrone. Alvarez opened up strong, landing a series of big punches from the clinch to Cerrone’s head. Cerrone demonstrated an amazing chin, emerging from the clinch seemingly unfazed. With Alvarez up on the scorecards, Cerrone turned the tide in round two. The Jackson’s MMA product landed with kicks and knees, slowing Alvarez and damaging his lead leg. Cerrone continued to batter Alvarez in the third frame, eventually chopping the former Bellator champion’s leg out from under him. Cerrone followed Alvarez to the mat, but didn’t produce much offense from the top position. Cerrone’s performance in rounds two and three was enough to spoil Alvarez’s debut and give Cerrone the unanimous nod with 29-28 scores across the board.

Rising featherweight star Conor McGregor backed up his words—and his prediction for the fight outcome—with a first-round TKO of Dustin Poirier. The Irishman opened the fight with a spinning kick that missed its target. McGregor and Poirier continued to exchange, with McGregor throwing the occasional spinning technique while also talking to Poirier. McGregor landed with a left hand near Poirier’s ear, dropping Poirier. McGregor followed up with punches to the downed Poirier until referee Herb Dean stepped in to end the the fight. McGregor picked up the TKO victory in under two minutes.

In an epic back-and-forth war, middleweight Yoel Romero emerged with a dramatic third-round TKO victory. Romero got the better of the striking in the opening frame, and he also scored with a takedown. Romero slowed in the second stanza, and Kennedy capitalized by rocking Romero in the closing minute of the round. Kennedy continued to land and Romero appeared to be nearly out on his feet, but he was saved by the bell. There was a delay in starting the third round, as Romero’s corner failed to remove Romero’s stool from his corner, allowing Romero more time to recover. Once the action did get underway, Romero was quick to drop Kennedy. Romero pounced on Kennedy and continued his attack. Kennedy scrambled and tried to survive, but he couldn’t avoid Romero’s punches. Referee John McCarthy stepped in to save Kennedy after just 58 seconds of round three, awarding Romero with the TKO victory.

After more than a year away from the cage, Cat Zingano made a triumphant return with a third-round TKO of Amanda Nunes. Nunes gained the upper hand in the opening stanza, landing a leg kick and taking Zingano to the mat. Nunes avoided an armbar attempt from Zingano and rained down a significant barrage of ground-and-pound. Nunes made the mistake of rolling for a leg and ended up underneath Zingano, who paid Nunes back with some ground-and-pound of her own. The second and third rounds were much better for Zingano, who controlled in both frames from the top and scored with ground-and-pound. Zingano turned it up in the third round, landing with a series of elbows and punches that bloodied Nunes. Zingano overwhelmed Nunes with continued flurries until referee Jason Herzog had seen enough. The end came 81 seconds into the final stanza. With the win, Zingano is poised to regain her title shot against reigning champion Ronda Rousey.

In a triumphant return to the Octagon, Dominick Cruz destroyed contender Takeya Mizugaki to score the first-round TKO. After a brief feeling-out process, Cruz scored a takedown and immediately swarmed Mizugaki with punches up against the cage. Cruz poured on the strikes until the referee stepped in to bring a halt to the fight after just 61 seconds.

Jorge Masvidal showed the superior striking and grappling en route to a unanimous decision nod over James Krause. The two fighters kept the contest close through the first round, but Masvidal proceeded to turn it up gradually as the fight wore on. Masvidal claimed all three rounds on two of the judges’ scorecards, with the third judge awarding a single round to Krause.

Welterweight Patrick Cote tried to use leg kicks to chop down karate-based fighter Stephen Thompson, but to no effect. Cote’s leg kicks arguably secured the first round for the former middleweight, but Thompson returned in round two to land more strikes. In round three, Thompson picked his spots and eventually rocked Cote. Cote recovered, but endured a surge of strikes which sealed the win for Thompson.

Brian Ebersole used volume striking in round three of his fight with fellow welterweight John Howard to eke out a split decision victory. Ebersole took down Howard in round one, but Howard returned the favor in round two. With the fight even heading into the final frame, Ebersole increased his volume of strikes as Howard slowed down. It was enough to convince two of the three judges to award the verdict to Ebersole.

In a clash of lightweights, Kevin Lee used superior striking, takedowns and ground-and-pound to secure a unanimous nod over Jon Tuck.

In the evening’s opening bout, Manny Gamburyan overcame Cody Gibson’s superior striking in round one and a low blow in round two to make a successful bantamweight debut. Gibson clipped Gamburyan in round two after action resumed following the low blow. Gamburyan recovered to turn in a competitive round and caught Gibson in a guillotine choke in the closing seconds of the frame to score the submission win.