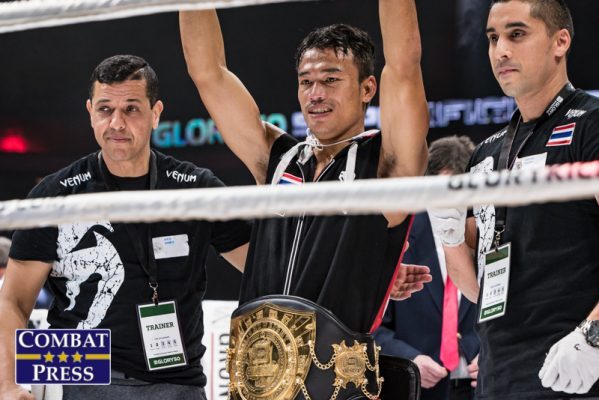 Amanda Nunes delivered another dominant performance in her UFC 224 women’s bantamweight title defense against Raquel Pennington. Pennington even admitted she was done during the break between the fourth and fifth rounds, but she was sent out for the final frame anyway. Nunes made her suffer for her corner’s decision by smashing her nose and creating a steady stream of blood pouring to the canvas. Is this enough to set up a superfight between Nunes and Cristiane “Cyborg” Justino? It’s probably the biggest fight the UFC could give Cyborg right now.

Kelvin Gastelum barely squeaked past Ronaldo “Jacare” Souza in the UFC 224 co-headliner, but the victory should firmly place Gastelum in the small group of potential next challengers for the UFC middleweight title.

John Lineker delivered another big knockout at the event when he demolished Brian Kelleher, but that finish was definitely overshadowed by Lyoto Machida’s destruction of fellow Brazilian great Vitor Belfort. Machida’s knockout win was nearly a perfect replay of the finish Anderson Silva logged against Belfort in 2011.

When will Mackenzie Dern give up on the strawweight division and move on up to flyweight? Dern missed weight by more than seven pounds for her UFC 224 fight with Amanda Bobby Cooper, but the grappling ace quickly submitted the angry Cooper. Since making her MMA debut under the Legacy Fighting Championship banner in 2016, Dern has hit the mark on three occasions. Meanwhile, she’s tipped the scales at 118.8, 120, 124.8 and 123 pounds for her other four fights. The UFC has a women’s flyweight division now, so perhaps Dern should give it a try.

Seven of UFC 224’s eight preliminary-card bouts ended in a stoppage, as did four of the five main-card scraps. The event was anything but boring.

Jon Fitch made his Bellator debut, and he posted his typical grinding performance in a decision nod over fellow UFC veteran Paul Daley. Meanwhile, Aaron Pico, Cheick Kongo and Adam Piccolotti picked up wins. Piccolotti derailed Carrington Banks, who had gone on a perfect run through his first seven professional outings.

Yoshitaka Naito is once more the best male strawweight in the world. Naito, who lost his ONE Championship crown to Alex Silva in December, eked past Silva via split decision in the pair’s rematch atop the ONE Championship: Grit and Glory card. Rubber match, anyone?

If Naito and Silva don’t have an immediate rematch, then Naito’s next challenger could be Stefer Rahardian. Rahardian is now perfect through eight pro fights after defeating Himanshu Kaushik in the ONE Championship co-headliner.

The world’s pound-for-pound best kickboxer, Sitthichai Sitsongpeenong, was able to show his superior skill set against a game youngster over the course of five championship rounds. That youngster was 20-year-old Tyjani Beztati, who fought valiantly against the “Killer Kid” in the biggest fight of his career. Beztati stuck to his game plan of avoiding the left kick, staying on the outside and using his jab to frustrate the pressuring lightweight champ. Sitthichai started taking over the fight as the third round hit. He landed a devastating knee strike while Beztati was falling through the ropes. Beztati looked visibly shaken on what appeared to be a legal strike. However, the referee stopped the bout and gave Beztati time to recover. That just wasn’t enough to bring him back into the fight once Sitthichai ultimately started landing more and continued to pressure forward. All three judges agreed that the belt remained with the champion.

The victory was Sitthichai’s 57th in his past 61 outings and his 120th win overall. There is no clear challenger next in line for the long-reigning king if GLORY doesn’t want to give Kunlun Fight champion Marat Grigorian a fourth crack at Sitthichai. Ideally, a superfight tournament at lightweight should happen soon, but it would behoove the promotion to bring in a top-ranked fighter like Chingiz Allazov or Giorgio Petrosyan to provide Sitthichai with a fellow big name as a challenger.

Anissa Meksen continued her reign of dominance over women’s kickboxing with her first title defense against the tough and durable Amel Dehby. Meksen is far and away the best female kickboxer in the world. The promotion will need to do some digging to find a proper challenger for her. GLORY always has the Tiffany van Soest rematch, but the company would be best served to have two star fighters on the roster. The promotion needs to add some depth to the division in what could become a jumping-off point for the top fighters outside of GLORY.

Petchpanomrung Kiatmookao scored his second “Knockout of the Year” contender in back-to-back fights when he threw a jumping left head kick that stopped top-10 featherweight Abdellah Ezbiri in his tracks. The 22-year-old is likely to be the next challenger for current featherweight titleholder Robin van Roosmalen. The knockout even caught the attention of the mainstream sports media:

WALK-OFF KO 33 SECONDS INTO THE FIRST ROUND!
Congratulations @Doumced!#GLORY53 pic.twitter.com/99BIjHKN2C

Qiangbang, the tournament’s runner-up, impressed despite losing in the finals. He scored a big victory over former K-1 champion Taiga and a knockout over tournament alternate Jiang Feng.

Last year’s tournament winner, Saeksen Somai, was bounced out of the field in the opening round by China’s Zhao Chongyang.

Top-ranked welterweight Artur Kyshenko stopped K-1 Global middleweight grand prix winner Timur Aylyarov in the third round of their 85-kilogram bout. Kyshenko moved up in weight from his typical 80-kilogram limit, but it’s not the first time he’s done so. He also moved up to take out current GLORY middleweight champion Alex Pereira in 2017. To think, Kyshenko started his career at 154 pounds and is currently knocking out fighters 30 pounds heavier.

History was made at Madison Square Garden on Saturday, as Vasyl Lomachenko knocked out Jorge Linares in the 10th round. A perfectly placed liver shot put Linares down to the mat. Lomachenko became the quickest fighter to win three titles in three divisions. He did so in just his 12th professional bout. The win boosts his already high stock. The two-time gold medalist Olympian has amazed viewers with his talent and skill, and Saturday was no different. However, it was no cake walk this time. Linares made Lomachenko work, even knocking him down in the sixth round. The victory sets up a highly anticipated fight with Mikey Garcia that could come either late in 2018 or early in 2019. Lomachenko appears set to meet Ray Beltran next, and Garcia is rumored to fight Robert Easter Jr. in July. If both fighters win their respective bouts, then they would square off to unify the 135-pound division’s titles.

Elsewhere on Top Rank’s card from the Garden in New York, Carlos Adames remained undefeated with a decision victory over Alejandro Barrera in the co-main event. The junior middleweight, who is just 24 years old, remains undefeated through his first 14 professional fights.

HBO held a boxing card. Don’t get used to reading that, because, as of right now, not one event is scheduled to air on the platform moving forward. On Saturday, Sadam Ali was dethroned as the WBO junior middleweight champion in what seemed like a slaughter. The 21-year-old phenom Jaime Munguia battered Ali from the beginning, knocking him down several times before the referee mercifully waved off the contest in round four. Quite frankly, the contest should have been ended after the second round, but Ali’s corner pleaded with the referee to let the fight continue.

Munguia’s stock is now through the roof. He’s a massive junior middleweight with age on his side, and it seems a bit puzzling that he was not allowed to fight Gennady Golovkin on short notice. The commission deemed Munguia not experienced enough to take on “GGG.”