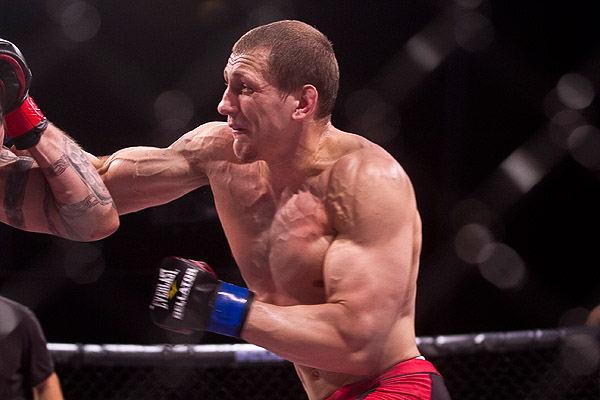 Giovanni Soldado has had a rough 2014. The reigning Coliseu Extreme Fight flyweight champion entered the year on the heels of successful performances in 2013 under the Coliseu and Jungle Fight banners, but he was forced out of his scheduled January fight with a hand injury and had a May fight scrapped when his opponent, Leandro Higo, failed to make weight. Perhaps the third time’s the charm. Soldado seeks to make his first appearance of 2014 at Coliseu’s 11th offering this weekend. He’ll defend his flyweight crown against someone who should have little issue making weight, Shooto Brazil strawweight champion Gilberto Dias.

Dias has bounced around between the bantamweight, flyweight and strawweight divisions. The Constrictor Team fighter claimed the Inka FC flyweight title in his most recent performance, a third-round TKO of Alexander Valenzuela. Dias, who debuted in 2007 but didn’t compete regularly until 2010, has nine submission victories and just one TKO finish. His other eight fights, including another five victories, came on the scorecards. He has an aggressive striking attack and effective takedowns, but he struggles to get the finish against the better fighters he has faced.

Soldado is best known to U.S. fans for his stint on The Ultimate Fighter: Brazil, where he lost via armbar to John “Macapa” Teixeira in the elimination round. Unlike most Brazilians, Soldado’s base is wrestling. The Hikari product has worked his way to four submission wins and five victories by some form of knockout. The 27-year-old debuted in 2006 with a submission loss, but he has not lost since, at least in non-exhibition contests. Soldado, a former Demo Fight bantamweight champion, competed exclusively as a 135-pounder prior to appearing on TUF as a featherweight and entering Coliseu as a flyweight. He claimed the Coliseu strap in 2013 with a submission victory over Stenio Barbosa.

This fight has the potential to be another very close and exciting scrap for both fighters. Soldado has the more complete skill set, whereas Dias is a grappler first and foremost. Soldado’s wrestling might slow Dias’s offensive attack, and the TUF alum holds the power edge on the feet. Dias has never been stopped in his career, but Soldado could change that. Soldado will hunt for the knockout, but he might have to settle for the decision instead.

The first half of September is a monumental time for the ladies of the strawweight division. Sept. 10 marks the premiere of The Ultimate Fighter 20, which serves as a tournament to crown the UFC’s first strawweight champ. Meanwhile, Invicta FC is set to crown its new champ at its Sept. 6 show. Not to be left out, Jungle Fight has found two undefeated 115-pounders and paired them in a title fight of its own. Maiara Alves and Ericka Almeida take the featured spot on Jungle Fight 73, the 11th anniversary edition of the Brazilian show, and battle for the gold.

The 27-year-old Alves made her pro debut in 2011 and rattled off two wins within her first five months of action. The Nocaute Vicente Team fighter went inactive after the second of those victories and didn’t return until May 2014, when she outworked Bianca Bento for a unanimous decision win. The combined record of her three victims currently stands at 1-5, and Bento represents the only fighter on that list to hold a professional win. The W-Combat veteran has seen the third round in all of her fights, but she was able to secure a late armbar win in her second outing against the debuting Catia Dias de Oliveira.

Almeida is returning for this fight after an extended layoff of her own. The 25-year-old debuted in 2011 and scored five stoppage wins, but she hasn’t seen action since 2012. Training out of Academy Octavio Almeida and the Herman Gutierrez Team, Almeida has relied heavily on her submissions. However, the Brazilian grappler does have one victory by way of TKO. The combined record of her opponents stands at 9-20, but she does hold a victory over XFC International competitor Vanessa Guimaraes. Almeida is already under contract with Invicta FC, but she’ll have an opportunity to shed the ring rust and put some gold around her waist prior to entering the Invicta cage.

This fight holds a lot of question marks for the fighters involved. Almeida had a standout run from 2011-12, but it’s now late 2014. Will her lengthy layoff affect her performance? Alves has already returned with one fight this year, but the list of competition throughout her career leaves something to be desired. Is she capable of stepping up and defeating a legitimately tough opponent? Furthermore, from a record standpoint, this is the toughest competition either lady has faced. Do they have what it takes to impress and take their games to the next level?

Alves hasn’t been much of a finisher in her career. Even her one submission win required more than two rounds of effort. Almeida has been the exact opposite, providing fans with quick finishes in every one of her outings. Almeida is patient and willing to fight off her back. If Alves puts Almeida on the mat, she’s in danger of getting caught in an armbar or triangle choke. Almeida isn’t as skilled in the takedown or striking departments, though. She’s stiff on her feet and leaves herself open to get tagged, and her takedown attempts are just as likely to end with her in the bottom position as anything. She doesn’t mind fighting off her back, however, which should give her an edge in this contest.

Alves has proven to be a grinder, but that’s against some seriously weak competition. Almeida might have some major holes in her game, but her grappling abilities will make the difference in this encounter. The younger fighter will work toward a submission victory late in the first round.

During the height of Fedor Emelianenko’s reign as the best heavyweight and pound-for-pound fighter in the MMA world, M-1 Global rose in prominence. With Fedor out of action and M-1 Global’s lack of an alliance with a promotion such as Strikeforce or Affliction, the Russian promotion hasn’t enjoyed as much of the spotlight lately. However, that doesn’t mean the company has stopped producing intriguing fights and top prospects. Case in point, the headliners of M-1 Challenge 51. Ramazan Emeev currently sits atop the M-1 middleweight division, but he puts his title on the line against a very dangerous challenger in Vyacheslav Vasilevsky.

Emeev captured the middleweight crown with a unanimous decision victory over UFC veteran Mario Miranda in late 2012. The two engaged in a rematch in April 2013, and Emeev brought a more decisive close to that bout when he scored a third-round knockout. His defense against Vasilevsky will be his first action in more than 16 months. The 27-year-old launched his pro career in 2009 and went a disappointing 3-2 through his first five outings. Now, he’s on an eight-fight winning streak. He has fought out of the Gorec camp, but has ties to Team Highlander as well. Emeev has a well-rounded skill set which has led to two victories by some form of knockout and five by way of submission.

Despite entering this fight as the challenger, Vasilevsky is the more accomplished and better known prospect. The 26-year-old has a long history of fights under the M-1 banner, but he also ventured to Bellator MMA in 2012. He went 1-1 inside the Bellator cage during the season-six middleweight tournament, but he avenged his decision loss to Maiquel Falcao with a 37-second TKO victory over the Brazilian in August in the League S-70 promotion. The Red Fury Fight Team and Tiger Muay Thai product is a highly accomplished sambo practitioner who holds the rank of First Razryad Grand Master in combat sambo. He also holds a black belt in judo and a purple belt in Brazilian Jiu-Jitsu. Vasilevsky is a former M-1 light heavyweight champion.

Vasilevsky’s biggest edge comes in the experience department. Despite an age difference of just one year, Vasilevsky has twice as many fights as his counterpart. The former M-1 light heavyweight champion has also seen an extensive amount of higher level competition, including the two Falcao bouts and fights against Trevor Prangley, Victor O’Donnell, Xavier Foupa-Pokam and Daniel Tabera (the only other man who has defeated Vasilevsky). “Slava” can be sloppy at times, but he has sneaky trip takedowns that could come in handy in the clinch against the more traditional wrestling-based takedowns of Emeev. Emeev has displayed a recent uptick in power and skill on his feet, but he’s fighting a challenger who has 10 wins by some form of knockout and seven victories via submission.

Vasilevsky has a strong skill set and a wealth of experience, but this still projects as a close fight. Emeev has solid takedown defense, but he might not be prepared for Vasilevsky’s trip-heavy takedown style. Vasilevsky, meanwhile, probably won’t be able to stop all of Emeev’s takedowns and could struggle from his back. On the feet, the pair will trade bombs, and either could score the knockout. Despite both fighters checking in at 5-foot-10, Vasilevsky fights long compared to his foe. He should be able to land more punches and mix in enough takedowns to score the decision in a hard-fought contest.