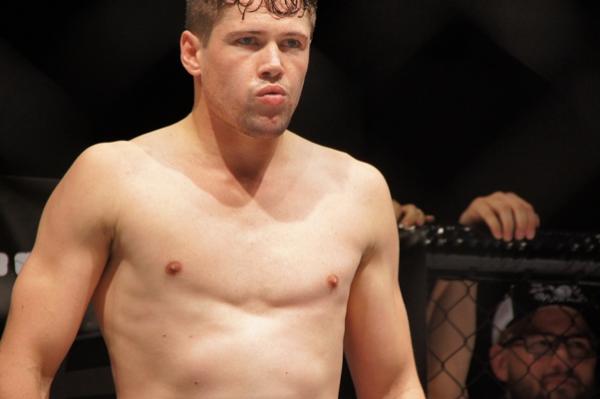 It’s a week for championship action on the international circuit. Russia’s M-1 Global organization is getting in on the action with its 102nd numbered event, which features three title tilts. The card is stacked from top to bottom, but undefeated welterweight titlist Shavkat Rakhmonov catches the bulk of our attention for his scheduled defense against Tiago Lacerda.

The 24-year-old Rakhmonov brings a perfect 11-0 mark to the ring for this fight. The combat-sambo specialist from Kazakhstan has bounced between M-1 and the far smaller Battle of Nomads series. He captured the latter’s welterweight strap and then returned in his most recent M-1 appearance to snag the bigger organization’s belt with a TKO referee stoppage of Daniil Prikaza. The prospect has notched finishes in each of his pro outings, beginning with a first-round submission of Adam Tsurov in 2014. He has amassed a near-even split of knockouts and submissions along the way.

Rakhmonov’s upcoming challenger is the 29-year-old Brazilian Lacerda. “Bahia” has taken part in 35 professional fights since debuting in 2010, but he has had a far rockier road than his counterpart. Lacerda rolled through his first 18 opponents, including recent Professional Fighters League participant Andre Lobato, without a single blemish. His first setback came in a 2012 regional bout against Silmar Nunes. The loss was the spark of a far more mediocre stretch for the Roxo Strike Team member in which he has gone 10-6-1 with one no-contest. He suffered a loss to the aforementioned Lobato in this time period, and he also fell to Edvaldo de Oliveira and Bruno Silva, among others. Lacerda’s most notable win came via majority decision against M-1 staple Sergey Romanov.

Lacerda has put up solid finishing numbers, including 16 victories by some form of knockout and seven via submission. He’s only been tapped three times in his lengthy career, and he’s never been knocked out. Those submission losses, though, could hint at the Brazilian’s fortunes in this showdown with Rakhmonov.

The 24-year-old Kazakh fighter has been a true force on his march to the M-1 throne. However, he appears to have taken the path of least resistance in capturing the crown. He grabbed a smaller promotion’s title with a victory over a 2-1-2 foe and used it as a springboard to an M-1 title fight. He has not faced any of the top talents in M-1, including the aforementioned Romanov or longtime division staple Alexey Kunchenko. In other words, Rakhmonov still has a lot to prove.

Despite any reservations about Rakhmonov’s resume, the reigning champ still has to be viewed as the favorite against a fighter who has put up an underwhelming mark through his last 18 fights. Lacerda will try to keep this fight close and pull off another stunner like he did in his win over Romanov, but to survive five rounds against a finisher like Rakhmonov is quite a tall task. This one should end with a submission victory and a successful title defense for the champ.

Bantamweights Askar Askar and Jake Childers aren’t headlining the 70th show from the Legacy Fighting Alliance. The undefeated up-and-comers aren’t even in the co-main event. However, they still stand out as two of the brightest prospects in the lineup and deserve some attention.

Askar, a product of the Midwest Training Center, went 6-1 as an amateur before shifting to the pro level in 2015. He actually had four fights scrapped before finding a first pro opponent in Jake Lamb, whom Askar destroyed via strikes in the first round. After a five-fight winning streak under the Hoosier Fight Club banner, he landed in Titan Fighting Championship, where he earned a decision victory over fellow undefeated prospect James Blair. The 24-year-old’s bad luck continued with another four scrapped opponents, including future Bellator fighter Ricky Bandejas. He did post a successful 2018 campaign that included a trio of victories spanning across Victory Fighting Championship, the LFA and the aforementioned Hoosier FC. This run included a step up in competition against Derrick Mandell and Dennis Dombrow, both of whom dropped a decision to Askar.

The 30-year-old Childers opted for a long stint at the amateur level, where he compiled a 14-4 record. “The Working Man” finally made his pro turn in 2017. He stuck to low-level competition, including a 10-14 opponent, through his first five pro fights spanning a number of different promotions. Childers made his first LFA appearance in a February win over prospect Josh Marsh, easily the best fighter he has faced at the professional level.

While Childers does have several ammy losses, they’ve hardly come against bad fighters. Justin Wetzell has gone on to post four wins over five pro fights, Cain Lugar is now 3-1 as a pro, and Childers avenged his loss to Jared Richardson, who is now 7-1 at the amateur level. Only Brent Lee, who is 0-1 as a pro, hasn’t found sustained success.

The Illinois-based Childers tends to hunt for the submission, but Askar is likely to be more vulnerable to the knockout. His only defeat across his combined amateur and professional career came via knockout at the hands of David Garcia. If Childers can clip Askar, then he might have a chance at a finish. If he can’t, then he’ll have to deal with Askar’ superior striking abilities. The Midwest Training Center fighter is skilled at turning the lights out on his opponents, and he’ll punish Childers here for trying to drag the fight to the mat. This one ends in a TKO for the Chicago-based Palestinian.

It’s almost as if Britain’s Cage Warriors organization saw the M-1 Challenge 102 lineup and said, “Hold my beer.” The 106th edition of Cage Warriors is aptly titled “Night of Champions,” as it features twice as many title bouts — six, to be exact — as the M-1 event. Perhaps the most interesting of these affairs is the welterweight scrap between champion Ross Houston and interim titleholder Nicolas Dalby.

Dalby remains the more familiar name to UFC fans. The 34-year-old had a four-fight stint with the company in 2015-16. He was dropped after going winless in his final three Octagon appearances. Now, Dalby seeks his fourth straight promotional win and a successful unification of the interim welterweight title he won in his most recent affair against Alex Lohore. Dalby debuted in 2010 and compiled a perfect mark through 11 fights before entering Cage Warriors. He posted victories over Glenn Sparv and Ivica Trušček (twice) during this run. He won the Cage Warriors welterweight crown in his promotional debut and made one successful defense before departing for the UFC. Inside the Octagon, Dalby posted a very deceptive 1-2-1 record. His victory came over Elizeu Zaleski, who now resides inside the UFC’s top 15 as a welterweight. He fought to a majority draw with future title challenger Darren Till, but dropped off a cliff with decision losses to Zak Cummings and Peter Sobotta. Once he departed the UFC, Dalby returned to Cage Warriors and suffered a third straight loss in a split verdict against future UFCer Carlo Pedersoli. He has gone on to right the ship with wins over Roberto Allegretti, Philip Mulpeter and the aforementioned Lohore.

Scotland’s Houston is an SBG Ireland export, but he also trains out of the Jiu-Jitsu Misfits camp. The upstart went 6-2 as an amateur, but he avenged one of those losses — a decision defeat at the hands of Steven McCreadie — by scoring a submission finish in a rematch. As a pro, “The Hitman” has managed to emerge unscathed through eight fights. His first two victories, a decision and a submission finish, came against rookie opponents. He has since added an additional five wins against adversaries who sported winning records when they met Houston. This run included back-to-back wins over the same fighter, Aaron Khalid. This run earned him a shot at Cage Warriors gold. He squeaked past Stefano Paternò to take the title, but he has been sidelines ever since.

There is no love lost between these two men. Dalby has accused Houston of running away from title defenses and faking an injury. Houston shot back to say he’d run through Dalby in their upcoming fight. Well, now it’s time for each man to back up his words. The winner could also punch their ticket to the UFC.

Houston’s specialty is the ground game. He’s found three submissions as a pro, and he also had several submissions as an amateur competitor. He’s patient as he works to advance position and hunt for the neck or a limb. He looks stiff in the stand-up, however, and might leave himself open to take some heavy blows.

Dalby, who hails from Denmark, is certainly capable of landing those blows, too. The UFC veteran has a background in karate and trains out of Rumble Sports in Copenhagen. He’s engaged in extremely close fights with two current members of the UFC’s welterweight top 15, and he has also registered six career wins by some form of knockout. The Dane is also not out of his element on the mat, where he has secured four submissions. His losses have all come on the scorecards.

One of Dalby’s criticisms for Houston involved how the current champion barely snuck past Paternò to grab the title. While it came in the form of smack talk, Dalby does have a point. Houston didn’t exactly cruise to an easy win, and he doesn’t have many notable names on his resume. Dalby, on the other hand, has the luxury of ring time against UFCers Zaleski and Till in hard-fought bouts, including a “Fight of the Night” winner in the latter contest. Dalby struggled in his first UFC run, but he should outwork and potentially even finish Houston to get a second chance in the big show.