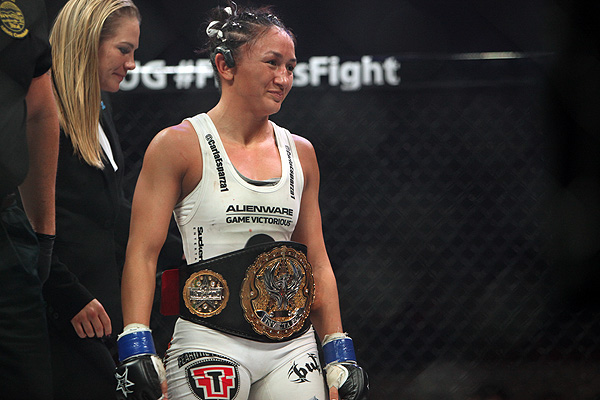 Dropped out of the rankings: Felicia Spencer (7)

The month of May saw Macy Chiasson storm into the rankings, as she defeated Norma Dumont in impressive fashion. That, in unison with Felicia Spencer dropping out from retirement/inactivity, kept the rankings steady otherwise. Kayla Harrison took a win at 155 in the PFL 2022 tournament over Marina Mokhnatkina. On the flip side, Julia Budd lost to Genah Fabian at 155 pounds, so that does not affect her ranking at 145. Looking into June, two ranked fighters will square off in Bellator as Cat Zingano takes on Pam Sorenson.

Dropped out of the rankings: Germaine de Randamie (3)

The month of May saw a major shakeup, as Ketlen Vieira made a major move at 135 in beating Holly Holm. Also, Germaine de Randamie dropped from the rankings due to inactivity, Pannie Kianzad moves into the top-10 as a result. As of now, no ranked fighters are set to fight in June.

Dropped out of the rankings: Andrea Lee (9)

The month of May saw some top 125ers compete. Katlyn Chookagian scored a major win over Amanda Ribas to put herself back into top contender talks. Viviane Araujo re-enters the rankings after a solid win over Andrea Lee. Looking into June, top dog Valentina Shevchenko looks to defend her UFC title yet again when she takes on Taila Santos.

The month of May was major, as Carla Esparza won the UFC title off Rose Namajunas and take the number-one ranking. Looking into June, Joanna Jedrzejczyk and Weili Zhang look to run back their Fight of the Year from a couple years ago when they meet at UFC 275.

Dropped out of rankings: Kanna Asakura (7)

Jillian DeCoursey made a big move in May, as she stormed into the rankings after a vicious knockout of Lindsey vanZandt. That pushed Kanna Asakura out of the rankings after a major reset. Alesha Zappitella moved up to 115 in May for a title fight in Invicta, but fell to Emily Ducote. Saori Oshima scored another win to secure her spot in the rankings, defeating Moeri Suda. As of now, no ranked fighters are scheduled to compete in June.