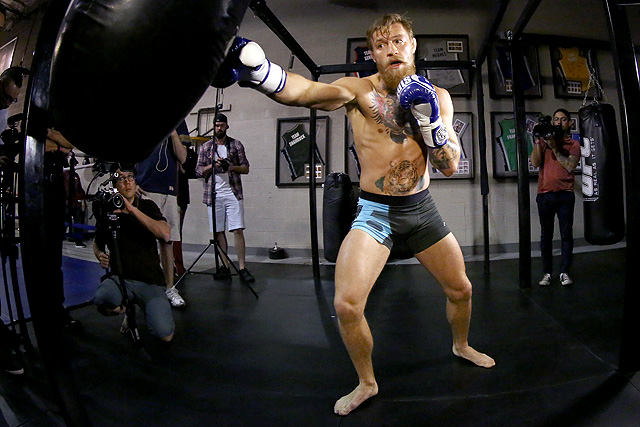 Conor McGregor Should Be Allowed to Defend Both UFC Titles

The UFC made history at UFC 205 on Saturday, Nov. 12. The company shouldn’t rest on its laurels, though. It should continue making history, with its biggest star leading the way.

Conor McGregor became the first UFC fighter to hold two belts in two weight classes simultaneously when he defeated Eddie Alvarez for the lightweight title at UFC 205. Since he was already the UFC featherweight champion, McGregor demanded to be given two title belts after his victory. With an assist from welterweight champion Tyron Woodley, McGregor received his second belt and pretty much hasn’t put them down since:

The narrative going into UFC 205 was that if McGregor defeated Alvarez for the lightweight title, he would have to relinquish one of the belts. Needless to say, McGregor wasn’t having it, saying the UFC would “need an army” to take away either belt from him. Cooler heads seem to be prevailing, for now anyway, as McGregor is likely still parading around both title belts as we speak — as well he should.

Why would the UFC want to force McGregor to give up one of his titles? This is the first time the UFC has had a double champion. That person happens to also be far and away the organization’s biggest star to boot. While UFC Hall of Famers B.J. Penn and Randy Couture both held titles in two weight classes, neither of them held both titles at the same time.

An argument circulating out there is that McGregor’s pursuit of fights in various weight classes has created a logjam in the first division — featherweight — where he held a title belt. It’s true that McGregor hasn’t defended that title since he knocked out José Aldo in December 2015 to win it. The fight was Aldo’s first title defense in more than a year, due to injuries and other factors, and the Brazilian previously went a year or more between defenses of the featherweight crown. So let’s not pretend that McGregor is committing some unique, egregious foul by not defending the 145-pound strap for the last 11 months.

Plus, there are so many juicy match-ups awaiting McGregor at both featherweight and lightweight. In the featherweight division, he would likely face Aldo, the current interim featherweight champ as a byproduct of McGregor’s ventures into other weight classes, in a rematch. Max Holloway and Anthony Pettis will face each other at UFC 206 next month, and it’s not a stretch to imagine that the winner of the fight would be due for a title shot. Now, tell me the idea of McGregor facing a former champion like Pettis doesn’t get you excited.

At lightweight, there are even more exciting options for the Irishman. Tony Ferguson just dominated former champ Rafael dos Anjos earlier this month and is in the midst of a nine-fight winning streak. Khabib Nurmagomedov smothered Michael Johnson on the same UFC 205 card where McGregor claimed his second title, and he called McGregor out for a lightweight title fight. McGregor has already dismissed Nurmagomedov as a potential opponent for his first lightweight title defense, but he should reconsider.

A fighter with strong ground skills is still considered McGregor’s bug-a-boo by many, so fighting Nurmagomedov would present an interesting contrast in styles. At the same time, McGregor has already dispatched guys with good ground skills like Alvarez and Chad Mendes. But don’t you want to see McGregor fight a guy who allegedly wrestled bears in his youth? I know I do.

The UFC has never had a star like McGregor. Not Jon Jones, not Anderson Silva, not Georges St-Pierre, and not even Ronda Rousey matches up. McGregor is truly in a league all by himself. Besides the fact he should receive more consideration as the best pound-for-pound fighter on the planet, his dual championships just adds to his aura.

McGregor is also possibly the most driven and focused fighter the UFC has ever seen, as evidenced by the fact he apparently called his shot a couple years ago:

Instead of forcing McGregor to relinquish one of the title belts he won in spectacular fashion, UFC President Dana White and company should continue riding the coattails of the fighter who pushed the organization to new heights at UFC 205. The company should let McGregor continue putting on memorable performances against the very best in two of the UFC’s deepest divisions.