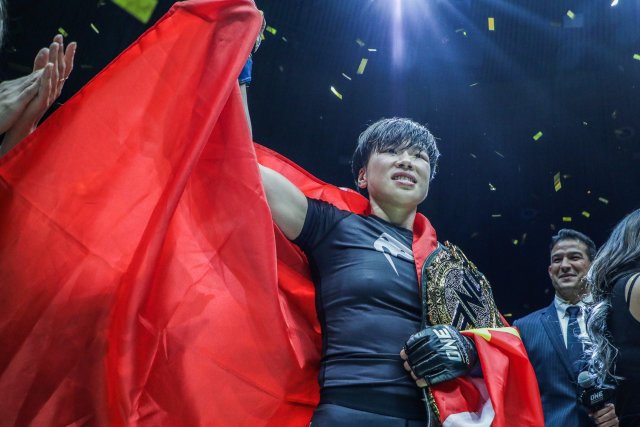 At the top of the bill, “The Panda” Xiong Jing Nan welcomes the latest challenger to her ONE Strawweight World Championship, Ayaka Miura. The talented Japanese athlete has won seven of her last eight contests and is coming off an impressive first-round submission victory over Rayane Marques Bastos in May. Xiong has reigned as the strawweight queen since its inception, and she shows no signs of relenting any time soon, so this should make for an interesting battle.

In the co-main event, Murat Aygun finally gets his shot at Roman Kryklia and the ONE light heavyweight kickboxing world championship. The slugfest for the gold was originally supposed to happen in 2020, but it had to be delayed due to COVID-related safety protocols. The bout will be Kryklia’s second title defense since claiming the inaugural belt with a TKO win over Tarik Khbabez in Nov. 2019, and Aygun will be looking to snatch the strap off him.

Along with these two crucial fights, Saemapetch Fairtex and Tawanchai PK.Saenchai Muaythaigym will collide in a must-see bantamweight Muay Thai battle for the ages as Saemapetch defends his top-ranked spot in the division.

ONE Championship: Heavy Hitters will also feature the highly-anticipated organizational debut of Saygid Izagakhmaev. The Dagestani athlete will have his mentor and teammate Khabib Nurmagomedov in his corner as he comes up against former University of Nebraska wrestling standout James Nakashima.

16-year-old wunderkind Supergirl makes her return to The Home of Martial Arts against Ekaterina Vayearndareyva, kicking off what is set to be a massive year for the women’s strawweight Muay Thai division. The winner of this contest could put their name in the hat for the impending inaugural title contest. Closing out the six-bout main card will be a strawweight MMA bout that will surely set the tone for the rest of the evening. Jeremy Miado and Senzo Ikeda clash in a three-round war that is sure to kick-start the main card with an influx of high-paced action.

And that’s just in mixed martial arts bouts. The final two lead card matches are from the ONE Super Series with Elias Mahmoudi coming up against Walter Goncalves in a flyweight Muay Thai match-up, and Beybulat Isaev taking on Giannis Stoforidis in a light heavyweight kickboxing contest.

You can catch all of the action of ONE: Heavy Hitters on YouTube beginning at 5 a.m. ET on Friday, Jan. 14.