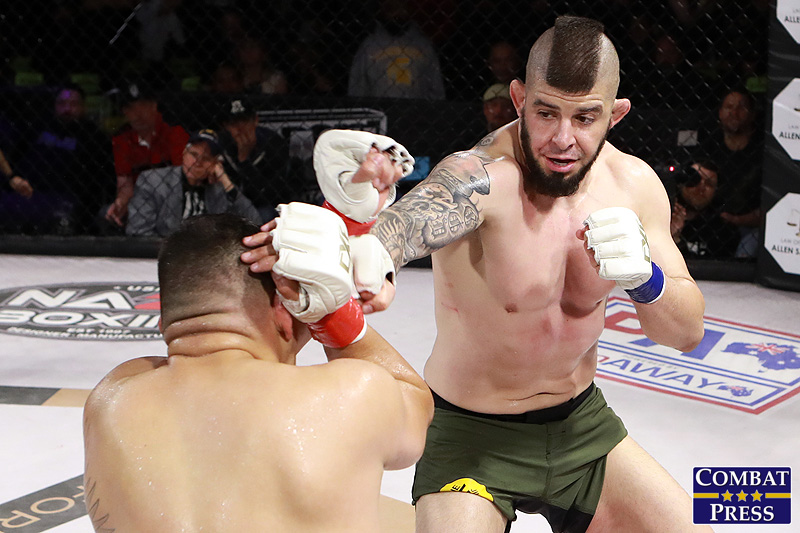 MMA action on the regional and global level is finally heating up after a few weeks of holiday break. The UFC isn’t the only organization getting back in gear. The Legacy Fighting Alliance is set for its first event of 2020. The company survived an at times tumultuous 2019 and now checks in with its 80th show, which will be broadcast on its new streaming home on UFC Fight Pass. The headliner is a solid featherweight fight, but we love undefeated fighters, so our attention goes to middleweight upstart Jordan Wright. Wright, who is perfect through nine pro fights, will be tested by former LFA title hopeful Gabriel Checco.

The 28-year-old Wright is officially perfect, but that only remains true thanks to bad judgment on the part of his most recent opponent, Anthony Hernandez, who failed a drug test after knocking out Wright in just 40 seconds. The result of the Dana White’s Tuesday Night Contender Series bout was overturned to a no-contest, leading to the reinstatement of a zero in Wright’s loss column. Prior to that lone misstep, the Jackson-Wink fighter had tallied nine finishes, including five submissions and four knockouts. Every single one of those wins came in the first round, and Wright has never actually had to compete for more than three minutes in any single contest. “The Beverly Hills Ninja” was inactive in 2019 and is now a year and a half removed from his most recent fight.

Checco, 33, made his professional debut in 2012 and stormed through his first seven opponents with ease. Most of those adversaries were low-level fighters, and four of his opponents were making their pro debuts. He ran into trouble when he upgraded to fights in the Resurrection Fighting Alliance. Jake Collier handed Checco a submission loss at RFA 19 in a middleweight title fight. “Zangief” bounced back with a 74-second TKO finish of The Ultimate Fighter 11 alum Joseph Henle, but stumbled once more in another crack at the RFA title against Francisco France. Checco righted the ship with a pair of submission victories, including a third-round stoppage of Adam Stroup. After a long hiatus, the Brazilian returned in 2018 to fight for the LFA crown, but a loss to future UFCer Ian Heinisch sparked a rough patch in which he lost back-to-back fights. Checco did bounce back with a win over Angel DeAnda in July, but much of his efforts have been focused on grappling competition lately. He has six finishes by some form of knockout and five submission victories on his resume. The highly decorated Brazilian Jiu-Jitsu black belt has trained out of Chute Boxe, Gracie Humaita, the B9 Team and Xtreme Couture.

Checco’s a known commodity. He has the skills to contend at this level, but the inconsistency to miss out on true glory. He is a veteran presence, though, and one who can give us some real insight into whether Wright is for real. Checco served as a gatekeeper for the aforementioned Collier, France and Heinisch, all of whom jumped to either the UFC or Bellator after beating the Brazilian. All eyes will be on Wright.

There’s some bad news here, though. Of course, there’s the overturned Contender Series steamrolling that Wright suffered at the hands of Hernandez. However, there’s also a weak resume from his first nine outings. Yes, they were all quick stoppages, but his first eight wins came against a set of opponents with a combined mark of 1-38. That’s not a typo. Wright’s only notable victory is his LFA 30 submission of Craig Wilkerson, who entered the bout at 7-3.

Checco is far from a stud at this point, but he’s at least battle-tested against fighters who aren’t 0-21, 0-10 or 0-5. Wright has an uphill battle here. His tendency for quick starts could lead to a highlight-reel ending in his favor, but it could also backfire. Checco should be considered the favorite at this point, bringing an end to Wright’s undefeated run with a knockout finish.

Poland’s Fight Exclusive Night promotion usually plays second fiddle to KSW, but January seems to be the time when FEN really shines. Its 27th event is a perfect example. The league has paired lightweight champion Mateusz Rębecki against challenger Magomed Magomedov for the evening’s marquee bout.

Rębecki has been a FEN regular for several years now after initially competing on smaller shows. He debuted in 2014 and won his first three fights, including a sophomore outing against veteran Semen Tyrlya, by first-round heel hook. “Chińczyk” took a loss in his fourth fight when he was knocked out by fellow undefeated up-and-comer Paweł Kiełek. He entered the FEN organization for his next fight, a 2015 victory over Jacek Kreft via armbar. After a lengthy layoff, the 27-year-old returned in 2017 and marched through three foes en route to the league’s lightweight championship, which he won with a knockout of 24-fight veteran Marian Ziółkowski. The Berserker’s Team fighter defended has made two successful defenses of his title while also recording a win under the Battlefield FC banner.

Magomedov made his debut in 2011 and won his first seven fights. The 29-year-old’s best opponent in that stretch was Albert Shangaraev, who entered the fight as a 2-0 prospect. Four of his remaining six foes were rookies and another was winless at the time. Once the “Cobra” stepped up against a more experienced opponent in Artur Karavaev, he faltered. He also suffered an exhibition loss to Arman Tsarukyan around the same time. Magomedov rebounded with five additional wins, this time against a consistently increasing level of competition. The Ferrum Fight Club export recorded his most notables wins against Artur Lemos and Arnaud Kherfallah.

Rębecki is a compact wrestler. The champ is likely to shoot for takedowns and attack the legs if he gets a chance, but his wrestling tendencies also leave him at a big disadvantage. Rębecki has a habit of leaving his neck out for the taking and squandering top position in scrambles or during takedown attempts. Magomedov has seven submission finishes and often looks for the choke, so Rębecki will have to be careful in this fight.

Magomedov is set to take a huge leap up in competition. Rębecki is an established champion who has turned back a number of challengers with equally as impressive records. Magomedov probably isn’t up for this challenge. He’s likely to be out-wrestled and out-grappled en route to a submission loss.

The Brave Combat Federation is poised to follow up a strong 2019 campaign with a solid 2020 debut. The league is headed to Slovenia for its first show of the year. You can watch the fights, which are hosted in cooperation with local promotion WFC, right here on Combat Press, courtesy of Fite TV. Among the scheduled bouts on the card, the flyweight scrap between UFC veteran Zach Makovsky and undefeated prospect Velimurad Alkhasov stands out.

Alkhasov is perfect through six pro fights. Since debuting in 2014, he has handed out the first losses on the records of Elnar Ibragimov and Aleksey Pastorov, fought to a split verdict against veteran Mikael Silander, dropped 19-5-1 prospect Ruslan Abiltarov, and decisioned respectable veteran foes Sean Santella and Marcel Adur. The latter of those contests was to be a Brave CF flyweight title contest, but Alkhasov missed weight and was not eligible to claim the title despite his victory. Alkhasov has stopped two opponents via strikes and one by way of submission. The flyweight upstart is a national champion in sambo in his native Russia.

Makovsky should be the most familiar name to American fans among the contingent in this week’s feature. He initially made a name for himself as a bantamweight champion with Bellator MMA. In 2013, he joined the UFC and went on to win three of his first four fights inside the Octagon. After going on a three-fight skid, albeit against a trio of title contenders, Makovsky was jettisoned by the organization and landed in the Russian regional scene, where he went 1-1.

Makovsky was once considered a top flyweight fighter, but he couldn’t get over the hump while facing the likes of Jussier “Formiga” da Silva, John Dodson, Joseph Benavidez and Dustin Ortiz. He did beat Scott Jorgensen, Josh Sampo and Tim Elliott, however, and also holds notable wins against Nick Mamalis, Ed West, Chad Robichaux and Matt Manzanares. “Fun Size” clearly reached his ceiling while with Bellator as a bantamweight and the UFC as a flyweight, but he’s no slouch by any means. The 36-year-old has spent time at the Tristar camp and should still be viewed as a threat to any prospect in the international circuit. Even his most recent loss came to Yoni Sherbatov, a participant on the 24th season of The Ultimate Fighter. Unfortunately, Makovsky has been out of action since that 2017 defeat.

Alkhasov isn’t doing much better when it comes to staying active. He’s now a six-year veteran with only seven fights — he fought to a no-contest with Rasul Albaskhanov — which works out to an average of just over one outing per year. He fought twice in 2018, but did not compete in 2019. The pint-sized Russian obviously needs to get busy if he wants to draw more attention his way. That said, he has been impressive when he does compete. His decision nods over Santella and Adur give him victories against a current Cage Fury champion and a veteran Brazilian fighter, respectively.

The factor of ring rust should be a moot point in this fight. The real question will be whether Alkhasov can handle the wrestling of Makovsky. If the American gets the fight to the ground, he could grind out the 13th decision victory of his career. Alkhasov’s sambo base could provide him with the necessary answers to those takedowns, though, and allow the Russian to get the upper hand. Alkhasov has already demonstrated his skills against formidable opponents in Santella and Adur, so a win over Makovsky on the scorecards is not a huge stretch.