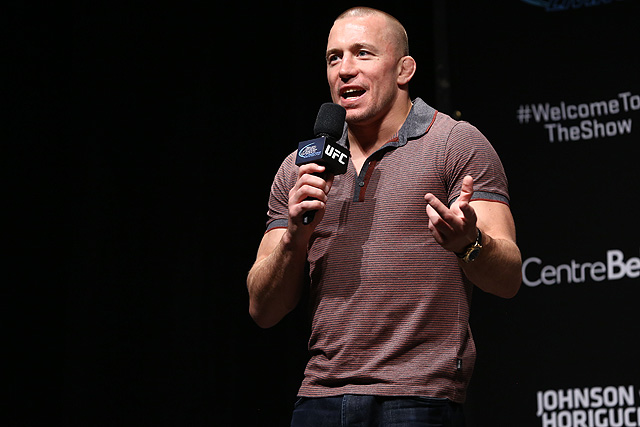 Georges St-Pierre’s return couldn’t have possibly come at a better time. With former UFC women’s bantamweight champion Ronda Rousey’s continued participation in the sport extremely questionable and current UFC lightweight champion Conor McGregor on hiatus, there is a void to be filled by someone. Anyone, really.

St-Pierre is perhaps the greatest fighter of all time, depending on who you ask. So, it’s no surprise that during his time he was one of the biggest pay-per-view draws the UFC had on its roster. He took part in some of the biggest cards the UFC has ever had, including UFC 100 and the UFC’s first trip to Toronto for UFC 129 in a headlining spot against Jake Shields. GSP’s pay-per-views were unmatched by anyone not named Brock Lesnar.

St-Pierre was part of the second wave of great fighters that paved the way for the normalization of mixed martial arts in the mainstream. He graced ads for Under Armour, took part in movies — most notably [i]Captain America[/i] — and was routinely one of the biggest faces for the promotion.

Now, St-Pierre is set to make his return three years later in a much different landscape than the one he left. Three years doesn’t sound like a lot, but in a sport that is constantly evolving and changing, it might as well be over a hundred years.

Take into account that Rousey was about to make her second title defense when GSP retired. Meanwhile, McGregor only had two fights in the UFC and was still a couple of fights away from the start of his own hype train when he defeated Dustin Poirier at UFC 178. The welterweight strap St-Pierre once held has gone to three separate fighters — Johny Hendricks, Robbie Lawler and Tyron Woodley — since the Canadian’s departure.

GSP’s return comes with a big opportunity. The former champ can fill a void. He can certainly plug up some holes in UFC’s ship, which is leaking (and lacking) true mainstream superstars.

St-Pierre isn’t going to deliver McGregor-like pay-per-view numbers. Those kind of numbers seem a little out of range, even for the returning GSP. St-Pierre is a huge draw, but McGregor is on a different level that no fighter has really ever seen. However, St-Pierre will typically draw in a good range of around 700,000 buys, which, for the UFC, is a great investment for the one fight it will get from him this year. We aren’t talking about St-Pierre fighting three times this year, something he hasn’t done since 2007. We’re looking at one fight while McGregor takes a hiatus.

St-Pierre is expected to step up to the middleweight division, where he’s set to clash with Michael Bisping for the UFC middleweight crown. This title fight will sell near the top of GSP’s career. The highest number GSP pulled was 950,000 for UFC 158 against Nick Diaz. Now, we’re talking about the return of a legend against someone as charismatic as Bisping. A buyrate of 900,000 seems like a very reasonable number.

There is a new fan base around that may not know GSP as anything more than the legend he is. Some may not even know him at all. These are factors that make a solid number difficult to project. How the new fan base receives St-Pierre is up in the air. He isn’t a talker like McGregor, and his style isn’t a big selling point either. Heck, people complained in his first run that he played it too safe. (Those people were wrong, though, because he was so good at exploiting the weaknesses of his opponent. Striker? Take them to the ground. Grappler? Outpoint them with a stiff jab and a strong follow-up. GSP beat people at their own games and dominated them.)

St-Pierre remains a smart and solid stopgap measure for the UFC to count on with the hiatus of McGregor and Rousey’s exit from fighting. The UFC needs GSP while it waits on McGregor’s return and the emergence of a new wave of superstars.