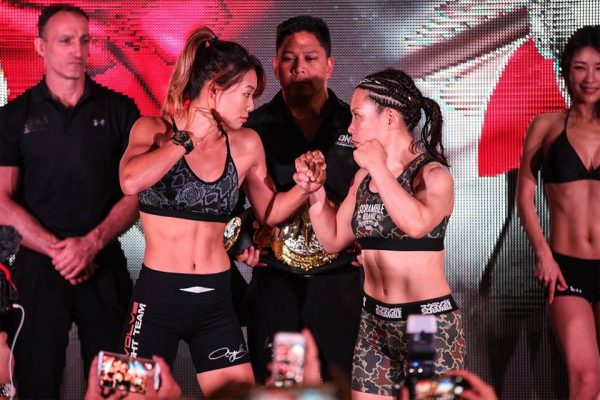 ONE Championship: ‘Ascent to Power’ Preview and Predictions

ONE Championship’s first female title is on the line when one of the promotion’s biggest stars, Angela Lee, gets an opportunity to prove herself against multiple-time champion, Mei Yamaguchi. Lee has already become one of the most notable female fighters in Asia just five fights into her budding career. Yamaguchi has been training in martial arts for nearly three decades.

This fight is being marketed as the biggest title fight in Asian women’s MMA history. The claim very well could be true when Angela Lee hangs up her gloves at the end of an illustrious career, but only time will tell. Women’s MMA is not new in Asian MMA. Some of the first recorded fights happened in Japan in the 1990’s, followed by the creation of the first all-female MMA promotion, Smackgirl in 2001. There have been many great fighters who have fought and made their careers fighting in the highly competitive women’s MMA scene over the past 15 years.

One of the best fighters to come out of Asia, and arguably still the greatest female fighters of all time is none other than Megumi Fujii. “Mega Megu” began her historical career on an outstanding 22-fight win streak, including 19 finishes. Her only career setbacks came at the hands of controversial judge’s decisions and an eye-poke laden retirement fight after the age of 37. She truly was one of the greatest fighters to have competed in martial arts in Asia.

One part of ONE’s inaugural atomweight championship has a history with Fujii. Mei Yamaguchi, better known by her ring names “V.Hajime” and “V.V”, fought the legendary Fujii at Vale Tudo Japan 1st in 2012. Yamaguchi gave Fujii everything she could handle in one of the best fights of the year. Yamaguchi was able to land devastating strikes on the feet and the ground, but lost the close decision after being on the receiving end of Fujii’s ultra-impressive grappling offense. Fujii traveled with Yamaguchi to Singapore to support her former opponent for this championship opportunity.

In the co-main event, the inaugural ONE light heavyweight championship is on the line when the highly skilled grappler, Roger Gracie, takes on the undefeated Michal Pasternak. Gracie is hoping to build upon his ONE championship debut after parting ways with the UFC after one loss. Pasternak was victorious in his promotional debut, however he will be entering this fight after nearly 18 months outside of the cage.

Angela Lee burst onto the Asian MMA scene when she made her ONE Championship debut just short of one year ago. Since debuting as an 18-year-old, the Hawaiian native of Sinagporean descent racked up five submission wins in her five professional bouts. In the past six months, Lee has picked up three submission wins over Lena Tkhorevska, Rebecca Heintzman and Natalie Hills. With those wins, Lee has risen to the top of ONE Championship’s fighter stable, becoming one of the most popular fighters under contract.

Lee is a strong grappler with excellent scrambling ability. She is still young and learning, but Lee has showcased her vast knowledge of submissions with each and every win. Lee has been put in disadvantageous positions in her fights, but she has always found a way out of them. Her control from the top and positional awareness makes her dangerous from any position on the mat. Her greatest attribute may not even be just her grappling acumen, but her ability to score with strikes while continuously looking to improve position and finish the fight. She makes full use of the ONE championship rule set that allows knees, elbows and kicks to a ground opponent.

Mei Yamaguchi is a 33-year-old martial artist from Tokyo, Japan. Yamaguchi spent much of her childhood in the United States, where she picked up her first martial art, karate. Yamaguchi moved back to Japan with her family before picking up jiu-jitsu and beginning her MMA career in 2007. Yamaguchi won her first major tournament that same year, defeating three top fighters in just a few months time. Yamaguchi would lose her next two bouts to Emi Fujino and Yuki Tsuji, however she would avenge both losses in the years to come. Yamaguchi became only the second fighter to ever defeat Tsuji, picking up the Valkyrie featherweight championship in the process. Yamaguchi kept knocking off strong opponents, only dropping fights to UFC veteran Seo Hee Ham and former Invicta champion Katja Kankaanpaa.

Yamaguchi fell into a rough patch losing both of her fights inside the Pacific Xtreme Combat cage before returning to the top of her new division in Japan. Yamaguchi’s only setback would be against the current No. 1-ranked atomweight Ayaka Hamasaki at DEEP Dream Imact on New Year’s Eve 2014. Yamaguchi is currently riding a three-fight winning streak, including her most recent tournament winning performance when she defeated Mina Kurobe and Satomi Takano in one night to win the DEEP Jewels 48-kilogram title.

Yamaguchi is an impressive striker with a side-standing karate base. She throws a strong right hand in combination with her jab and left hook. The two-time Shootboxing S-Cup tournament runner-up has a strong arsenal of front and round kicks that she disguises well with her hand combinations. Yamaguchi is a highly skilled grappler with a good wrestling base. She has an ability to change levels on a dime, switching from her skilled striking to a quick double in a matter of seconds. She is an aggressive grappler with an alarming comfort on the mat. She too combines her grappling with strong punches and elbows from top position. Yamaguchi has never been finished in her career despite being put in submission danger in some of her past fights.

This may not be the best female title fight in Asian MMA history, but this fight has all the makings of an instant classic. Lee may find herself in trouble if she can’t get this fight to the ground. Yamaguchi carries herself with a certain level of swagger while on the feet. She moves her head and feet better than most in the weight division. She has had trouble when opponents have applied sustained pressure along with a strong clinch and wrestling game, but Yamaguchi has shown time and time again she can hold her own on the ground and in the wrestling exchanges. Lee won’t want to hang around on the feet for too long, but she has one huge advantage in this fight, her size. Lee’s last fight was at a 120-pound catchweight, while Yamaguchi has fought the last three years at 105 pounds. She will also carry a significant reach and height advantage into the cage, an advantage that could play on the feet and the ground.

Fujii was considered by many to be unstoppable, a word that has been given to Lee as a nickname. This is her chance to catapult her career into the discussion of most sought after fighters in the world. Even with all of the advantages leaning in Lee’s favor, Yamaguchi is primed for the upset. I’m going to continue my recent trend of upset picks, Yamaguchi drags Lee into a dirty and gritty fight, and pauses the hype, even if it’s for the briefest of moments.