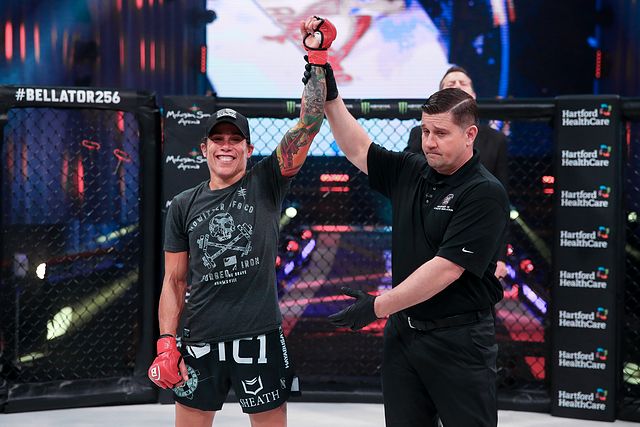 This was an exciting weekend for women’s MMA. We had Liz Carmouche make a huge statement with a destruction of the previously unbeaten Kana Watanabe. We had Julia Avila score a big finish of Julija Stoliarenko and then win over more fans with an emotional post-fight speech. We also had the PFL narrow its lightweight tournament down to the final four.

What can you say about a fight that lasts just 35 seconds? That’s how long it took for Carmouche to score the TKO.

In my preview, I pointed out that Watanabe tends to leave herself exposed and can be hit. Well, that is exactly what happened. Almost immediately, Carmouche tagged and rocked Watanabe, who is not someone that goes into survival mode. Instead, Watanabe made a quick attempt to return fire and then was backed up against the cage. Carmouche unloaded from there, and it was over almost before it started.

This was a really big win for Carmouche. It wasn’t just a win against a great fighter, but a dominant one. One of the knocks on Carmouche has been that her fights lack excitement and that she is more content to coast to a safe decision. It was even brought up in commentary before the fight. Whether that was in her mind or not, Carmouche came out ready to throw bombs.

This was a big loss for Watanabe. It’s not that she was exposed. Nothing was exposed, and she’s still someone who can contend for the Bellator title. However, in a fairly crowded division, she now moves down the line and needs to work her way up again.

After the fight, Watanabe put out a statement. She said, “I’m not good enough.” Now, we are relying on social-media platforms to translate her words for us, so who knows how accurate they are? However, I want to use this as a chance to mention something.

Yes, we get in a cage and fight, and we can be very emotional. There are emotions after a loss as well. Some hide it better than others. I try to mix in a little fun and humor to take my mind off it. When two fighters get in there, one will win and one will lose. You have a 50 percent chance of essentially failing. For some, fighting is how they make their living. Imagine going to work with the thought of having a 50 percent chance of failing at your job that day.

I’m lucky. I somehow have built a great support group on social media. When I take a loss, there is such a great outreach of support. I don’t get a lot of insults or jokes or “you suck” comments. Please understand, though, that when you walk out of that cage with a loss, no matter how much you try to hide it or how positive you act, you are still emotionally distraught and upset. Think of how hurtful it can be when you are already emotional and upset, then get an inbox full of insults and hate. It can really destroy someone.

What’s next for Carmouche? This performance makes it hard to deny her a title shot at the winner of the upcoming fight between Juliana Velasquez and Denise Kielholtz.

As with the previous fight, there is not a whole lot to say here. Harrison defeated Dandois via armbar in round one, and Dandois was doing the opposite of what I expected right from the start.

I thought Dandois would try to use punches to keep Harrison off her. Those punches, whether they were landing or not, might have kept Harrison from moving forward. Harrison will always move forward to get the clinch, and so the best way to stop someone from coming forward is to force them to take steps backward.

Right out of the gate, Dandois was the one moving backward and circling. She was not throwing any punches, though. This benefited Harrison. It allowed the former Olympian to come forward. With the lack of punches from Dandois, Harrison could move forward in carefree fashion. She was probably gaining confidence without having to do anything to gain it.

Dandois then went in for a desperation shot, but it was from far away and was thwarted before it could even have a chance of success. Dandois went to her back from there, and you knew it was all over. If Harrison gets on top of you, then you need a miracle to get her off of you. Dandois took the tactic of trying to control Harrison’s hands instead of possibly trying to pull her in close. This allowed Harrison to work on her posture while trying to free her hands. It was only a matter of time until Harrison got the armbar.

It’s a big loss for Dandois, but a loss that most people expected. She is skilled, and she didn’t do bad against Kaitlyn Young. I would really love to see her take extended time off to work on her striking. If she could bring that up to par, then she would be an incredibly dangerous fighter.

Meanwhile, it was business as usual for Harrison. She got a dominant win and did not get enough credit for it. She has fought some good competition, but her dominance makes it look as though it is easy competition. I do hope to see her get a fight eventually with someone that the general public considers elite, because I think she can and will do very well.

What’s next for Harrison? Well, that has already been decided: she meets Genah Fabian in the semifinals.

This fight almost went the distance, but Avila eventually submitted Stoliarenko via rear-naked choke in the third round. Yet, this contest is similar to the others in that there isn’t much to say.

Avila was out for blood right from the start. She did what she does, coming out throwing hard punches and kicks while looking for a finish. Stoliarenko seemed content to engage in that battle. I was very surprised that there was no real attempt to get the fight to the ground in round one. Avila’s punches, while not the most technical, were effectively wild. She throws hard, and she knows her target. She knows where she’s trying to land, and she gets it there despite the wildness. That makes it more difficult to prepare for her.

Stoliarenko does get credit here, though. She is tough. She was getting hit often and hard, but she didn’t go away. She didn’t look to shoot or clinch either, even though she probably should have done so.

By round two, I was sure Stoliarenko was going to look to get it down. I was wrong. She had a better frame, but it was still not a winning round. I began to wonder if, as good as her bout with Lisa Verzosa was, it in a way was a terrible thing for her. Perhaps she became overconfident in her striking and felt she could win fights there. She can win fights there, but not every fight. Stoliarenko will run into better strikers, and that is what happened here. She did start out strong in the second frame, but Avila once again edged her.

Stoliarenko was clearly battered and hurting headed into the final round, but she again showed her ridiculous toughness and kept plugging away despite getting picked apart for the most part. Avila demonstrated how confident she was by taking the fight down herself. This was risky, and Stoliarenko did for a moment appear to be getting into a better position. However, Avila got back into a better position and then got Stoliarenko’s back to sink in the choke for the tap.

What’s next for Avila? She bounced back beautifully from her loss to Sijara Eubanks and some personal turmoil to make a big statement. Perhaps she could fight Pannie Kianzad, who is also coming off a really good win.