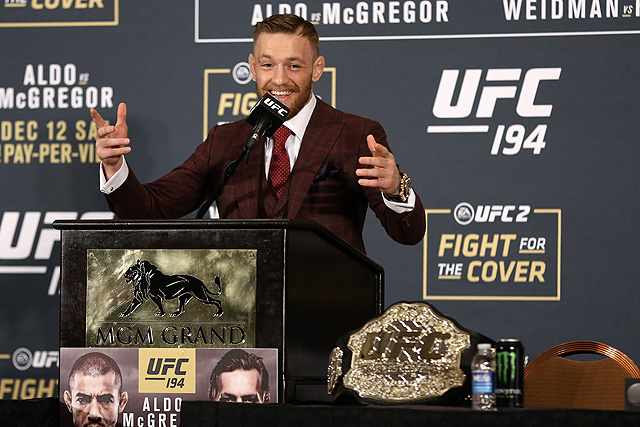 The UFC Needs a Plan Beyond Conor McGregor

All of these names at some point were synonymous with the UFC. They defined their respective weight classes in their own ways, from the devastating Gracie Jiu-Jitsu to the chilling knockout power of the “Iceman.” But times have changed. At this current moment, none of these fighters are at the top of the sport as they once were. Gracie currently competes in Bellator. Jones has dealt with legal troubles and supplemental woes (pun intended). Silva has only shown flashes of his prior superiority inside the cage, and Rousey hasn’t competed since her upset loss against Holly Holm. Brock Lesnar most recently failed his drug screen. So, who is the UFC looking at to be its new face for years to come?

McGregor’s accolades during his UFC tenure have been impressive. He had been able to stop all but one man (looking at you, Max Holloway) en route to dethroning the nearly unstoppable former reigning featherweight king José Aldo at UFC 194 in December. He is still the featherweight champion even though he suffered a loss.

Since defeating Aldo, McGregor has competed twice, both times as a welterweight. In all fairness to the Irishman, one of those bouts should have been against then lightweight champion Rafael dos Anjos, but an injury forced the Brazilian off the card and Nate Diaz came to save the day and sent the MMA world into a frenzy when he promptly defeated McGregor on less than two weeks’ notice.

At UFC 202, McGregor showed that he was able to rebound from this loss and gain revenge. He topped Diaz by decision. From that point, it seemed only logical that McGregor would finally return to featherweight and defend his title. Right? Right?! Wrong.

As the world is well aware, McGregor will be taking on current UFC lightweight champion and former Bellator lightweight champ Eddie Alvarez. This was not a well-received announcement, especially by Khabib Nurmagomedov, the man that many assumed would be getting the next shot at Alvarez. “The Eagle” was denied his shot at championship gold. Instead, he will be taking on Michael Johnson in a contest further down that same UFC 205 card.

What happens if McGregor is unsuccessful in becoming the UFC’s first-ever two-division champion?

The UFC needs to have a backup plan. The company has put all of its eggs into one basket. It has relied solely on McGregor, who has proven to be a momentous draw to both fairweather and diehard MMA fans. However, in the event McGregor loses, then there’s a very real possibility McGregor opts to retire.

Here’s a bold prediction: McGregor will never defend any belt he holds, whether he is able to dethrone the newly minted Alvarez or not.

McGregor has made enough money to be well off for quite some time. It would not come as a surprise if he started up his own MMA organization and took the presidential seat upon it. Or he could simply ride off into the sunset and enjoy his riches.

What is the solution for the UFC?

The organization needs to do what Bellator has done. OK, lower the pitchforks and torches for a minute.

Bellator has done an amazing job over the years of building up multiple fighters within its organization. These fighters have become the multiple faces of Bellator. Michael Chandler. Daniel Straus. Liam McGeary. Even the aforementioned Alvarez. All of these fighters were basically homegrown Bellator talent that have each gone on to become respectable and recognizable champions within the organization.

The UFC should focus less on building up one fighter and focus more on the organization as a whole. The company needs to focus on the fighters who have the ability to become the new faces of the promotion. The UFC cannot just rely on a sole entity.

If the UFC doesn’t shift its approach, it could find itself without any money-makers.