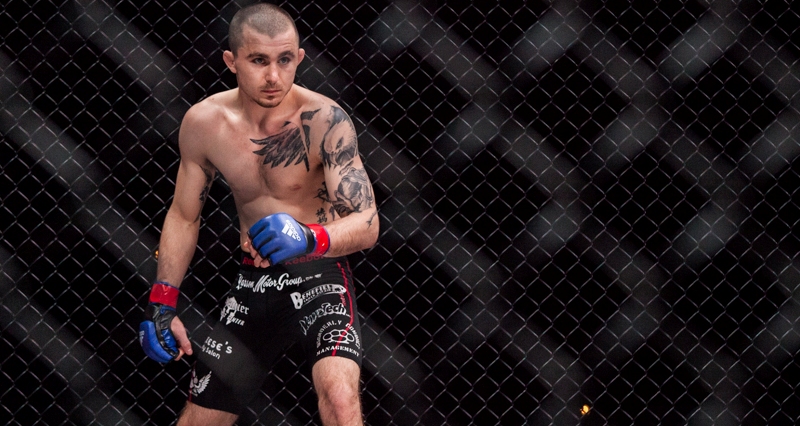 One of the most valuable and influential self-help books of the 20th Century was the late Stephen Covey’s “The 7 Habits of Highly Effective People.” This instant classic lays out the basic groundwork for someone to get their life and work on track so that they can make the most out of the short time they have. The first six habits are all about getting one’s business in order and keeping it that way. However, it’s that seventh habit, something the Japanese refer to as kaizen, that takes one’s life from good to great.

Covey referred to his seventh habit of continual improvement as “Sharpening the Saw.” Just like an overused saw, when someone gets stuck in a rut of doing the same things over and over again, the tool gets dull. It is that process of shaking things up, trying different methods, and constantly working to get better that takes someone to the next echelon of achievement. The same can be said for pro fighters.

UFC featherweight Darrick Minner has firsthand experience with this. The 30-year-old, who has a whopping 36 pro fights under his belt, has always trained at the same camp with the same guys for almost a decade. He loves his fighting family in his native Nebraska, but he was stuck in a rut where he would win a local show and then lose in a bigger regional show. He tried training at Xtreme Couture in Las Vegas, but the cycle kept going from early 2017 to late 2019. This is when he finally got the call to the UFC.

After the loss, Minner decided to switch things up again. He became a training partner of Dawson’s under the tutelage of UFC veteran James Krause at Glory MMA & Fitness in Lee’s Summit, Mo. In September, Minner returned to action and picked up his first UFC win over T.J. Laramie with a submission in just 52 seconds of the first round.

“It was a long time coming,” Minner told Combat Press. “All of the grind and my coming up for the last 10 years wasn’t for nothing, you know? I finally hit one of my goals. That’s the biggest thing. My goal was not to just get to the UFC, but to get to the UFC, win fights, and stay there for a long time — to make a really good living and set myself up for the future.

“For one, I was in better shape. For two, I just felt different in that fight. With Dawson, I was out of shape. The first round was good, but I don’t know if it was jitters. I wasn’t training too hard for that fight, because it was seven days’ notice, so I knew I had to go 100 percent in that first three minutes. Once T.J. came around, I had a coach that was game-planning for me.”

Minner had just had his second daughter last spring, so the trip from Omaha to Kansas City was much easier on his family than the trek from Omaha to Las Vegas.

Now, Minner is set to enter the Octagon on Saturday night as part of the main card of UFC Fight Night 185: Blaydes vs. Lewis.

“This is my first time having a real fight camp,” said Minner. “It’s been great. I’ve been in Kansas City for pretty much seven weeks, man. I just come home on the weekends. I drive down Monday morning at 6 a.m. and drive back either Friday afternoon or Saturday morning after practice.

“You just got to go where the training partners and the coaches are at. James Krause is one of the best in the business, if not the best right now. The training partners down there just elevate me that much more. It’s just a different atmosphere, and I can’t slack. I have to be on my P’s and Q’s every day. A lot of times, I’m getting put in bad positions a lot more than I would at Premier [Combat Center]. There’s 14 dudes in the UFC in that gym, you know? That was the best position I could be in.”

Krause has put together a fantastic coaching staff and a stable of serious up-and-comers at his gym. Minner, who is only a two and a half hour drive away, fits right into the mix. For a guy who has more short-notice fights than most pro fighters will ever have total bouts in their entire career, his saw will be as sharp as ever when he enters the cage to face UFC veteran Charles Rosa.

Rosa last fought in June when he barely squeaked by with a split decision over Kevin Aguilar. Rosa had dropped a decision to Bryce Mitchell only a month prior. He is 4-4 in the UFC over the last six and a half years, but he seems to think he will beat Minner handily. Minner, of course, has a different perspective.

“Rosa has this little bit of a name. Why? I don’t know. I’m going to make a statement on Saturday night at his expense.”

Minner’s style has traditionally been to go in and work to get a quick finish. It’s an exciting style and the main reason why most of his fights have ended in the first round. Only a handful of his outings have made it to the second frame, and only three have gone the distance. However, his hard-charging style has also gotten him both gassed and in trouble. This led to changes in his training.

“If I go in and fight my fight, I can beat him,” Minner said. “As long as I don’t rush into him and do something stupid, I think it will be a clean sweep. I’m still not yet to my potential, and I’ve been fighting a long time. I have fought much tougher competition outside of the UFC than Rosa has fought inside the UFC. This is my breakthrough fight.”