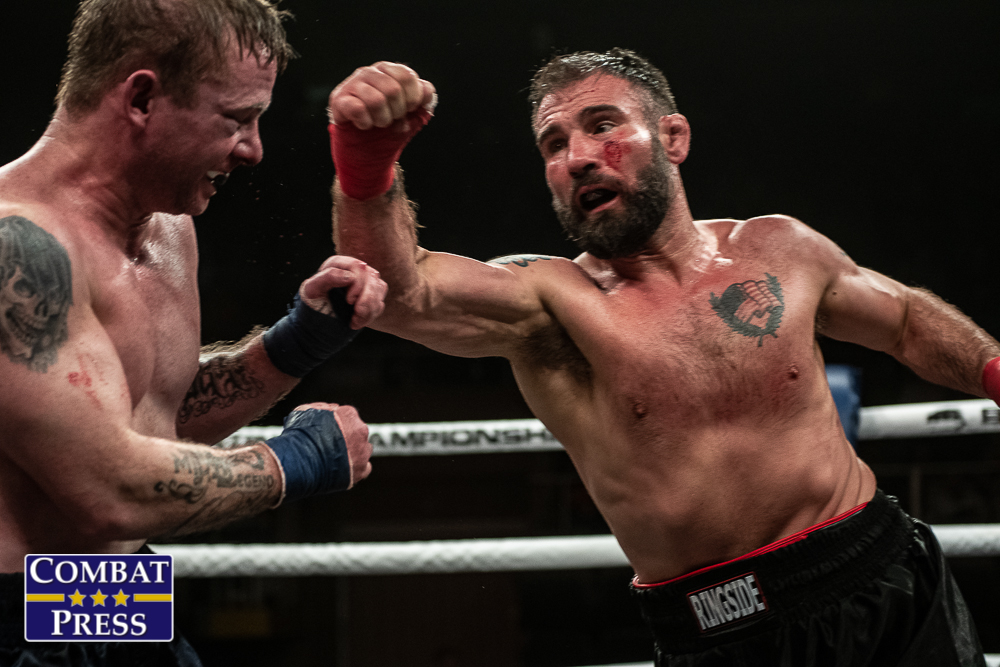 BKFC 11’s Isaac Vallie-Flagg: Never Too Late for a Title

What do you do when you’re a 40-year-old effectively retired former MMA athlete with a 24-fight career that spanned 13 years? Well, if you’re Isaac Vallie-Flagg, you start punching bowling balls with your bare hands, as Ken Shamrock once put it.

Vallie-Flagg made his pro MMA debut all the way back in 2003 and last entered the cage in 2016. He fought most of his career at welterweight before dropping down to lightweight for his 2012 Strikeforce bout against Gesias “JZ” Cavalcante. When Strikeforce merged into the UFC in 2013, Vallie-Flagg was part of the package. He had his final MMA bout in Albuquerque, N.M., where he lived and trained his entire career. He was able to submit Jonathan Gary by submission. After that, he just continued his other career as a home remodeler.

In 2018, there was a phenomenon in the world of combat sports as old-school, bare-knuckle boxing started experiencing new life. The first Bare Knuckle Fighting Championship event took place in June of that year, and within four months, the promotion had put on three shows. Athletes were lining up for fights, and Vallie-Flagg was among them. He made his bare-knuckle debut at World Bare Knuckle Fighting Federation’s first and only show in November 2018. He knocked out Cory Simpson early in round two.

“I have a real job,” Vallie-Flagg told Combat Press. “I just enjoy fighting. I wouldn’t be doing it if I still didn’t enjoy it. It’s something I’m still driven to do, and I found my passion with bare-knuckle stuff, and I just want to see how far I can take it.

“I think it was kind of a cool new — but old — thing that was coming out. I wasn’t sure how well my back could handle MMA after a surgery, and I tore my psoas muscle also. So, the stand-up part of it — the boxing part of it — was always something I enjoyed. Between being something I enjoy and the injuries preventing me from doing MMA, I thought this was a great avenue.”

As can be expected with this type of new promotion, there were shady “businessmen” trying to get in on the action. The WBKFF show smelled bad to some people from the beginning. Those people were right in their hunch. The card was absolutely stacked with MMA veterans, including Chris Leben, Johny Hendricks and Phil Baroni. However, after a night full of knockouts, none of the fighters were paid, and several businesses in the area got stiffed as well. CEO Tom Stankiewicz is now serving time in federal prison as a result.

While the WBKFF left a bad taste in everyone’s mouth, many fighters, Vallie-Flagg included, found a new love in bare-knuckle boxing. In early 2019, Vallie-Flagg was approached by BKFC. He made his promotional debut that April, when he scored a TKO victory over Randy Hedderick in the third round. In August, he followed the win up with another TKO victory, this time over UFC vet Melvin Guillard. Both wins were due to hand injuries sustained by his opponents.

“It’s a completely different deal than MMA, because of the fact that you are just punching and it’s bare-knuckle,” Vallie-Flagg explained. “It’s super brutal, and some guys go in there and try to throw as much as they can, and they end up hurting themselves. I think the better approach, and what I’ve been trying to focus on, is being a little more picky with my punches and finding the home, instead of just trying to go in there and throwin’ down.

“It’s forced me to work on some different things, like footwork and head movement. I train a little bit differently. I used to like to throw overhands a lot with my right hand, and I try not to anymore, because throwing overhands with the right hand means you might catch the top of the head. So, I try to avoid that kind of stuff. I try to use more technical boxing when I’m not in the clinch.”

Vallie-Flagg was a mainstay at the famed Jackson-Winkeljohn camp throughout his MMA career. He had five wins by knockout and was never knocked out. He is a purple belt in jiu-jitsu and had five submission victories with one disqualification and 10 fights going the distance. Now, with wrestling, kicking and submission grappling out of the picture, he has had to change things up.

“I found a boxing coach a few years ago, and I started working with him,” Vallie-Flagg said “He’s a guy who used to be out of Johnny Tapia’s camp, when Tapia was still alive. His name is Ruben Griego. He’s had to step away a bit for this camp, due to the risk of COVID, so I’ve been going to a guy named Steve Garcia, down in the South Valley. But, Ruben’s been with me since I started doing this, and he’s still been trying to come help me out.”

The next battle for Vallie-Flagg takes place on Friday night, when he headlines BKFC 11 in Oxford, Miss. His opponent will be fellow longtime MMA veteran Luis Palomino, who turns 40 later this year. The two men will fight for the inaugural BKFC lightweight title. Palomino also used to train out of Jackson-Winkeljohn.

“Other than that, he’s another guy who’s been fighting a long time, and he’s fought some really tough dudes, so it’s going to be a really good fight and a technical fight too.”

Palomino has had title shots in the past, most notably against current UFC interim lightweight champ Justin Gaethje when they fought for the World Series of Fighting lightweight strap. Meanwhile, this will be Vallie-Flagg’s first title bout. At 42 years old, he still feels great, though. He is on a three-fight bare-knuckle winning streak and is ready to bring the heat.

“It’s going to be an exciting fight,” Vallie-Flagg said. “Both of us come in to throw down — me and Luis. You are going to witness me getting the title, and I’m going to keep it for quite a while.”

Anyone who knows a true fighter knows that there’s a fire burning inside of them that just can’t be put out. Vallie-Flagg has this fire. On Friday night, he will come with everything he has in an effort to earn the belt and a chance to sit on top of the throne for the first time in his fighting career.

Fans can watch BKFC 11 free and live on the bareknuckle.tv app, YouTube or Facebook Live. The main card starts at 9 p.m. ET on July 24.