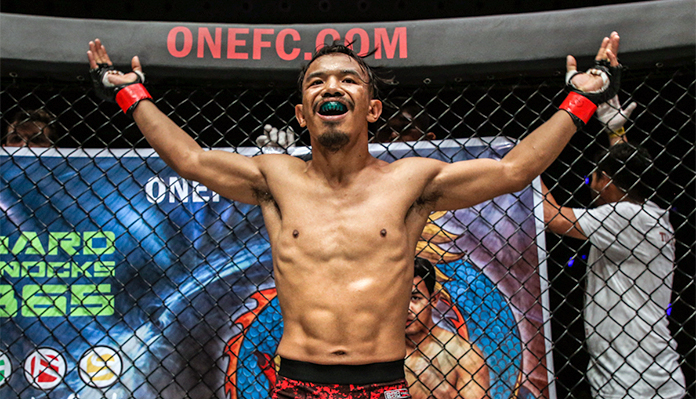 ONE Championship’s Tial Thang: The Cycle of Life

Much like life, gardens are cyclical. Cultivating fruits and vegetables begins with conditioning the soil, planting the seeds, nurturing the plants to maturity, harvesting, consuming, and starting over again. It’s an expedited version of life that can take place in a small period of time.

Up-and-coming professional mixed martial artist Tial “The Dragon Leg” Thang has seen the cycle of life happen on both the level of the human experience, as well as in the backyard garden. He was born in Burma, before his family emigrated to Malaysia when he was 11 years old. He is the second oldest of four children with one older sister and two younger ones. Eventually, his family left Malaysia for the United States, where they ultimately landed in Upstate New York.

“Growing up, we moved a lot,” Thang told Combat Press. “We moved city to city to city – continent to continent. So, growing up, you know, I can’t complain much. I love making new friends. I love meeting new people. So, it was okay.”

Thang wrestled when he was younger, and wrestling, like many fighters, ultimately became his foray into the fight game.

“I started training MMA in New York at Clinton Street Kickboxing,” Thang said. “I was just doing it to have some fun, lose some weight, and just to fight. I always loved fighting. Growing up, I always watched fights. So, after wrestling [practice one day], I was playing soccer at the park, and wearing a wrestling shirt, and a guy said, ‘Do you wrestle? I do MMA, so why don’t you stop by?’ That’s how I started training, and after about three weeks, I had my first amateur fight. I fell in love with it, but back then, I didn’t know what direction to go.”

Thang initially had a bit of a rough start to his amateur career. After dropping three of his first four fights, though, he eventually was able to string a couple wins together. It was as an amateur that he eventually connected with a fellow Burmese fighting legend, who also happened to be training on the East Coast.

“Fighting is what made my life straight,” said Thang. “Before I was fighting, I didn’t really have a purpose in life, you know? I was just doing what regular people were doing. I was working eight hours a day. And then, after eight hours, I was drinking. I was not happy with me with my life, so I looked for something to do as a career. I wrestled when I was little, and I always liked to fight, but I didn’t know where to start. One day, I saw my brother Aung La [Nsang] fighting on YouTube. I saw him beating people, and I was like, ‘man, I can do that too.’ That’s when I contacted him, and, pretty much ever since then, he’s been helping me.”

By the time Thang caught Nsang online, the latter had already had a long career in MMA, making his way through the Midwest and East Coast regional circuits. At the time, he was training out of Crazy 88 MMA in Maryland. This is when the two men made their connection.

“After I contacted Aung, I moved my family to Maryland, and things didn’t work out,” Thang explained. “He moved down here to Sanford MMA [in Deerfield Beach, Fla.]. At the time, I was an amateur, and I was kind of struggling, but he was like, ‘if you come down here, your life will be different.’ He was right. The first day I got there, I saw the level of MMA, and the high level of the trainers. I said, ‘this is where I need to be.’ Ever since then, I’ve stayed here and haven’t gone anywhere else. It’s an honor for me that Sanford MMA has accepted me as family. I have fought for them from amateur through right now. I love it.”

A little over two years ago, Thang moved down to South Florida with his wife and two young sons. At the time, Nsang was the reigning ONE Championship light heavyweight and middleweight champ, and he had been fighting for the promotion since 2014. So, shortly after Thang arrived in Florida, he, too, was signed by ONE.

Thang made his professional debut at ONE Championship: Reign of Valor in Mar. 2019. This was an amazing turn of events, as the event was held in his native country, a place he had never actually fought in before. It was another example of the cycle of life, as he was back to his birthplace for his first pro fight. Thang won that bout, as well as his next two, one of which was in Malaysia, his second childhood home. Then, last August, at ONE Championship: Battleground III, he suffered his first pro defeat at the hands of Min Jong Song by unanimous decision. While it was not his desired outcome, the experience did bring some benefits.

Tomorrow night, live and free on the ONE Facebook page, Thang will be back in action, kicking off the lead card of ONE Championship: Bad Blood. His opponent will be Indonesia’s Sunoto Peringkat.

At 35 years old, Peringkat is seven years the elder of Thang, and he has almost five times as many pro fights. He has been fighting for ONE for seven years, and his promotional record is 10-7. However, he is 3-4 in his last seven fights, and hasn’t been in the cage for two years. Thang is confident and welcomes the challenge.

“He’s a legend in ONE Championship at bantamweight,” said the Burmese fighter. “He’s probably fought the most, I think, in bantamweight. And, he is a sambo [guy]. He loves grappling, and he always comes to fight. He has more experience than me, and he’s the type of guy you have to beat to be considered legitimate in the weight class, so I cannot wait.”

Thang has big aspirations for his career, and his best years are obviously still ahead. However, like most fighters, every fight is one step closer to the top of the heap.

“The reason I got in this sport is to get the title,” Thang said. “I don’t care how many how fights it’s going to take me. I’m going to take them one-by-one, and, someday, that belt will be mine.”

So far, while all of Thang’s amateur fights were in the U.S., all of his pro fights have been in Southeast Asia, where he was born. That is an experience that many fighters cannot relate to.

“It is really cool to think about,” Thang intimated. “Because, you’re from there, and you’re going back there to fight in front of the people you love. I love it, but the only thing is that it’s a 30-hour flight, and it’s COVID-pandemic time. I wish we had more time over there, but I can’t complain, because I’m still doing what I love to do. I take everything in a positive way and stay focused, you know? So, I can’t really complain. I take all of these opportunities with honor.”

The Fort Lauderdale area, where Thang currently resides, is a lot closer to the latitude of his native Burma than Upstate New York is. It’s almost the same latitude on the map, versus New York, which is almost 20 degrees of latitude to the north. So, it’s no wonder that, once he and his family got settled in, he took on an activity that brings him back to his homeland – even if it is subconsciously.

“Right now, in my free time, I garden,” explained Thang. “I started doing a garden, a vegetable garden, since we moved down to South Florida. And, I love it, you know? I think that will be my new hobby – planting things, planting vegetables, planting trees, stuff like that. It’s a different feeling, you know? You start from the seed, and then you see the whole fruit. Eggplant is really good. I like tomatoes, lettuce. Man, I have a lot of veggies in my in my backyard.

“I’m not into fruit yet. I’m more into small stuff right now – more vegetables. I have mango and pineapple, but I haven’t really focused on those yet. I’m focused on small stuff – cauliflower, cabbage, celery, cilantro, spinach – stuff like that – where you can eat it immediately, you know?”

The cycle of life is truly amazing. And, for someone like Thang, it can be explained on both the macro and micro levels. Whether seeing his career evolve over several years – bringing him back to fight in Southeast Asia – or eating a vegetable that he just planted months before, he lives a very cyclical existence, and he will be back in the cage tomorrow night to do what he loves to do once again.

“People should tune in and watch this fight, because I’m coming really hard,” said Thang. “I’ve been training really hard for this fight, and I’ve been cleaning up my technique. They will see a different version of me. It’s going to be a very exciting fight.”