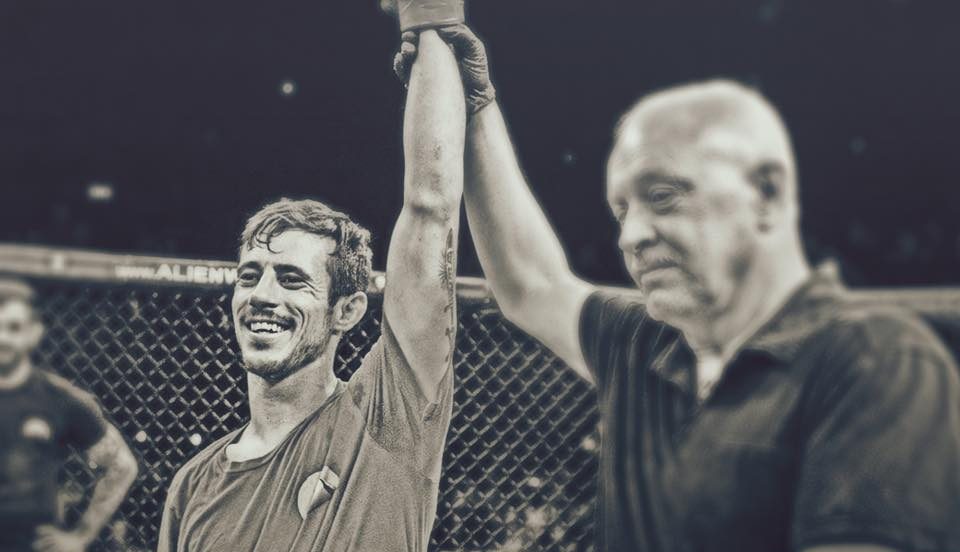 Remember when the UFC came out with those “Fighting’s in My DNA” t-shirts a few years back? Yeah, that was cool. It’s sort of reminiscent of the scene in Pulp Fiction when Samuel Jackson’s character Jules explains his oft-recited Bible verse. While there is an argument for fighting to be part of human DNA, not all fighters were born to fight.

Swiss-born martial artist Kevin Wirth may not have been born into a fighting family, per se, but he was definitely born into an athletic family. The oldest of three children, Wirth was driven to excel in sports for his entire life.

“My parents were both athletes,” Wirth told Combat Press. “My dad was a gymnast and ski acrobat. My mom was a professional high diver. So, eating healthy, doing backflips off the couch, having trampolines, and doing all kinds of athletic stuff was always encouraged. And then, in first grade, I showed an interest in fighting, so they signed me up for wrestling and put me in kung fu. So, I’ve just had a long history of doing it. I was training casually for about 10 years, but taking it seriously for about 15 years.”

Wirth’s family moved to Colorado when he was very young. As he got older, his interest in martial arts grew. He was a big fan of Bruce Lee, Jet Li, and any other high-level martial artist. When he was 18, the UFC was really starting to take off, and he started trying at Muay Thai and jiu-jitsu gyms.

Wirth, who was training out of Durango Martial Arts Academy in Durango, Colo., at the time, earned many accolades. He obtained the rank of purple belt in Brazilian Jiu-Jitsu, made his amateur MMA debut, and eventually went pro in 2016, racking up four wins with King of the Cage. He now sits at 8-1 with wins in Cage Fury Fighting Championships, KOTC, and the Legacy Fighting Alliance. He attributes most of his success to the way he trains as a lifelong martial artist.

“It’s a lot of time on the mats, being an athletic person in general, and concentrating on the right things, like advanced basics, a lot of footwork, and making sure I’m fast and strong,” Wirth explained. “I think a lot of people go off track with a bunch of fancy stuff, or they get a little one-dimensional, or they’re not constantly going back covering the basics.”

In 2018, Wirth decided he needed to broaden his training horizons. He made a trip out to San Diego. It was there that he eventually landed at The Arena, where MMA veterans Baret Yoshida and Chris Leben serve as just two big names in a large stable of talented coaches.

“Durango Martial Arts was a really good school, especially for jiu-jitsu, but it was the only place to train for miles around,” Wirth said. “So, I had the same few sparring partners for years, and you tend to figure each other out, so the sparring goes the same way every time. It was hard to know whether I was good or if I was good just for a small town. Moving out to San Diego gave me the opportunity to spar with all kinds of dudes. The fight community out there is really strong. There are always different sparring partners, and a lot of people have been in the UFC, so it makes it much more realistic.”

Wirth is currently on a three-fight winning streak, with his last fight taking place at LFA 74 in August 2019. That night, he fought Ryan Lilley in a bantamweight contest that served as the co-main event. It was his fifth decision victory in eight wins. His only loss, also under the LFA banner, was a split decision. Wirth has never been stopped, either.

“My biggest thing that I’ve been proving over and over again — to myself mostly — is that I can be slick and I can move through fights and I can win, and I can come out the other end without getting hurt,” Wirth said. “But, to make it to the next level, I need to prove that I can be dominant and put dudes away. I need to steal the center of the Octagon.”

After his last fight, Wirth spent the autumn months of 2019 traveling Asia and trying to experience the roots of a lot of the martial arts he had been practicing his whole life. It was an eye-opening experience that included stops in Japan, South Korea and Thailand. He visited Korean Zombie MMA, Master Toddy’s Muay Thai, and the famed Tiger Muay Thai & MMA gym.

“It was great, especially South Korea and Thailand,” Wirth recounted. “Japan was really cool too, but I should have done a little bit more research before I went out there. It turns out that, unlike the [United] States or the other two places, most gyms won’t just take people swinging by. You have to be willing to be somebody’s student for a while. They don’t just do day passes or anything, so I didn’t do much training there.”

Wirth, who works as a personal trainer and as a striking coach at The Boxing Club, returned to the United States in November and resumed his training in San Diego. Right around the time he aimed to get back into the cage, the coronavirus (COVID-19) pandemic hit. He knew he wasn’t going to be fighting for at least a few months.

In September, though, the LFA announced it was beginning phase three of its reopening process. The first of three events was announced for Friday night, October 2, when LFA 92 lands in Park City, Kan. Wirth, like many, was told to be ready for the trio of events about four weeks out. He will now serve as the headliner at LFA 92 opposite Askar Askar.

Askar, who hails from Palestine and trains in Chicago, is 10-1 as a pro. Most of his pro and amateur wins have come by some form of knockout, but in his last outing in February, he was knocked out in 39 seconds.

“He’s good,” said Wirth. “He comes forward a lot. He’s aggressive, and this can be hard to deal with, but he’s overaggressive, I think. He has a decent jab, and he gets into wild exchanges, but when he does, he doesn’t really pick his shots or move his feet. He’s good, but nothing crazy. I think I have a more complete game.”

A win over Askar would put Wirth at 3-1 with the LFA, which means he could be knocking on the door of the UFC. Lately, a couple wins in the LFA almost guarantees, at the very least, a spot on the waiting list for a short-notice fight. With Wirth’s lifestyle and upbringing, he is definitely always ready. If there is any group of people that always has his back, it’s his brother and sister, both of whom are Brazilian Jiu-Jitsu players as well.

Some fighters loosely throw around the whole idea of fighting being in their DNA. For Wirth, it’s the real deal. He has been doing this for most of his life. Tomorrow night, the 33-year-old bantamweight will finally get to show his skills as the headliner in the LFA’s Octagon in a fight that airs live on UFC Fight Pass.