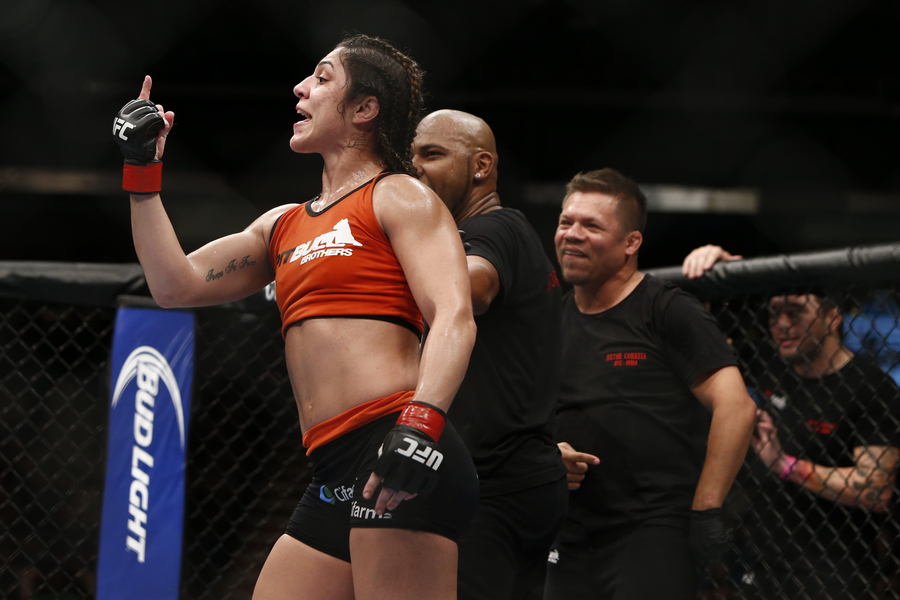 “Bethe Correia versus the Four Horsewomen!”

Okay, so it doesn’t quite have the same appeal that stemmed from UFC 19 when Tito Ortiz flipped off the corner of the Lion’s Den, but it is one of the most intriguing storylines developing in the UFC today.

Immediately following Correia’s TKO win over Shayna Baszler at UFC 177, Correia took a page out of the Ronda Rousey playbook and put herself in the sights of the champion with some mild post-fight comments that tugged at Rousey in such a way that the women’s bantamweight champion immediately texted UFC President Dana White and asked to fight Correia before “someone else beats her.”

There is the backstory of the Four Horsewomen—Baszler, Rousey, Jessamyn Duke and Marina Shafir—provoking Correia in recent months on Twitter after her win over Duke and her own subsequent taunting of Rousey and company, but that’s something Correia is welcoming. She has seen the way Rousey climbed the popularity charts, and it was by her unwavering confidence, trash talk and, most importantly, success inside the Octagon. Now, the Brazilian is looking to follow the blueprint.

The UFC can no doubt sense a collision course between Correia and Rousey, but this train isn’t ready to arrive just yet. The champ has a formidable fight on the horizon against Cat Zingano, who is undefeated through eight professional outings, but Zingano has to take care of business against Amanda Nunes later this month at UFC 178.

As much as most would believe Zingano deserves the next opportunity to dethrone Rousey, Dana White likes to ride waves of momentum, something Zingano certainly doesn’t have at this point. This is one of the reasons why White is trying to sign Gina Carano. He wants to make sure Rousey has a buzzworthy opponent lined up. There aren’t many people, myself included, who believe Carano would pose much of a threat to Rousey or any of the top-ranked women in bantamweight division. However, Carano, if signed, may get inserted ahead of everyone in line and fight Rousey to avoid the risk of Rousey taking a loss in her return.

The decision behind who fights Rousey doesn’t appear to have anything to do with who’s most deserving. Instead, it’s about what drives pay-per-view revenues in a positive direction. The UFC would be doing itself, and the fans, a disservice if it completely blew off Correia and the rivalry she has helped foster between herself and the Rousey crew. Sure, Correia is only 3-0 in the UFC and 9-0 overall—and she’s ranked 12th in the Combat Press rankings, but she’s the only one in the division coaxing genuine angst from Rousey.

The UFC should have the game plan in mind to have Correia fight again within the next two months and hold off on announcing Rousey’s next opponent. Should Correia win, that would position her for a fight with Rousey in early 2015, potentially in time to be a co-main event with Anderson Silva and Nick Diaz at UFC 183 on Jan. 31. If that’s too soon of a turnaround for Correia, then having her and Rousey go at it in February would also be a great start to the new year for the UFC. We’ve all become accustomed to the fluidity of fight cards, and it’s hard to project what’s actually going to happen a few months down the road, but Correia versus Rousey has the potential to have a great build-up.

In addition to inserting Correia into the limelight, this serves as another benefit to the UFC in that it would give Carano (if signed as expected) a chance to get a fight or two in against the lower tier of the division. Holly Holm, another highly marketable challenger for Rousey, would continue to heal and recover from her broken hand. Zingano can continue to state her case for being the best in the division. All the while, Correia and Rousey would be trading verbal jabs. Combine all this with the projected success of the upcoming season of The Ultimate Fighter and the women in the UFC are poised for a huge 2015.

Is Correia the most deserving challenger for Rousey at this point? No, most certainly not. Does Correia represent the one fighter who is on top of Rousey’s hit list? As of now, that is a resounding yes. Rousey can sell a fight regardless of who she is going against, and we’ve all seen what she can do when she absolutely hates someone (Miesha Tate). Correia is on the path to rival the level of hate from Rousey that Tate received.

Rousey has seen a dip in the number of pay-per-view buys over her last few fights, and that can be attributed to her not having any real “beef” with her opponents. Rousey needs legitimate rivals in the Octagon with her in order to sustain her tough-girl image, otherwise she’s just facing fighters with no real backstory and nothing that grabs the attention of the casual fan beyond Rousey’s dominance, which is reaching the intrigue levels of a prime Mike Tyson of the 80s. Those casual fans are a big part of the pay-per-view numbers, and the more Rousey dislikes her opponent, the more the fight builds and the more willing those fans become to part with their hard-earned dollars to watch Rousey fight.

Dana White recognizes what’s transpiring between these two camps, and it’d be surprising to see the promotion fail to squeeze every penny it can out of Correia’s surge in popularity.