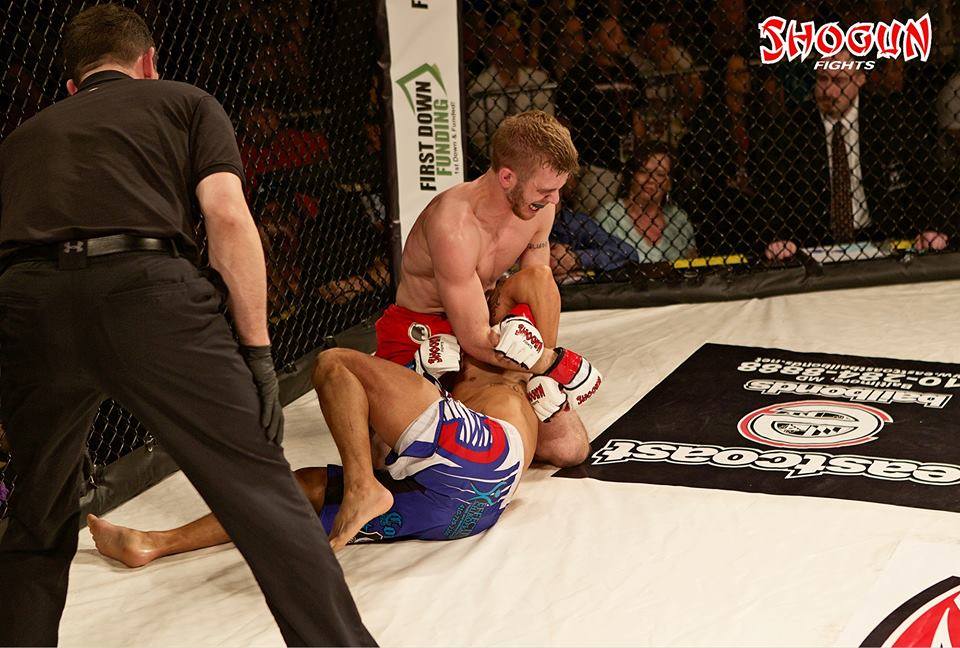 When you ask most fighters to describe themselves, you generally get the usual platitudes. Warrior. Savage. Beast. Soldier.

However, if you ask Shogun Fights bantamweight champion Jesse Stirn to describe himself and his career, you will likely hear a one-of-a-kind answer: “A science experiment that unfortunately was successful.”

“I’ve treated my career like a science experiment,” Stirn, a seven-fight veteran with a record of 6-1, told Combat Press. “I look and study every aspect of it.”

Stirn didn’t participate in martial arts or any other kind of athletic endeavor growing up. When he began watching the UFC in 2010, he decided he wanted to pursue MMA. Stirn began training full-time in 2011.

“I’ve always had an interest in martial arts, and I wanted to learn how to defend myself,” Stirn said. “I also liked the fact that when you train a lot, that means you get to eat a lot too.”

Stirn went undefeated as an amateur before turning pro in 2015. He began his pro career with a knockout victory at Shogun Fights 12, but he hasn’t tasted another knockout finish since then. It actually doesn’t bother Stirn all that much, though.

“People always look for the headhunter or the highlight knockout, but I have a darker plan in mind,” he said. “I want to make him quit. I want to look at him on his stool and see him wanting to quit, while I still want to keep going. If the knockout happens, it happens, but it’s not what I’m interested in.”

Stirn has maintained his success while transitioning from the amateur level to the pro ranks by focusing on the fundamentals, including the most basic element of a fighter’s repertoire: footwork.

“You can’t punch or knee someone without proper footwork,” Stirn said. “It’s also important to practice safety in training. Most guys get hurt or experience trauma during training. I don’t spar hard anymore, and I take care of my body.”

Stirn won the Shogun Fights bantamweight title at the promotion’s last fight card in April. He eked out a close split decision over Mike Easton, who previously fought in the UFC and counts former UFC bantamweight champion T.J. Dillashaw as one of his opponents.

“I got the call for the fight about a month before and I told them I had to think about it a little bit, and I actually had the jitters a little bit,” Stirn said. “But I decided to take the bull by the horns and I trained very hard. I tend to play up to my competition, and he was a very good opponent who brought out the best in me. It was a really close fight — it was neck-and-neck.”

It was also a fight that had Stirn and Easton engaging in conversation while sharing the cage together. While trash talk from fighters like the Diaz brothers or Conor McGregor is commonplace during a fight, the banter Stirn and Easton exchanged was decidedly less hostile.

“When he attacked, I defended,” Stirn said. “We were complimentary to each other, and I called him a tank. Fighting is like a permanent kind of conversation; it’s our own language. The online beefs that you see with fighters really aren’t real.”

Stirn will make his first title defense at Shogun Fights 17 on Saturday, Oct. 7, in Baltimore, against Tim Goodwin, whose record sits at 10-7. Although Stirn acknowledges that Goodwin is a tough, former NCAA Division I wrestler, he admits to being more concerned going into his fight against Easton, who is a black belt in Brazilian Jiu-Jitsu.

“Wrestling is more about just control,” Stirn said. “You just gather as much information as you can, then try to implement a strategy.”

Stirn is looking to grow his career by hopefully exploring opportunities to fight internationally. While he admitted to building a career in fighting, he still wonders what life is like on the other side.

“I’ll have to make a decision about getting a normal job, and not having to worry about bills,” Stirn said. “I never had any set goals with fighting, but I’ve built such a career that I feel I’m ready to launch to the big time. My coaches say I’ve worked too hard, so I’ll roll with it until I have an injury or I get tired. I’m just going to do my job, do it intelligently and do it well.

“Training is easier than the actual fight. There are no mentors out there to tell you how to do things. It’s really the Wild West out here. But it’s all about balance for me. I get more benefits from knowing when to rest, when to eat or when to take a day off. I’m working smarter, not harder. It’s also about managing your emotions, which is hard because fighting takes a toll on your relationships — and I’m tired of it affecting others.”