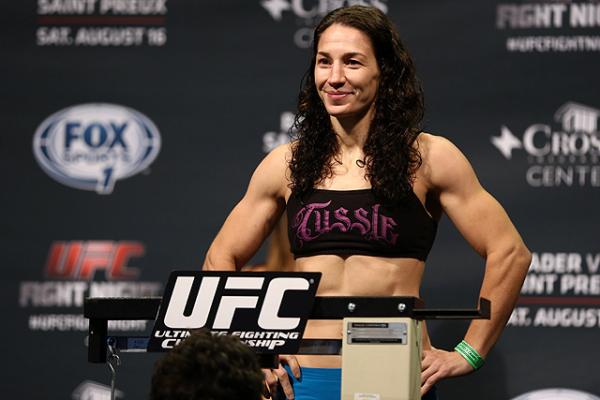 With the growing popularity of women’s MMA, it is important to recognize these women with a rankings system similar to the men. Between the UFC’s inclusion of a bantamweight division, its recent addition of a strawweight division and the all-female promotion of Invicta FC, more and more women are being exposed to casual and hardcore fans alike. Every month, Combat Press compiles the staff’s individual rankings from featherweight to atomweight to create the Combat Press Women’s MMA Rankings. Here are the inaugural rankings for the month of September.

The featherweight division had some big shakeups in the month of August. The biggest may be the disappearance of Faith van Duin, who was knocked out by Arlene Blencowe. It completely shot van Duin down the rankings, allowing other ladies to take her place in the top 15. Pannie Kianzad continued her dominance and march to the top when she dismantled Megan van Houtum to keep her perfect record intact. Latoya Walker also continued her meteoric rise up the featherweight ranks with an impressive win over Brittney Elkin. The victory earned her a contract with Invicta FC. In September, one member of the featherweight top 15 is heading out of the division. Charmaine Tweet will move to 155 pounds when she meets Veronica Rothenhausler at Invicta FC 8. Beyond that, it doesn’t look like there will be much activity for the division.

The bantamweight division had some interesting bouts take place in the month of August. Sara McMann kept her top-three ranking with a close decision over Lauren Murphy. It’s a win that erased the memory of a quick loss to Ronda Rousey earlier this year. Bethe Correia jumped up the rankings with her third UFC win in three tries. Correia decimated Shayna Baszler with precise, effective striking. There are some more great match-ups ahead in the next month. Cat Zingano finally returns to action in September when she meets Amanda Nunes at UFC 178. Also, Miesha Tate welcomes Japanese star Rin Nakai to the UFC in Japan in what should be a great fight. September should be a very important month for the bantamweight division as a whole.

The flyweight division is dwindling with fighters moving up or down a weight class in the attempt to make the UFC. That said, there is still some great talent in the division. Jennifer Maia solidified her third-ranked spot with another big win in August, earning a hard-fought decision over Elaine Albuquerque. It is a win that could justify a title shot in the near future. Viviane Pereira took a win over Gina Naja that continued to push her up the ranks. Looking into September, the flyweight division is going to get even thinner. Alexa Grasso and Delaney Owen will be moving to 115 pounds. They fight Ashley Cummins and J.J. Aldrich, respectively, at Invicta FC 8. Brenda Gonzales will move up to 135 pounds at Resurrection Fighting Alliance when she fights Heather Bassett. A win could really open the eyes of the UFC and potentially gain her a contract. There will definitely be some major changes in the rankings next month.

The Ultimate Fighter 20 is coming. Before you know it, there will be a UFC champion in the strawweight division. With the reality show just around the corner, fans will finally see women like Carla Esparza, Tecia Torres, Joanne Calderwood and Felice Herrig in action again. In the month of August, Mizuki Inoue avenged a disqualification loss against Emi Tomimatsu by tapping her out in a rematch to capture Deep Jewels gold. That win will continue to open the eyes of the UFC, which is reportedly interested in the young Japanese superstar. In September, there’s an important title fight in Invicta, where Katja Kankaanpaa and Stephanie Eggink are set to vie for the vacant 115-pound title in what should be an excellent scrap. Win or lose, both ladies have to be on the UFC’s radar.

The atomweight division finally got cooking in August, and it looks like it will continue in September. Seo Hee Ham kept her winning ways going by defeating Alyona Rassohyna in South Korea. Elsewhere, Ayaka Hamasaki made a successful 105-pound debut when she bested Naho Sugiyama in Japan. In Ireland, Catherine Costigan remained undefeated by submitting Noelia Molina. In September, top-ranked Michelle Waterson defends her Invicta title against Yasuko Tamada on the first-ever UFC Fight Pass broadcast of an Invicta event. On that same card, Jodie Esquibel meets hungry up-and-comer Jinh Yu Frey, who looks to reclaim a top-15 spot in her young MMA career. Things are really starting to take shape at 105 pounds.