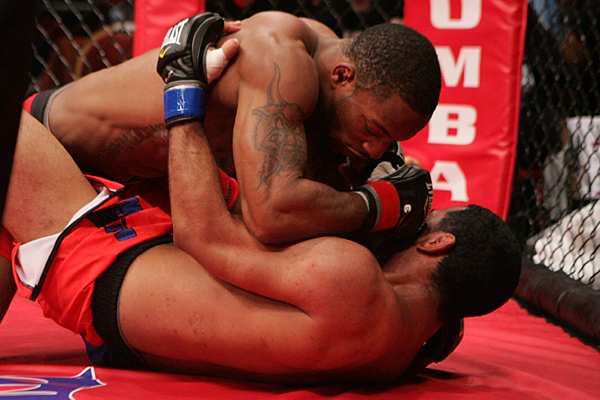 In its early days, ONE FC appeared poised to take over as Asia’s new Pride. The promotion was attracting elite talent from around the world and constructing cards with notable names from top to bottom. Now under the slightly tweaked name of ONE Championship, the promotion appears to be on a slightly different path. The “Kingdom of Warriors” card is composed primarily of fighters who have not grabbed the spotlight yet, and the promotion appears to be focused on building the most literal definition of homegrown talent ever seen. Meanwhile, it still has some of its stars under contract. This includes the company’s bantamweight champion, Bibiano Fernandes. The Brazilian first grabbed the interim title in 2013 and quickly followed up by becoming the promotion’s undisputed champion. Now, he’ll put the belt on the line against challenger Toni Tauru.

Fernandes, a lightning-fast jiu-jitsu ace with six submission wins in his MMA career and a long list of World and Pan American grappling championships, took the interim gold when he defeated Koetsu Okazaki and became the undisputed king with a win over Soo Chul Kim. The 35-year-old, who trains out of AMC Pankration, made two successful title defenses with wins over Masakatsu Ueda and Dae Hwan Kim. The veteran bantamweight made his pro MMA debut in 2004 and lost two of his first three fights, but those losses came to elite fighters Urijah Faber and Norifumi “Kid” Yamamoto. He went on to win 16 of his next 17. The Brazilian Jiu-Jitsu black belt has only one finish via strikes, which came against Antonio Banuelos. He has gone the distance in 10 of his victories, and he holds wins over such notables as Masakazu Imanari, Joe Warren and Joachim Hansen.

Tauru is an up-and-comer based out of Team East Front in Finland. “Dynamite” also got off to a slow start in his pro career, recording a draw and a loss over his first two fights. He has excelled with 10 straight wins, however, and captured the Cage Warriors bantamweight title in his last outing against Corey Tait. Tauru, who submitted Tait in the final seconds of the fourth round, is also an ace on the ground. He has claimed seven of his victories by way of submission, including six via rear-naked choke. the gem of his highlight reel, though, is gogoplata submission of Emil Hartsner in November 2013. The Finn is aggressive in chasing submissions, but he can hold his own wherever a fight may go.

Tauru has an excellent resume, but it doesn’t feature a long list of notable names. Fernandes, on the other hand, has a proven track record against top-level talent. That experience and the Brazilian’s world-class jiu-jitsu skills could be the difference in this fight.

Neither fighter has much of a reputation as a striker, but they should be evenly matched in that realm. Tauru doesn’t have any knockouts on his record, but he works well out of the clinch, fights long and uses knees in a very effective manner. Both men tend to use their striking as a tool to set up takedowns.

The more interesting exchanges will come if this fight goes where any fight fan should hope to see it go: to the ground. These are two master technicians when it comes to the submission game, but Fernandes has the better credentials. Tauru’s going to put pressure on Fernandes with submission attempts, and the champ might be forced to take a more conservative approach in this contest. The Brazilian does have a decision-heavy record, and it’s likely to grow when this pair hears the final bell.

Titan Fighting Championship has seen three different broadcast homes over the years. It was part of the AXS TV rotation for a while, then moved to the CBS Sports Network, and now it has found its newest home with UFC Fight Pass. The promotion’s 34th offering will mark its Fight Pass debut, and the promotion is stacking the card. The lineup features four title fights. Lightweight champion Pat Healy and challenger Marcus Edwards, who steps in on short notice for the injured Mike Ricci, top the bill, but we’ll focus on the featherweight title showdown between UFC veteran and reigning champ Kurt Holobaugh and undefeated challenger Andre Harrison.

Holobaugh made his pro debut in 2011 and posted wins in his first nine contests. Then he moved to Strikeforce, where he met this Titan card’s headliner, the aforementioned Healy, in a lightweight contest. Healy handed Holobaugh his first career loss, but it didn’t prevent the Gracie Barra Northshore fighter from transitioning into the UFC. In his lone Octagon appearance, Holobaugh clashed with Steven Siler and emerged with his second straight loss. He was released from the organization. After picking up two quick submission wins on the regional circuit, Then the Louisiana-based fighter was scooped up by Titan. He debuted with a decision win over Eric Marriott, scored a 15-second TKO of Lloyd Woodard and captured the featherweight crown with a split decision nod over Desmond Green. Holobaugh has seven submission wins and three victories by way of strikes.

Harrison made his pro debut as a lightweight in 2011. He transitioned to the featherweight division in his sophomore bout and picked up three victories at 145 pounds and a win at a 140-pound catchweight before competing for the vacant Ring of Combat belt against Matias Vasquez. Harrison put Vasquez away with strikes in the first round to claim the crown. After more than a year of inactivity, he returned and took a split decision win in a title fight against Jeff Lentz. The former NCAA Division II All-American wrestler signed with Titan and claimed decision wins in his two Titan appearances. He trains out of Bellmore Kickboxing Academy and Joe Scarola’s Gracie Barra Long Island, but he also teaches at Empire MMA in Queens. His training partners include UFC fighters Dennis Bermudez and Chris Wade.

Holobaugh is no slouch, but he has lost some grinding fights and barely emerged with the win in others, most notably his recent title fight with Green. Harrison’s grinding style and wrestling background could give Holobaugh trouble. And then there’s Harrison’s boxing. The former Ring of Combat champion is a bit flat-footed at times, but he throws quick combinations and has excellent power behind his strikes. Holobaugh tends to move more, but he leaves himself open to counters and takedowns.

Holobaugh hopes to make the leap back into the UFC soon, but he has a big hurdle to clear in this fight. Harrison is capable of taking the UFC veteran to the canvas, where he can grind away by utilizing his ground-and-pound. Holobaugh will remain competitive, but he won’t be able to defend against all the aspects of Harrison’s game. This title fight is headed the distance. The undefeated challenger will leave the cage with his spotless record intact and a new piece of gold around his waist following the reading of the judges’ scores.

Deep’s upcoming Cage Impact 2015 event features a number of notable names, including Dream veterans Satoru Kitaoka, Michihiro Omigawa and Tatsuya Mizuno. Kitaoka is involved in one of the evening’s two title fights, but it’s the other championship bout, a welterweight affair pitting champion Yuta Watanabe against challenger Keita Nakamura, that features the more promising match-up from this event.

The 30-year-old Watanabe has been fighting professionally since 2004. He won just five out of his first 11 fights and posted a 5-2-4 mark in that span. He’s gone 14-3 since December 2006 and captured the Deep welterweight crown in April 2014 as part of his current seven-fight winning streak. The Alliance-Square fighter has 11 victories via strikes and five wins by way of submission. After defeating Taisuke Okuno for the Deep belt, Watanabe successfully defended the crown against Yuya Shirai. Watanabe was able to end Shirai’s night via TKO in just over two and a half minutes.

Nakamura, a UFC veteran, had three chances with the world’s most well-known MMA organization. Now, over seven years removed from his most recent Octagon outing and the short-lived retirement that followed, “K-Taro” is on a 12-2 run, with one no-contest. He is arguably one of the better lightweights not under UFC contract. Nakamura’s UFC appearances came in late 2006 (a unanimous decision loss to Brock Larson), 2007 (a unanimous decision loss to Drew Fickett) and 2008 (a split decision loss to Robert Emerson). The Japanese fighter reigned as the Sengoku welterweight champion, and he now rules over the Deep 170-pound division. Nakamura is 29-3-2 over his career outside the UFC. Nakamura has six wins via strikes and 13 victories by way of submission. The 31-year-old is known for his grappling skills and has participated in the 2009 and 2011 editions of the Abu Dhabi Combat Club (ADCC) Submission Wrestling World Championships.

Nakamura, a noted grappler, has found mixed success against opponents who are primarily strikers. He dropped a decision to Frank Camacho, ended up with a no-contest against Kwang Hee Lee and scored a quick submission of Nobutatsu Suzuki. He started off his career with a 15-0-2 stretch, but he’s had an up and down road ever since his UFC debut. He’s a difficult fighter to stop, although it has been done twice, but he can be outpointed.

Watanabe’s recent losses include two quick TKO defeats, and Nakamura, despite a grappling base, is quite capable of finishing fights with his fists. The champ is enjoying the longest winning streak of his career right now, but Nakamura should be able to bring it to a halt with a knockout finish after softening Watanabe up with some work on the ground.