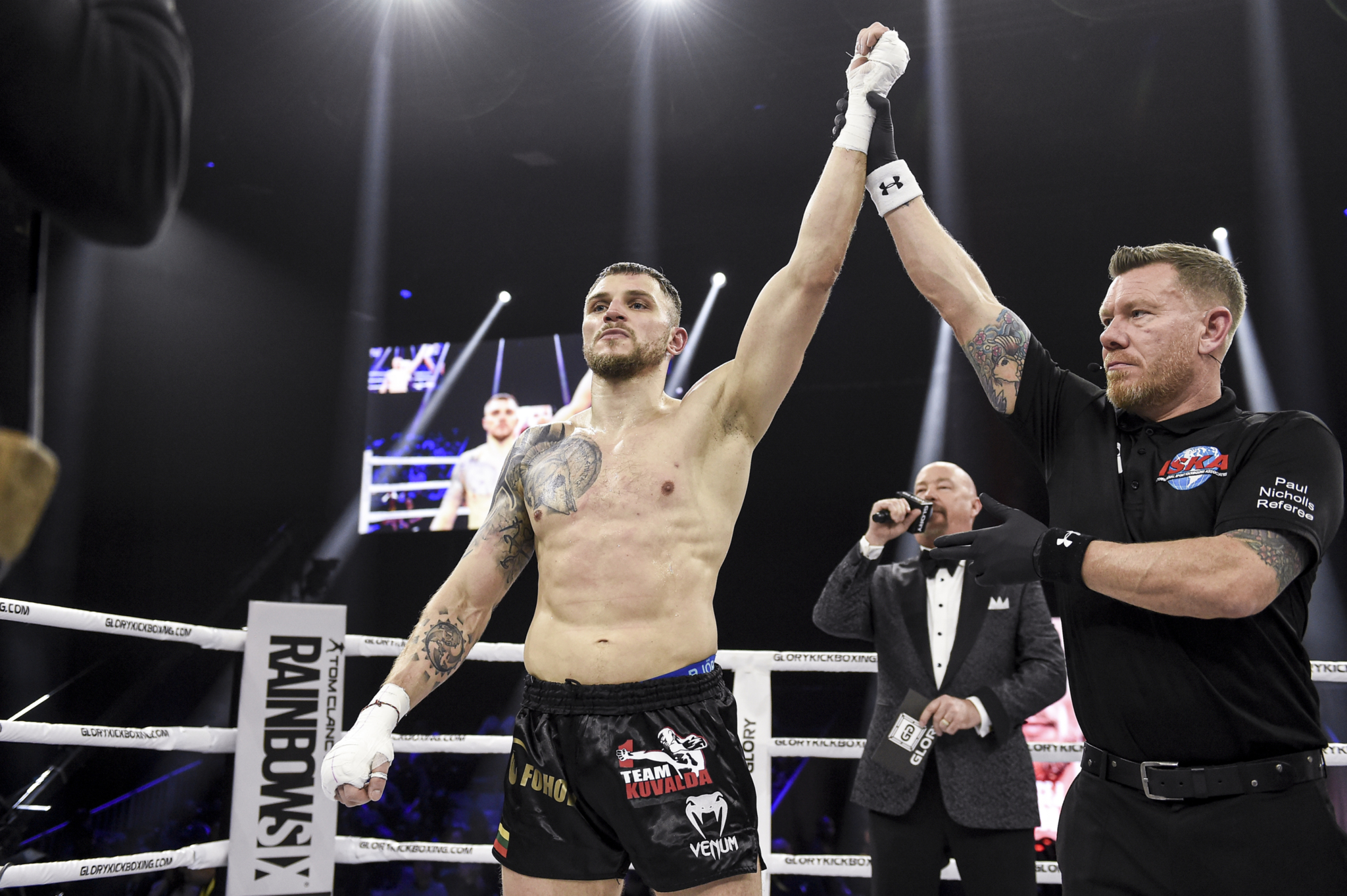 GLORY’s Sergej Maslobojev: ‘The Stars Are in the Sky’

Sergej Maslobojev is a GLORY newcomer who burst into promotion with two spectacular first-round knockouts. He is not yet in GLORY’s top five for his division, but Maslobojev has already proven that he is one of the most dangerous light heavyweights in kickboxing. Combat Press recently spoke with the Lithuanian standout.

You are one of the best and most famous fighters of Lithuania. Can you call yourself a star in your homeland? Do people on the streets often ask for a photo or an autograph?

Today, I am the most famous and most titled fighter in Lithuania! I never considered myself a star, although other people already call me the martial-arts legend in Lithuania.

My opinion is that all the stars are in the sky, and if you begin to consider yourself the one, then your downfall will begin soon. Therefore, I always try to remain myself — to remain a simple and “hungry” athlete.

I am asked to act in TV programs, participate in podcasts, talk on the radio, share my experience with young people in schools, prisons, rehabilitation centers, and so on. People on the street recognize [me] and ask to make a photo. On social networks, they ask for advice on sports and on motivation and on men’s issues in the same way.

You started kickboxing at the age of 18. What kind of sport did you do before?

Yes, I started kickboxing and MMA only when I was 18 years old. Before this, I was engaged in weightlifting from the age of 15 and at the age of 17 became the champion of Lithuania among youth, lifting 125 kilograms with power snatch and 145 kilograms with push, while my weight was 80 kilograms. But after I moved to the adult category, I realized that I can’t get Olympic gold with my physique. Therefore, the stage in my life came to make serious decisions, and to start this sport that always attracted me, but which I was always afraid of!

How do you train during quarantine?

Keeping in shape mode, but no more. I got bars — horizontal bar in the yard — and hung a punching bag. I try to go out and exercise at least once a day. Although the motivation is very weak — you can’t work with a coach and in pairs — so it’s very difficult to work out every day alone, but it [allows me] to devote more time to the family and educate my elder son, Ramir.

Are there restrictions for internal travel in Lithuania?

Within the country, restrictions are imposed only on holidays, but when everything around does not work, then there is nowhere to go. I also don’t risk going to [visit] my parents. I really want to visit them, but only after quarantine.

Tell us about your Champion’s House.

Champion’s House is an ideological project. [The] idea was to create a community of people who want to wake up their inner champion. Take the first step in self-development and push people to become their best versions, not only in sports but also in life. We do not make professional athletes; we try to motivate people to become better today than they were yesterday.

On the website of the Champion’s House, there are posts in both Lithuanian and Russian. What language do you most often communicate in during everyday life?

Honestly, I speak Russian rarely [in these] last years. [My] social circle is a majority of Lithuanian-speaking people. Sometimes it happens that even some words in Russian are forgotten, offensively of course, but you have to adapt to your environment.

You signed a contract with GLORY. Was it your team’s initiative, or did GLORY come to you?

GLORY, like all other organizations, such as ONE FC, FFC, KOK, Biggers Better, etc., came to me themselves. I always wanted to participate with them, and they called me. In my life, it often happens to me that you want something badly, often think about it, work hard, and try to share the good things in life, and in exchange, life gives me opportunities.

Does the GLORY contract forbid you from performing in other promotions?

While I am not in their top-five ranking, I can participate in other promotions, though there should be at least five weeks [between it and any fight in] GLORY, no less. But in terms of finances, I don’t think that anyone can make a profitable offer.

Who was the most difficult opponent in your career?

I always answer this question in the same way: the most difficult opponent of mine was always myself. Those few fights that I lost, I’m sure that I was stronger and more technical than my rivals, but the only thing that bothered me was the psychological preparation. I just went out to fights terribly burnt out. But recently, I began to find answers to my questions, and my performances began to amaze and delight many martial-arts lovers.

From 2011 to 2013, you competed in professional boxing. Were you planning to completely switch to the boxing ring at that point?

Yes, I really wanted to, but the bureaucracy at the American Embassy put a spoke in the wheel. I did not get a visa to America and decided to return to what I do best: kickboxing!

You also competed in MMA. You held your penultimate battle in 2012. Why did you decide to return to the cage in 2019?

I began to look for prospects and the opportunity to let the world know about myself differently, because my second son, Raon, was going to come into the world. [I had to] start earning more, and it turned out, coincidence or not, but right after this fight I received a letter from GLORY.

Who is the best GLORY fighter today, regardless of weight class?

The kickboxing phenomenon of Alex Pereira. His technique is very non-standard, but no one can pick up the key to it. On the contrary, he very successfully selects the distance and combinations that send people to a knockout. It would be very interesting to see him fight with Artem Vakhitov, whom I also like as a fighter (fast, sharp, changing stances). I think life will add up so I will be able to test my strength with Artem and the second time with Alex. It will be very difficult, but not impossible.