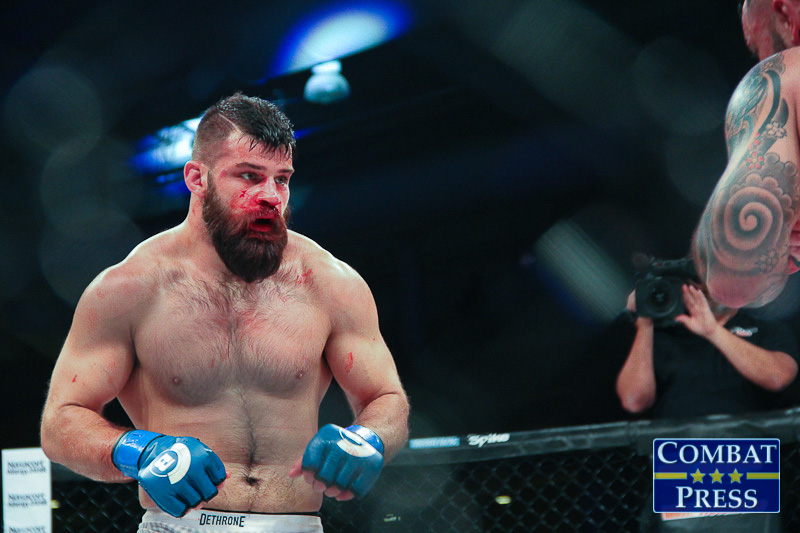 One to Watch: UFC 258 – Maki Pitolo vs. Julian Marquez

This Saturday’s UFC 258 main card features a pair of fiery middleweights. The match-up pits Maki Pitolo against Julian Marquez in a battle of two game, durable fighters. It’s also a duel between competitors with among the most unique nicknames in the company: “Coconut Bombz” and “The Cuban Missile Crisis.” This is likely to be a striking affair that fans should not miss.

Pitolo compiled an 11-4 record with wins in Bellator and Cage Fury Fighting Championships before making an appearance on Dana White’s Contender Series. He scored a 97-second TKO over Justin Sumter to earn his place on the UFC roster.

His lone Octagon victory thus far came against Charles Byrd at UFC 250. After a competitive first round, Pitolo drove Byrd to the cage early in the second frame and unloaded vicious punches to both the head and body. Pitolo initiated a clinch and then tripped his opponent. He then unloaded with furious ground-and-pound strikes to force referee Herb Dean to intervene.

Whilst Pitolo is currently 1-3 in the Octagon, his losing efforts against Callan Potter and Impa Kasanganay were very competitive affairs. Pitolo’s UFC record is slightly misrepresentative. Moreover, after his loss to Kasanganay, Pitolo moved from his native Hawaii to join the Xtreme Couture team, headed by Eric Nicksick, in Las Vegas. With quality training partners and facilities, Pitolo should show vast improvements in his game.

Marquez, meanwhile, is set to return to the cage after a 31-month layoff. He’s another Contender Series find, having gained entry to the UFC with a second-round TKO of Phil Hawes during the 2017 season. In his lone UFC victory, Marquez submitted the ever-dangerous Darren Stewart with a front choke in the second round of their UFC on Fox 26 bout. However, Marquez has only fought once since that late 2017 contest. Unfortunately, it resulted in a split-decision loss to Alessio Di Chirico.

Marquez is a powerful striker who looks to apply pressure and finish his opponents. He has a perfect finishing rate, with six knockouts. Now training out of Glory MMA and Fitness with head coach and great MMA mind James Krause, Marquez will have a calculated, precise game plan this weekend.

On the surface, this match-up pits two fighters coming off losses against each other, but that is exactly its brilliance. These are two hungry strikers who need wins to secure their UFC careers. They will leave it all on the line on Saturday. This fight will not disappoint, and is definitely one to watch.