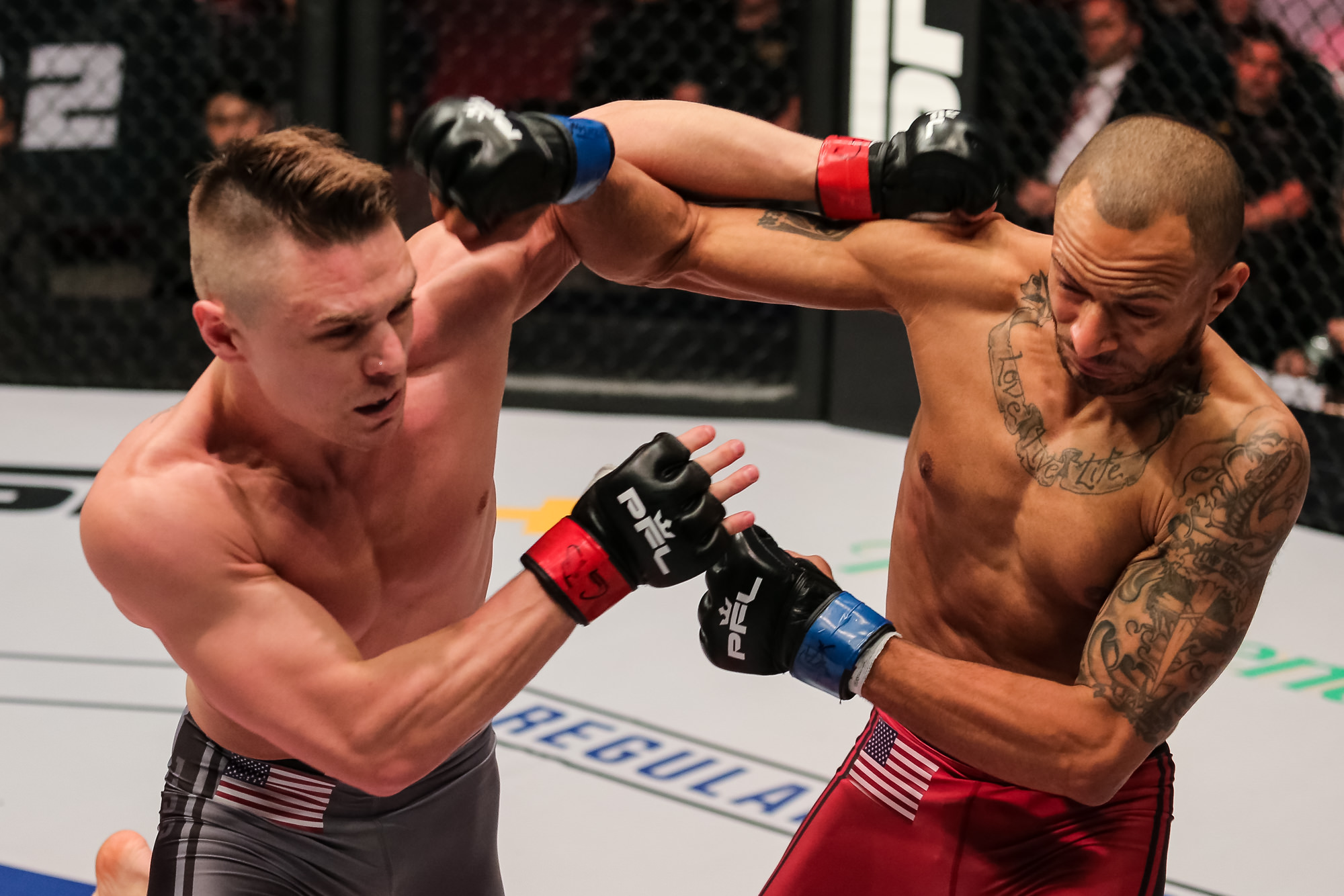 The PFL’s season format includes standings that determine which fighters make it to the playoffs. Extra points go to competitors who score finishes. Of course, not every win is equal, nor is every loss. For this reason, we here at Combat Press will track the PFL divisions throughout the regular season by way of power rankings, intended to provide an insight to how these fighters looked in an individual fight and how it projects on their momentum and future progress through the season. Here’s how the featherweights and lightweights stack up after their first event.

1. Movlid Khaibulaev (1-0, 6 pts, No. 1 in standings): It has to be every fighter’s dream to put a giant exclamation mark on their promotional debut. Khaibulaev made the most of his first PFL appearance by connecting with a flying knee to the cranium of Damon Jackson for a 10-second knockout finish. The 28-year-old Dagestani fighter entered the season with an undefeated record and quickly made it known that he’s a contender.

2. Luis Rafael Laurentino (1-0, 6 pts, No. 2 in standings): It wasn’t quite as emphatic as Khaibulaev’s finish, but Laurentino announced his arrival with a first-round finish of UFC veteran Jeremy Kennedy. The Brazilian carried a Fedor-esque 33-1 mark into the cage, but much of his lengthy record came in small regional promotions in his home country. The win over Kennedy is the first step for Laurentino to prove he’s a legitimate top featherweight.

3. Lance Palmer (1-0, 3 pts, No. 4 in standings): Last season’s champ provided a strong showing against Alex Gilpin to take the decision win. He wasn’t quite as dominant as rival Andre Harrison, but Palmer lands one spot above Harrison based on their history from last season.

4. Andre Harrison (1-0, 3 pts, No. 3 in standings): Harrison has always been a grinder, and he demonstrated his ability to completely dominate an overmatched foe on Thursday night against Peter Petties. The judges gave Harrison the 30-27 nod, but it could have easily been scored a 30-26 or 30-25. Harrison joins Palmer as one of the favorites this season.

6. Alex Gilpin (0-1, 0 pts, No. 7 in standings): Gilpin managed to survive for three full rounds with Lance Palmer. While that’s not a huge feat — Palmer can be a decision machine — it’s better than any of Palmer’s 2018 regular-season opponents fared in their outings with the eventual division champ.

7. Steven Siler (0-1, 0 pts, No. 6 in standings): Given his run in 2018, Siler appeared to be a solid pick for another good season in 2019. He stumbled out of the gates, however, and lost to Gadzhi Rabadanov, a Russian veteran who hasn’t always displayed consistency in his career.

8. Jeremy Kennedy (0-1, 0 pts, No. 9 in standings): After a 3-1 UFC run, Kennedy looked like an interesting addition to the PFL featherweight field. He had a chance to expose Luis Rafael Laurentino as a lesser fighter with a bloated record, but instead served the opposite purpose of validating Laurentino as a legitimate talent. Kennedy’s loss is a serious blow to his season.

10. Alexandre Almeida (0-0, 0 pts, No. 12 in standings): Almeida was the other offender at the scales. These two men now face a PFL release if they miss weight again. That’s an awful way to kick off the season.

11. Peter Petties (0-1, 0 pts, No. 8 in standings): Yes, Petties made weight and competed, but he was utterly blanketed by Andre Harrison for three full rounds. Petties had the worst record of any featherweight entrant this season, and Harrison exposed weaknesses in his game that will be further exploited by future foes, especially Lance Palmer if the two ever meet.

12. Damon Jackson (0-1, 0 pts, No. 10 in standings): What’s a worse look than a three-round decimation at the hands of an opponent? How about a 10-second slaughter? Jackson was on the receiving end of the flying knee delivered by Movlid Khaibulaev. The quick loss easily puts Jackson at the bottom of the pack. On the bright side, at least he made weight.

1. Natan Schulte (1-0, 6 pts, No. 2 in standings): The 2018 lightweight champion carried his momentum over to his 2019 season debut. The 27-year-old found a rear-naked choke to submit Yincang Bao in the first round of one of the event’s featured fights on ESPN2. Schulte entered the season holding past victories over Chris Wade on two occasions and a championship nod over Rashid Magomedov from last season. He has the upper hand in this field.

2. Akhmet Aliev (1-0, 6 pts, No. 1 in standings): The most convincing lightweight performance of the night arguably came from Aliev, who dropped Carlao Silva with punches in the first round. The 29-year-old has been on quite the run since suffering a loss to Vener Galiev in 2015, and he immediately announced his arrival in the PFL. Aliev has the ability to get some highlight-reel stoppages as the season progresses.

3. Rashid Magomedov (1-0, 3 pts, No. 3 in standings): The runner-up in the 2018 season returned to kick off the 2019 season in strong fashion. The Russian left the UFC after posting five wins in six outings with the promotion, and he proved equally strong last year in the PFL. Magomedov topped Loik Radzhabov to take the unanimous nod. He’s a definite favorite to return to the finals this season.

4. Chris Wade (1-0, 3 pts, No. 4 in standings): Wade had his hands full with CES mainstay Nate Andrews, but he managed to survive the challenge and take home the decision victory. Wade made it to the playoffs in 2018, but Natan Schulte appears to have his number. Wade will have to find the answer to that riddle if he’s to get very far this season.

5. Islam Mamedov (1-0, 3 pts, No. 5 in standings): The Russian has never lost a fight under the PFL banner — he was forced out of last season’s playoffs with an illness — but the scores from his outing against Ylies Djiroun left something to be desired. Mamedov appeared to have the easy victory, but the judges were split on the outcome. He’ll need to provide a stronger showing next time out.

6. Ylies Djiroun (0-1, 0 pts, No. 7 in standings): That split verdict likewise benefits Djiroun’s standing in the field. The French journeyman entered the fight on a winning streak that extended back to 2014, but did not include any truly notable opponents. The 27-year-old’s close fight with Mamedov was therefore a surprise.

7. Nate Andrews (0-1, 0 pts, No. 8 in standings): Andrews certainly entered this season as a well-known prospect on the American regional scene, and he gave Chris Wade a stiff test. Andrews did fall on the scorecards, but he looks like he’ll be a competitive fighter in this mix.

8. Ramsey Nijem (1-0, 3 pts, No. 6 in standings): Nijem picked up the easiest win of the night when his opponent, Ronys Torres, was not medically cleared for competition. It’s no fault of Nijem, but it’s difficult to rank him any higher when he has yet to even fight.

9. Loik Radzhabov (0-1, 0 pts, No. 9 in standings): Tajikistan isn’t exactly a hotbed of MMA talent, but “Jaguar Paw” has a chance to put it on the map. The 28-year-old lasted three rounds with Rashid Magomedov, one of the early favorites among the lightweights. His performance should add to his confidence moving forward.

10. Carlao Silva (0-1, 0 pts, No. 11 in standings): The Shooto Brazil lightweight champ ran into a freight train when he stepped into the cage with Akhmet Aliev. It’s a significant setback for Silva, whose past record has been built on the backs of some very mediocre competition.

11. Yincang Bao (0-1, 0 pts, No. 10 in standings): He was served up to Natan Schulte, and the outcome was to be expected. Bao is now 13-8 overall, and he has lost four of his last five fights. He’ll be an easy win for a lot of his fellow PFL lightweights. He only avoids the cellar here due to the unfortunate fate of Ronys Torres.

12. Ronys Torres (0-1, 0 pts, No. 12 in standings): Bummer. Brazil’s Torres was out for redemption after failed bids in the UFC and the World Series of Fighting. He had gone 12-1 since his loss at WSOF 1. Torres was set to meet Ramsey Nijem on Thursday night, but the New York State Athletic Commission denied him licensure as the result of an issue with an eye surgery Torres underwent in 2009. The PFL opted to give Nijem a win and Torres a loss, but the organization also announced that Torres is out of the season’s competition entirely.