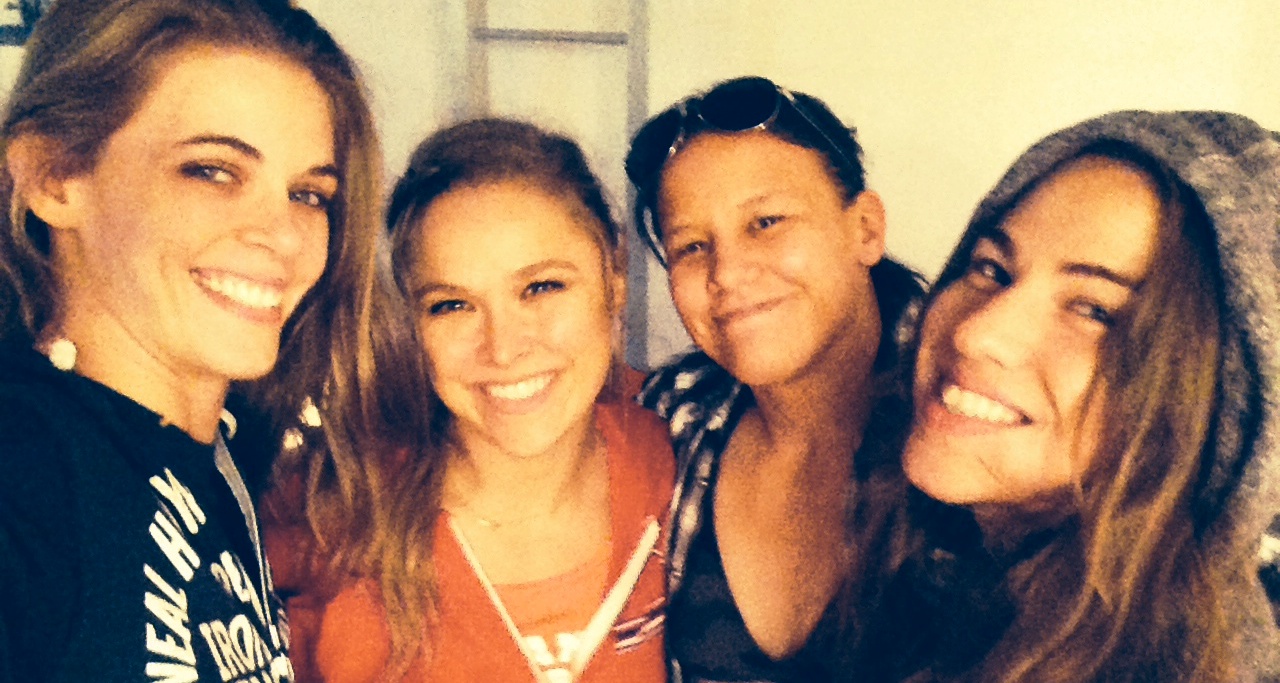 Through Thick and Thin: The Four Horsewomen Stand Tall

“What a perfect time for a blog.”

I have heard this more and more frequently as the days get closer to the Four Horsewomen conquering the summer. And it’s ticking down to the wire. So, after many, many updates and revisions (I’ve been sitting on this one for awhile now), here it is.

My subject matter is all pretty similar: MY FRIENDSHIPS ARE NOT UP FOR PUBLIC DEBATE.

This is something that bothers me so much about MMA fans. Of course, Ronda Rousey is the champ. Of course, she’s undefeated. She is responsible for putting women in the sport of MMA on the most visible platform available. But to suggest that she should “drop” any of us because we suffer a loss or a setback of any kind… well, that just shows what shitty friends you people are.

Let me put that in terms you can understand. It’s pretty shitty that you would stop being friends with someone just because their performance review at whatever desk job you guys work together wasn’t quite as good as yours. You treat your friendships like you treat being a “fan” of a fighter. All in when they win, and jump off the bandwagon as soon as they’re down. Be certain of this: none of the four of us are bandwagon friends. The Four Horsewomen group, it’s about friendship. Loyalty. Ride or die. It’s not about anyone’s job, the UFC or title belts.

Which is another thing — to say that we can’t call ourselves the Four Horsewomen until we all have UFC titles is a little asinine, as there is only one title belt in the UFC. You guys know that, right? None of us are making 115 pounds anytime soon, so… yeah. One. The Four Horsewomen is a team based on friendship. But if you guys want to go that route, I will put the four of us and our accomplishments and records up against any other four girls active and training together in MMA today. But to say that the successes and everything any of us have done, and the titles (that all of us have) are meaningless is horribly shortsighted and only shows that your knowledge of MMA lives and dies with the UFC. There is life before, after and even outside of the UFC. Let me repeat that: There is life before, after and outside of the UFC.

I was fighting before the UFC was mainstream, even for the men. I was on TV before Ronda even crossed over from pwning bitches in judo to MMA. And I will keep fighting. Wherever there are bodies to smash, I will be there. It’s not about the letters behind it.

This week, I will be at Invicta Fighting Championships to watch my friend and teammate Marina Shafir, the “Supernova from Moldova,” wreck shop. Then, I will fly to Vancouver to scope out what bodies I can smash at ECCW, some of the best pro wrestling in the area and help my buddy, Kenny Lush. I will be in Chicago to support my friend Jessamyn Duke as she shows what “gun control” really is (I’m pretty proud of that one, that is some good stuff right there!!). And I will be smiling with bloodthirsty glee, fours held high, as Ronda makes Bethe Correia contemplate whether she ever wants to get back in the cage ever again.

This summer, all four of us will risk injury and put our bodies on the line, and we’ll do it with a smile. All so that for 15 minutes or so, you people can forget that you have a shitty job that you hate, that you have to return to the following Monday. We do that so that you can suspend that reality and, for a second, imagine that you are us, or our opponents. So that you can scream your fool heads off, for or against, it doesn’t matter. But we love it. Cheer for us. Cheer against us. Love us. Hate us. None of that matters. Come watch. Appreciate. Critique (however unjustified). Tell us how if we had only spend those 15 seconds’ worth of having fun at the end of a three-hour practice for Instagram, training instead, things would be so different. Do it! Talk. Blow up social media. But keep in mind: MY FRIENDSHIPS ARE NOT UP FOR PUBLIC DEBATE.

But then, my pro-wrestling fans know this stuff. But I digress… ;)