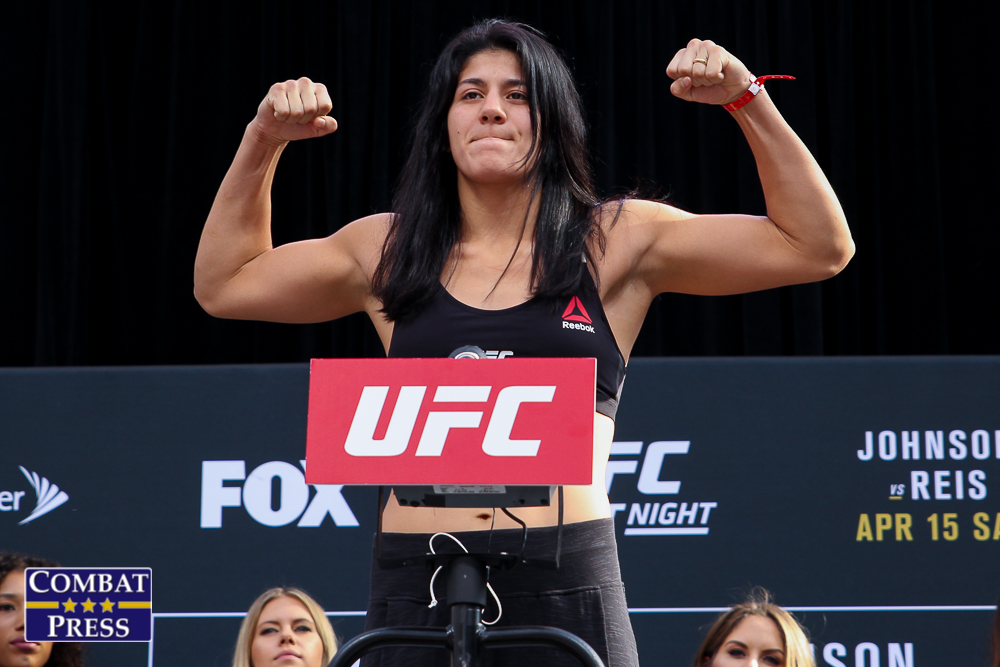 When you are analyzing a fight, or attempting to, sometimes you can think you have it all figured out and be completely wrong. That was the case for me in this weekend’s UFC 253 bout between Ketlen Vieira and Sijara Eubanks.

My thought was that Vieira would use her reach advantage, try to keep in on the feet, maybe use her jab to set up power shots, and then maybe look for late, round-stealing takedowns. Meanwhile, for Eubanks, my thought was that she would try to find a way inside, force some clinches, and look for takedowns off of those, preferring them from the clinch to increase her chance of landing in a good, dominant position.

For about 15 seconds, my prediction was totally accurate. However, it was only that way for about 15 seconds. Soon, it became clear that Vieira felt her best bet was the takedown. She would throw punches to try to set some of them up, but it was obvious that her idea was to get it to the ground by any means necessary. She was effective in that plan, too. She was able to get it down and get on top, but Eubanks, to her own credit, was able to avoid any real damage in those positions. Vieira was for the most part content to just be on top. She didn’t take a lot of chances, and, really, she didn’t need to. She was doing enough to take the round while keeping herself out of harm’s way.

After 10 minutes, Vieira had two rounds in the bank, which meant Eubanks needed something big in the third. I liked her corner’s honesty with that heading into the round. They told Eubanks that she was down and needed the finish. She came out knowing what she had to do and didn’t let the frustration she probably felt after two affect her. She was aggressive, threw hard shots that were landing, and pressed the action. I saw some people say that Vieira seemed to take her foot off the gas and just looked to get through the round knowing she’d take a decision, but I did not see that at all. Eubanks just had a great round and showed no quit. She was looking to find a way to win the fight.

Eubanks took the third round, but it was too little too late. This was a good, solid win for Vieira, a nice bounce back after she tasted defeat for the first time against Irene Aldana. It puts her back on a positive trajectory.

We all hate losing, and Eubanks won’t take any satisfaction from that third round. However, she stepped up on fairly short notice after having just fought against a tough opponent. She has nothing to hang her head over.

What’s next for Vieira? Can I answer this next week? If Aldana defeats Holly Holm, then I would be interested in seeing Vieira take on Holm. It would be a strong test for Vieira against a former champion and give us a real sense of just where she stands.

I also wanted to just quickly mention some other fights this weekend. I was unable to see these fights, at least not yet, but I feel they are worth mentioning for different reasons.

Šormová defeated Grusander via unanimous decision. I credit both ladies for taking such a tough fight. Grusander had her first fight at strawweight, and talk about a tough challenge for that first fight. The result of this fight could have even had an impact on Invicta FC. Grusander gets all kinds of props for taking the fight, but it was such a big win for Šormová and a great name to add to her resume alongside that of Kay Hansen. When things get back to normal in the world, Šormová could be a legit threat in the Invicta strawweight division.

Kubota defeated Tomimatsu by unanimous decision. The result isn’t the most shocking, as Kubota had to be considered a sizable favorite. Before the fight, Kubota made mention of interest in fighting Seo Hee Ham, saying it would be an incredible fight. I couldn’t agree more.

As an atomweight myself, I have followed Ham’s career and just love watching her fight. I also love watching Kubota fight. The reason that fight would be so incredible is that both ladies are exciting fighters. They never seem to have a boring fight, and they both have so much heart.

Ham is considered by most to be the best atomweight in the world, and I think that’s fair to say. She does have strawweight experience, having fought in the UFC where she lost three of four, but the judges were not her friends in some of those contests.

I can’t imagine this fight being contested at atomweight, so they’d need to come up with a fair catchweight. These two women actually did meet many years ago in a shoot boxing bout that Kubota won. However, that is Kubota’s world; it wasn’t MMA. As a fan, I would love to see this fight happen. Here’s hoping!