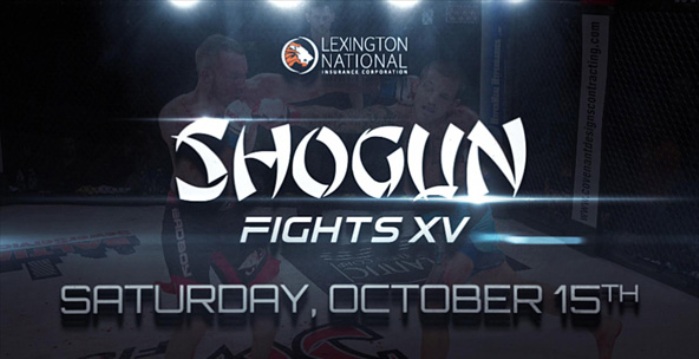 John Rallo was confident that when he helped to sanction mixed martial arts events in Maryland in 2009 and then put on the first-ever MMA event in the state, that he would make it to 15 editions of his biannual fight card, Shogun Fights. He just wasn’t always sure of the location.

The fight cards take place at Royal Farms Arena in Baltimore, which can hold up to 14,000 people. “I didn’t think the arena would work, because it was too big,” explained Rallo, the founder of the Baltimore-based promotion.

“I turned them down three or four times, but the general manager of the arena just made me an offer I couldn’t refuse,” Rallo told Combat Press. “They modified the arena for us, and no other regional show pulls the number of fans that we do.”

Shogun Fights averages about 5,000 fans at its shows, including comp tickets. Rallo would like to see that number increase to 7,000 fans, but notes that the fan base is growing, which he attributes to the passion of the fans and the following of its mainly Maryland-based fighters who compete at the event.

“The casual fan doesn’t come out for a regional show,” Rallo said. “I have other promoters ask me about putting on the type of show that we do, and the Shogun Fights guys are starting to become household names. We have guys with a following who bring in fans and family members, and I tell them ‘I’ll bust my ass for you, so you have to hustle for me.’”

Rallo compares Shogun Fights to other regional promotions who put on shows in the mid-Atlantic, including Ring of Combat and Cage Fury Fighting Championships. “Other promoters visit my show and tell me it’s better than their show,” Rallo said. “I take that as a compliment.”

But putting on a fight card twice a year doesn’t come without its challenges, including one that many promoters deal with – injuries. Shogun Fights 15, which takes place on Saturday, Oct. 15, features a super heavyweight bout with Maryland fighter Ryan McGowan, who’s currently on his fourth different opponent for the event.

“It’s not like the UFC, when one guy gets hurt and it makes headlines,” Rallo said. “When late changes happen, I can’t sell those tickets for that fighter and I’m losing money and sponsors.”

However, Shogun Fights is also taped and televised on local sports channels in the Maryland, Virginia and Washington, D.C. area, which can help fighters on the card land bigger sponsors. It can also help fighters gain exposure that they can’t get at other regional shows.

“Guys tell me that other cards have half the number of fans that we do,” Rallo said. He added that some fighters who have previously competed on Shogun Fights cards have appeared in the UFC, including Jimy Hettes, Dustin Pague and Zach Davis, who appeared on season 13 of The Ultimate Fighter. The two fighters competing for the Shogun Fights lightweight title on the Oct. 15 card, Rob Watley and Cole Presley, are also getting a lot of attention from larger organizations, according to Rallo.

“The longer we’re around, the more opportunities there will be,” Rallo said. “I’m doing my best to find fighters from the DMV and develop our guys and our talent. Ring of Combat has sent more than 100 guys to the UFC, and I want to be a consistent feeder to them as well.”

Rallo added, “It takes time to develop talent, and other guys come to our show and tell me they want to join up. I want to help these guys by giving them opportunities that I never had.”

A black belt in Brazilian Jiu-Jitsu, Rallo started competing in the sport after an ankle injury ended his athletic career in baseball and football. Rallo is also the head trainer at Ground Control Baltimore and described getting MMA events sanctioned in Maryland as a “challenge,” but described working with the state of Maryland as “great.”

“I’m the first person they call when they need input on putting on cards and they’re willing to learn,” Rallo said. “Pat [Pannella, executive director of the Maryland State Athletic Commission] doesn’t act like a know-it-all and has an open mind. If we disagree on something, then we talk it out and he hears another opinion.”

“I’m always looking to make the fan experience better with our visuals and HD technology,” Rallo said. “Our production crew is always looking to improve, and we also welcome other companies like Harley Davidson. I want every card to be an event, not just a fight. I’m all about everyone coming and having fun and making it an entire event.”

Rallo also plans to introduce title belts for the flyweight and bantamweight divisions, joining titles that already exist at Shogun Fights for featherweight, lightweight and welterweight. Although Rallo wasn’t sure what the future would hold when he started this endeavor in 2009, he’s hopeful that when the event is more established, he can explore holding events in other locations beyond Baltimore.

“I take nothing for granted,” Rallo said. “I keep plugging along and keep it business as usual, while always looking to make it bigger and better. As our fan base grows, I try to keep bringing in bigger names. I believe we put out a great product and I don’t stress as much about paying the bills. I worry more about the health of our fighters.”