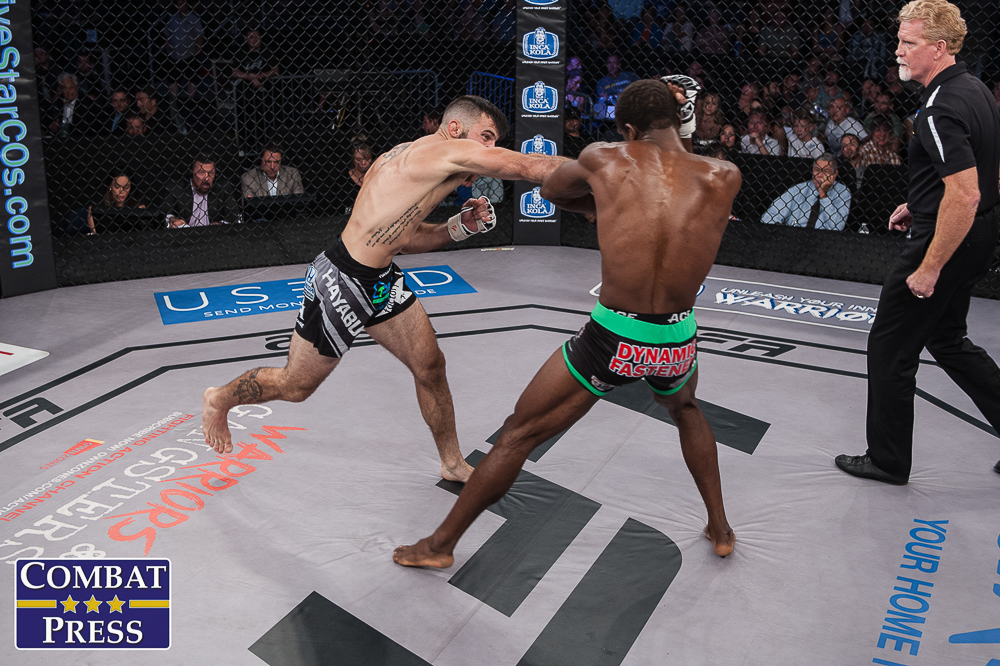 Out of Obscurity: Paramount MMA, TKO 42 and Shogun Fights

The promotion headed by former UFC fighter Tony Sims returns to deliver an event dubbed “Contenders.” The title is fitting for a show that includes a number of prospects, including some who have even competed for the Legacy Fighting Alliance. One of those men is featherweight Derek Brenon. Brenon headlines the show opposite undefeated up-and-comer Jake Heffernan.

Brenon, a 28-year-old training out of Factory X Muay Thai in Colorado, has a black belt in judo and was an NCAA Division III All-American wrestler. He topped six amateur opponents, all via stoppage, before making his pro debut in September 2014. Brenon kept his stoppage streak rolling with a first-round submission of Evan Scott and first-round knockouts of Don Magboo and Thad Frick. He finally went the distance in his fourth pro outing when he faced and defeated Myron Baker. Brenon tacked on a 24-second submission finish of Jesse O’Rullian before jumping to the LFA, where he decisioned Boimah Karmo. Brenon then headed to the Sparta Combat League, where he suffered a setback in a fourth-round stoppage loss to Justin Gonzales.

Heffernan matches Brenon in age, but his record features one less loss. The Texas-based fighter went 5-2 as an amateur and suffered both losses by way of submission. The Gracie Barra Woodlands and Team Tooke MMA product made his pro debut in early 2016 and has been a Fury Fighting Championship mainstay ever since. He scored finishes in his first two pro bouts, but he has gone the distance in his three most recent contests. Heffernan has only met one opponent who held a winning record at the time of their fight, and the combined mark for his five victims tallies out to 7-15.

Brenon opts for aggression, pressure and, quite frankly, chaos. He tends to throw a lot of haymakers, and he also mixes in elbows, knees and forward movement with regularity. His approach can lead to more scrambles and wild exchanges, but it’s been a very effective style for the 28-year-old. He doesn’t tend to land on the bottom, and his combination of judo and wrestling backgrounds should serve him well against a grinder like Heffernan.

Neither of these men have tackled big-name opponents, but Brenon has at least encountered some tougher opposition, including one man who defeated him. Heffernan simply isn’t at that level. The Texan is capable of grinding out decisions against the likes of Colin Wright, who is now a mediocre 5-4, but he might find it a much more difficult task to hang with the likes of Brenon.

Heffernan’s ammy defeats came via submission, but his chin didn’t exactly look solid against the aforementioned Wright. The one time Wright winged a solid punch, Heffernan was clipped and started backing up. Brenon’s going to throw with a lot more regularity and power than Wright. As soon as one of Brenon’s haymakers slips through Heffernan’s guard, the end will be near. Brenon will likely find the TKO, though a submission after a knockdown is also a possibility.

When MMA analysts talk about the new breed of mixed martial artists, they’re describing youngsters like the 20-year-old Laramie. “The Truth” has a trophy case full of grappling and kickboxing awards, and he had his first pro MMA fight when he was just 17. Laramie even traveled to Japan for that debut outing, which came under the Pancrase banner. After scoring first-round finishes of Koshi Obata, Luke Noel and Yvon Agenord, the prospect dropped a split decision to Vince Murdock. Laramie added two more knockout wins before suffering another setback when he was finished in the first round by Alex Morgan. As usual, the Maximum Training Centre export recovered and regained his form. He’s gone on to win two fights — a submission finish of Jimmy Spicuzza and a title-winning decision nod over Charles Jourdain — and capture TKO gold.

The 33-year-old Nogueira won the Bitetti lightweight grand prix at Bitetti Combat 11 in 2012, but he went on to lose two fights under the Bitetti banner before righting the ship. Through his most recent 12 fights, he has 10 wins, just one loss and a no-contest. “Andrezinho” holds two victories over UFC veteran Willamy “Chiquerim” Freire. The Team Nogueira fighter was a finisher for much of his early career, but he’s gone the distance in five of his last 12 fights, including a loss and a fight that eventually ended up as a no-contest. Overall, he has 11 submission wins and nine victories by some form of knockout.

Laramie has the potential to become a future star in the sport, but early losses are a concern. Other than in his victory over veteran Japanese fighter Obata, the 20-year-old has been tangling with mid-tier regional talent. His win over the formerly undefeated Jourdain is a step in the right direction, but he suffered losses to a pair of fighters who each held 6-2 marks entering their fights with Laramie.

Nogueira brings a much deeper resume and an elite camp to the table. The Brazilian decisioned the aforementioned Morgan, the same fighter who stopped Laramie. He’s also gone the distance with the likes of Gleristone Santos, Renato Carneiro, Alexandre Pimentel and Chiquerim. He’s a tough fighter and not a very easy out.

Not every young talent lives up to the hype. Laramie might be one such fighter. He’s solid, but just not quite skilled enough to overcome the better competition he’s bound to encounter. Nogueira certainly qualifies as the toughest task Laramie’s been tasked with in his brief run in the sport. The Brazilian has experience and skill on his side.

Nogueira has been playing a more conservative game lately, but he’s still a finisher. Laramie has suffered a knockout loss before, and he could end up getting his bell rung again here.

The last time we featured Sean Brady in this series, he was defending his Cage Fury Fighting Championships crown. Now, the CFFC welterweight champion strays from the only employer he’s known during his pro career. Brady lands with Shogun Fights for the promotion’s Florida event. The title won’t be on the line when Brady meets The Ultimate Fighter 16 winner Colton Smith in the evening’s main event.

Brady debuted in 2014 with a 33-second technical knockout of Paul Almquist. He added decision victories in his next three outings, including a fight against veteran Rocky Edwards. His next victory, a 57-second spinning-backfist knockout, came against Legacy Fighting Alliance and World Series of Fighting veteran Chauncey Foxworth. Brady captured the vacant Cage Fury title when he scored a first-round submission finish of Tanner Saraceno. He made a successful defense of the belt in October when he submitted Mike Jones. The 25-year-old was perfect through five fights as an amateur as well, with two submissions and one knockout.

Smith, 30, reached the UFC very early in his career. He was just 2-1 as a pro when he joined the TUF 16 cast, but he rolled through Jesse Barrett, Eddy Ellis, Igor Araujo and Jon Manley on the reality series before beating Mike Ricci at the finale. As a TUF winner, he was thrown to the wolves in his subsequent UFC outings and came up short against future titlist Robert Whittaker, Mike Chiesa and Carlos Diego Ferreira. The grinder rebounded on the regional scene with a win over Evan Cutts and then tacked on three more wins, including one under the WSOF banner. Smith, well known for his service in the U.S. Army during his MMA career, is a black belt in Combatives as well as Brazilian Jiu-Jitsu. He also has a high school wrestling background.

Brady’s tendencies involve catching kicks, scoring takedowns and working for position on the ground. He’s used these abilities to great effect against the likes of Edwards, Foxworth and Saraceno. He had a tough test lined up against Dwight Grant in October, but Grant was replaced by the much less dangerous Mike Jones. Now, the undefeated upstart has to clash with a UFC veteran who marched through the TUF house but couldn’t win any of his post-TUF UFC fights. This gives Brady a legitimate test while also providing him with the chance to really turn heads with a victory.

We know Smith’s game by now. He loves to grind away at opponents by using clinch work against the fence and pursuing takedowns. Even his fellow TUF finalist Ricci wasn’t capable of warding off Smith’s dull but effective style. Smith’s UFC losses have to be put in context, though. He did make it into the third round against Whittaker, the future UFC middleweight kingpin. He was then victimized by Chiesa and Ferreira, both of whom were rising prospects at the time. The losses ushered Smith out of the UFC, but he’s fared well on the regional scene ever since. Smith might not be a top UFC talent, but he’s a solid fighter all the same.

Brady has put together a respectable record up until now, but he’s stepping into the deep end with this match-up. Smith is a bigger fighter who has been in action against some of the world’s best fighters. The 25-year-old Brady is really just getting started on his own career. It might be a bit too early for him to take such a huge step up in competition.

Smith was known for his conservative style on TUF, and he’s carried that approach into his post-UFC career. He does have one recent knockout finish, but it’s usually a safe bet to expect the soldier to go the distance. Smith’s experience and accomplishments are too much to ignore. He should earn the nod over Brady.