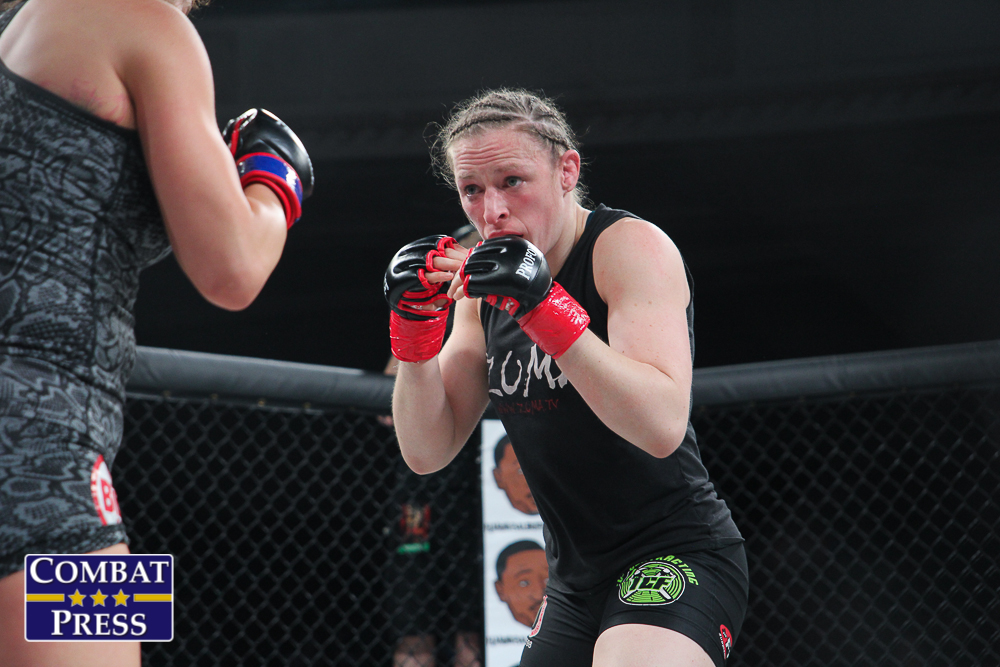 October is the time for postseason fun. The Major League Baseball playoffs are underway, with eight teams still on the hunt for the league’s top honors. Meanwhile, the Professional Fighters League has made sure that October is also the time for an MMA postseason. We won’t know the ultimate winners until the end of the year, but the organization is set to determine the finalists, beginning with the women’s lightweight and men’s welterweight divisions.

There are only four ladies left in the lightweight field. Kayla Harrison is the star of this show. The Olympian remains undefeated through five professional contests, and she only needs a win over Genah Fabian on Friday night to secure her spot in the championship bout. Former Strikeforce champion and UFC fighter Sarah Kaufman appears to be her most likely dance partner in the finals, but the Canadian athlete will have to get past Brazil’s Larissa Pacheco to make this dream match-up a reality.

The welterweight men have an even more rigorous night ahead of them. The emerging finalists will be able to boast two victories in a single night by the close of Friday’s festivities. The defending 2018 champion, Magomed Magomedkerimov, is on the hunt for a repeat, but he’ll have to fend off Chris Curtis in the quarterfinal round. Ray Cooper III, last year’s runner-up, clashes with Sadibou Sy. UFC veterans John Howard and David Michaud look to spark their own career resurgences when they battle. The Ultimate Fighter: Brazil 4 Glaico França is also seeking redemption when he meets Andre Fialho. The winners of these four bouts will return later in the evening for the semifinal match-ups.

In a non-tournament affair, the PFL introduces fans to Brendan Loughnane, a featherweight who drew the ire of UFC President Dana White for not aggressively pursuing a late finish in his appearance on Dana White’s Tuesday Night Contender Series. The British fighter takes on Matt Wagy.

The Mandalay Bay Events Center in Las Vegas will host all three of the PFL’s October playoff events. This particular show takes place on Friday, Oct. 11. The prelims air live on the ESPN+ streaming service at 8 p.m. ET. The main card follows on ESPN2 at 10 p.m. ET.

The lightweight ladies only have to fight once on Friday. Kayla Harrison draws Genah Fabian, while Sarah Kaufman gets Larissa Pacheco. Who has the tougher route to the finals?

The Olympic gold medalist judoka Harrison has been making minced meat of everyone she’s met in the PFL cage. She finished three opponents in showcase bouts during the 2018 season, prompting the organization to construct a bracket around her for 2019. She has responded by decisioning fellow postseason participant Pacheco and easily submitting Morgan Frier. Her fight with Fabian falls somewhere in the middle. Fabian is just 2-1, but she flashed her toughness in a loss to Bobbi-Jo Dalziel and then destroyed Moriel Charneski. However, all the toughness in the world won’t add up to a win over someone who can control Fabian on the mat and tie her into a pretzel with submission holds. In other words, Harrison should make it look relatively easy.

The same won’t be true for Kaufman. She has a potential war on her hands here. The Canadian veteran had an easy time with the aforementioned Frier early in the season and then got a pass when her second opponent, Roberta Paim Samad, missed weight. That makes Pacheco the most difficult challenge of the year for Kaufman, a featherweight fighting above her normal weight class. Pacheco, a UFC veteran, isn’t exactly the best fighter around. She lost both of her UFC efforts and dropped a fight to Macy Chiasson on The Ultimate Fighter, but she posted a valiant attempt at derailing Harrison in a fight she ultimately lost. Pacheco can be a wild striker who fights long, but she really only has two inches in height and reach on Kaufman. Still, she’ll make this a scrappy war. Kaufman will win, but she’s likely to be envious of Harrison’s much easier ride to the finals.

Which two welterweights survive the one-night gauntlet to advance to the finals?

We’re looking at a tough welterweight field this season, but it has a few returning members from the 2018 postseason. Magomed Magomedkerimov won the whole thing in 2018, and he did so with a submission finish of Ray Cooper III. There’s no chance of a repeat here, because both men fall on the same half of the bracket. If they do enter a rematch, it will come on Friday night in the semifinals.

Will it happen? The chances are definitely likely. Magomedkerimov has proven to be the most talented member of this group. Beyond the 2018 win over Cooper, he’s also disposed of John Howard and his quarterfinal opponent Chris Curtis during the 2019 season. Curtis is a solid boxer, but he’s not on the Russian’s level in any area of the fight game. Magomedkerimov should add another win over Curtis to kick off his night. Cooper, meanwhile, is tasked with Sadibou Sy, who made a statement with an early-season finish of David Michaud. Unfortunately, that victory looks like a fluke showing from a fighter who went 1-2-1 in the 2018 season and lost his follow-up fight against Glaico França. Cooper has had an off year after his breakout 2018 campaign, but he should find a rebound performance against Sy. Cooper will fall to Magomedkerimov later in the evening, though.

The other side of the bracket is a little less certain.

The aforementioned Howard and Michaud are set for a quarterfinal scrap in a battle of UFC veterans. Neither man can find consistency in the sport. Howard blasted Cooper, but he was just 2-2-1 in his previous five PFL contests and went 3-4 in his second UFC stint to bring his total UFC record to 7-7. Michaud has disappointed on The Ultimate Fighter, the UFC, Titan Fighting Championship, and the Legacy Fighting Alliance. While his loss to Sy looks more and more like a fluke now, nothing suggests he is capable of dominating Howard. This fight really depends on who shows up on this night, which is anyone’s guess. Howard probably takes it, but a Michaud win wouldn’t be a shocker.

The other match-up on this side of the bracket features the aforementioned França and Andre Fialho. The 25-year-old Fialho somehow made the playoff cut despite the lack of an actual victory in the 2019 campaign. Instead, he prospers from Zane Kamaka’s inability to make weight. The Portuguese fighter could be in for a rude awakening when he collides with França, who finished both Sy and Gamzat Khiramagomedov during the 2019 season. The lightweight winner of The Ultimate Fighter: Brazil 4 has done well outside of his underwhelming showing in his post-TUF appearances with the UFC, and those UFC losses came to the very tough duo of James Vick and Gregor Gillespie. França has seemingly found his groove and could emerge as the evening’s breakout star by marching through Fialho and either Howard or Michaud. This will land him the finals spot opposite Magomedkerimov.

Loughnane, you might recall, was the fighter on the receiving end of UFC President Dana White’s criticism after a June win on Dana White’s Tuesday Night Contender Series. The UFC boss opted to pass on Loughnane, who chose a conservative takedown attempt in the closing seconds of a fight he had won, but the British fighter’s exposure on the Contender Series ultimately helped his stock and landed him a spot on the PFL roster. Now, he’ll make his promotional debut in a showcase bout against Matt Wagy.

Make no mistake about it, this is definitely a showcase for Loughnane. The UFC veteran — he made one appearance with the company in 2012 — and former BAMMA featherweight title challenger has been paired with a mid-tier foe whose most notable win came against Edir Terry, a relative unknown. He’s coming off a loss under the Titan Fighting Championship banner and has typically struggled outside of the smaller West Coast regional circuit.

Loughnane’s only three setbacks are decisions, and two of them were split verdicts. These stumbles came against Mike Wilkinson, Tom Duquesnoy and Pat Healy. His Contender Series win came over Ring of Combat standout Bill Algeo. Loughnane is exactly the type of fighter who can overwhelm Wagy, who was stopped in all but one of his defeats.

To add fuel to the fire, this is Loughnane’s first outing since White’s comments. Don’t be surprised if he’s motivated enough to add to his 10 knockout wins.