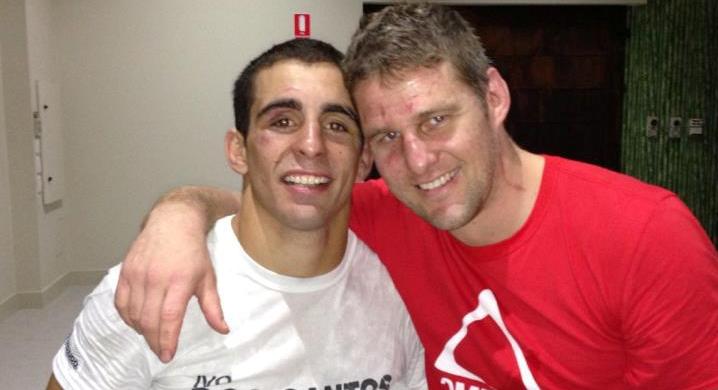 Ivo Dos Santos was 15,744 kilometers away from home. He was working toward putting the final touches on what had been a stellar career in judo. It was going to be his last major competition. The scent of unfinished business floated in the air.

The event, one of the sport’s biggest competitions, was going to allow Dos Santos to draw the curtain on a career that had spanned across 15 years. Closure was just a fingertip away. Yet, as the final preparations for his last foray into elite-level judo took place, the chance to go out on his own terms — and with a bang — somehow managed to slip from his grasp.

“I was preparing for the Commonwealth Games last year, and I was in a training camp in Spain,” Dos Santos recalled to Combat Press. “I was just doing a sparring round with a guy from Ukraine and he sorta tangled up my leg and I tried to zig and he tried to zag and it sorta went ‘pop.’

“I didn’t know the specifics of how bad it was, and I’ve never really had a history of knee injuries. I knew it was bad because it hurt a lot and that was something different for me. Once I eventually found out the extent of it, I was pretty shattered. I set for myself that the Commonwealth Games would be my retirement from judo, and I’d pretty much trained flat out for 18 months to try and win a gold medal and then, two weeks out, it was all taken away.”

“It feels pretty good now,” Dos Santos continued. “I’ve felt like I have recovered for a little while, but I’ve had to be a bit careful and make sure that everything was absolutely signed off and whatnot. It was a pretty big relief when the surgeon said I’ve done a really good job [with rehab] and it’s all fixed — it’s really exciting.”

It’s hard to say what could have happened had Dos Santos not moved his leg the way that he did in that sparring session. There is no doubt that he would have been representing Australia in judo at the Commonwealth Games, but, after that, things could have been different. And if he hadn’t been sitting on the sidelines for so long, he may not have come up with his plans for the future.

“I’ve opened up my own academy, which is called Senshi Academy,” Dos Santos explained. “Senshi in Japanese [and] means ‘warrior.’ I’ve been a coach since I was 17 in some way, shape or form and I’ve been running my own judo program at Evolve MMA for about four years now and that’s grown quite well. There, we built the biggest judo club in Victoria in terms of membership.

“With the time off from my knee injury, I had time to sit back and reflect and not be an athlete for a while, and I had to think about what I was going to do with myself. And I decided that if I am going to make something of this and live my dream, I’ve gotta put some things in place. So, I started saving up every cent that I’ve got and I’ve now started to get things started. I’ve got my building signed up, and we’re hopefully going to be opening in about a month or so.

“I’ve got a business partner who has come on board with me. He runs a jiu-jitsu school in the area, so we are going to share the facility. So, we’ll have Phil Grapsas, who is a black belt under Pedro Sauer, running the jiu-jitsu program. We’ll have a pro MMA program and myself doing the judo program.

“The big thing about me being able to commit my time to training MMA is that I will be in Melbourne 100 percent of the time. When I was on the judo circuit, I was traveling eight or nine months of the year and there was no way I’d be able to run a business at the same time as that. Now that I’m at home, all I’ve gotta do is put in my two training sessions a day and make sure the business runs around that. It’s hard, but I’m not the sorta guy that sits around watching DVDs all day or anything like that. If I’m not doing something, I go a little stir crazy. So, I’m looking forward to keeping myself busy and the new challenges.”

A big part of what it means to be a coach is being able to help others reach their full potential. Dos Santos has been coaching in judo for well over 10 years. With his experience in taking athletes and pushing them to be the best that they can be, he has a knack for identifying judo players who could also make a run at mixed martial arts. That’s how he discovered the surging Kitt Campbell, who is poised to be one of the very first fighters in the professional fight team at Senshi Academy.

“I’ve had Kitt training under me since he was 16 years old when he first moved up from the country,” Dos Santos explained. “Back then, he wanted to do judo and have a fight some day, and now he’s a really good, quality MMA fighter. Over the last year, he has put his gi away and he doesn’t really do any judo at all now. He’s really committed to his striking now, and he’s started to establish himself as a top middleweight. I’m really enjoying working with him. He is doing really well at the moment.”

With the plans well underway to create his new academy, it begs the question of what comes next, in terms of competition, for an athlete like Dos Santos. The door to judo has been left ajar, so to speak, but there’s also the realm of MMA. Dos Santos, age 29, might be watching the years wind down on his prospects for making an impact in MMA, but those years certainly haven’t run out just yet — not by a long shot.

“I’ve been very, very careful to not make any plans, and everyone has been asking me what I am gonna do now,” Dos Santos revealed. “I’m sorta looking at it a bit differently. I’m still going to compete a little bit in judo — because obviously judo is my first love and I can’t just not do it anymore — but now I really wanna have a go at MMA. I’m going to try and take a couple of fights over the next couple of months and see where we go from that. I’ve never really been able to properly dedicate myself to MMA, so I wanna give it 12 to 18 months and see where I’m at after that.”

The path from judo to mixed martial arts is a well-traveled one, to say the least. Fellow Australian judoka Daniel Kelly has enjoyed a 2-0 stint inside the Octagon since being signed to the UFC on the back of his inclusion in The Ultimate Fighter: Nations. Watching such a close friend and mentor fighting on the biggest stage has given Dos Santos even more of a reason to want to successfully transition from judo. In his eyes, the sky’s the limit when it comes to skills crossing over.

“Dan is my coach and one of my best mates,” Dos Santos explained. “We were roommates when we went to the Olympic games. I saw what he went through, just getting his body right for judo at the age of 35, and then seeing that he has to spin that around 360 and commit to another sport — I see him four days a week and I see what he goes through — I sit there and I think that he’s a real inspirational kinda guy and I also think I’ve gone through every battle he’s gone through, so there’s no reason I can’t get to the same place. And I’ve got eight years on him, too.

“If things were to fall in line for me, then there is [no] reason I couldn’t do that myself. But, you can’t compare yourself to Daniel Kelly. He’s a whole other beast in every way. He may not look too flash[y] in some of his fights and this, that or the other, but he is the most competitive human being you’ll ever meet. And that goes for table tennis, judo, MMA, anything. He’s an absolute animal, and that’s why I don’t doubt he’ll succeed in MMA. Yeah, he got unstuck in that fight in the [TUF] house, but with that, the fight got away from him at the start and he never got a chance to recover. Any other fight you’ve ever seen him in — like his fight against Fabio Galeb years ago — he was well and truly outclassed and smaller than the guy and getting beat up, but he just dug deep and found a way to win. And that’s [because of] his years and years of hard judo training. I would be honored to stand side-by-side with him.”

Dos Santos hasn’t competed in an MMA bout since May 2013, when he suffered his first loss in the sport. Now that his judo aspirations have been put behind him, Dos Santos looks to what the future holds. Now, all that is left to do is wait and take each fight as it comes.

“I’ve got a couple of promoters trying to match me up,” Dos Santos revealed. “With me being 2-1, on paper, it would seem like a pretty easy match-up to find. But with my judo record means that, as soon as guys jump on Google, they tend to get cold feet fighting me. I’m not getting my hopes up, and that’s why I’ve asked a couple of different promoters to try and find me something. I don’t really wanna be chasing guys like Rob Lisita around, but they are the sorta names that get thrown at me [laughs]. I’ve never said no to any of them, but I’m not exactly in a hurry for that sort of fight. Hopefully, someone comes back to me relatively soon and has a good fight locked in because, now that I’m healthy, I just wanna get amongst it and test myself.”