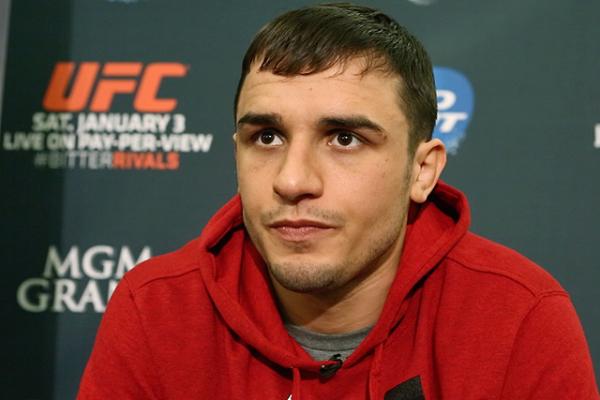 Was Myles Jury’s Move to Featherweight the Right Choice?

In a stacked lightweight division, a move down in weight might be the best idea for any fighter. In the case of Myles Jury, it’s a perfect choice.

Jury announced he would be moving down from the 155-pound division to try his luck at the featherweight level instead. The move might seem perplexing considering Jury is only 26 years old and very much still has a very bright future ahead of him if he had remained at lightweight. Heck, his lone loss came against current No. 1 contender Donald Cerrone.

Jury’s fight with Cerrone was anything but pretty for him, however. Cerrone was able to really pour it on against the young lightweight and was well in control of the fight from start to finish. It seemed as if Jury would ultimately be forced back to the drawing board and continue as a prospect at lightweight instead of immediately jumping into title contention like he would have done if he came away with a win over Cerrone.

It’s weird that after a loss like that one — a first official career defeat at the hands of a top veteran — a fighter would move down in weight instead of trying to rebuild some steam in his current division. Now, on top of having a whole new class of fighters to go against, Jury is adding in the weight-cut aspect that could end up being detrimental to his chances. That alone should be enough to cause concern as to whether Jury can really duplicate his lightweight success at a lower weight class. Will he retain the same qualities that led him to 15 victories as a lightweight? We won’t know until he steps into the Octagon as a featherweight. Some fighters don’t fare so well when shedding even a mere 10 extra pounds.

The big picture here is that Jury could have still succeeded at the lightweight level if he was patient. He posted a spotless record before meeting Cerrone, a fighter who has spent years causing headaches for the likes of Jamie Varner, Charles Oliveira, Edson Barboza, Jim Miller, Eddie Alvarez and Benson Henderson. It seems a bit too early to really go down in weight to try to find success after only losing to one of the toughest opponents anyone can ask for in the lightweight division. The good thing for Jury is his age. He’s still young and there is always room to go back up in weight if he gets to the point where cutting the extra weight seems to be too much.

There is a silver lining here.

Sure, Jury left a crowded division, but he is going to one that is a lot more wide open. At lightweight, there’s a new champion in Rafael dos Anjos, which means that the whole line opens back up since, well, he hasn’t really gone through any of the many contenders yet. Lightweight is immensely logjammed with challengers for the title.

Jury heads down to a featherweight division where the best featherweight ever reigns as king. Champion José Aldo has run through much of the division already. Outside of interim champion Conor McGregor, all that is left is a number of rematches with people Aldo has beaten once or even twice. Granted, this scenario could change if McGregor tops Aldo in their upcoming fight, but if Aldo remains the champ, he’ll have a very short list of potential new challengers. By going down in weight after his mostly successful career at lightweight, Jury already throws himself into the conceivable mix of possible contenders if Aldo gets past McGregor.

Jury is already jumping into the featherweight waters against some relatively good competition. His first task is a fight against the aforementioned Charles Oliveira. Oliveira is a guy who has fought the best of the division, including Frankie Edgar, Cub Swanson and Max Holloway.

In his first fight at a new weight class, the big picture for Jury is already established. The featherweight division offers a quicker route to a title and and a quick way back to fighting against the best competition available. Jury’s departure from lightweight might seem premature, and he’s sure to face his struggles at 145 pounds, but the young fighter’s future at featherweight looks bright.