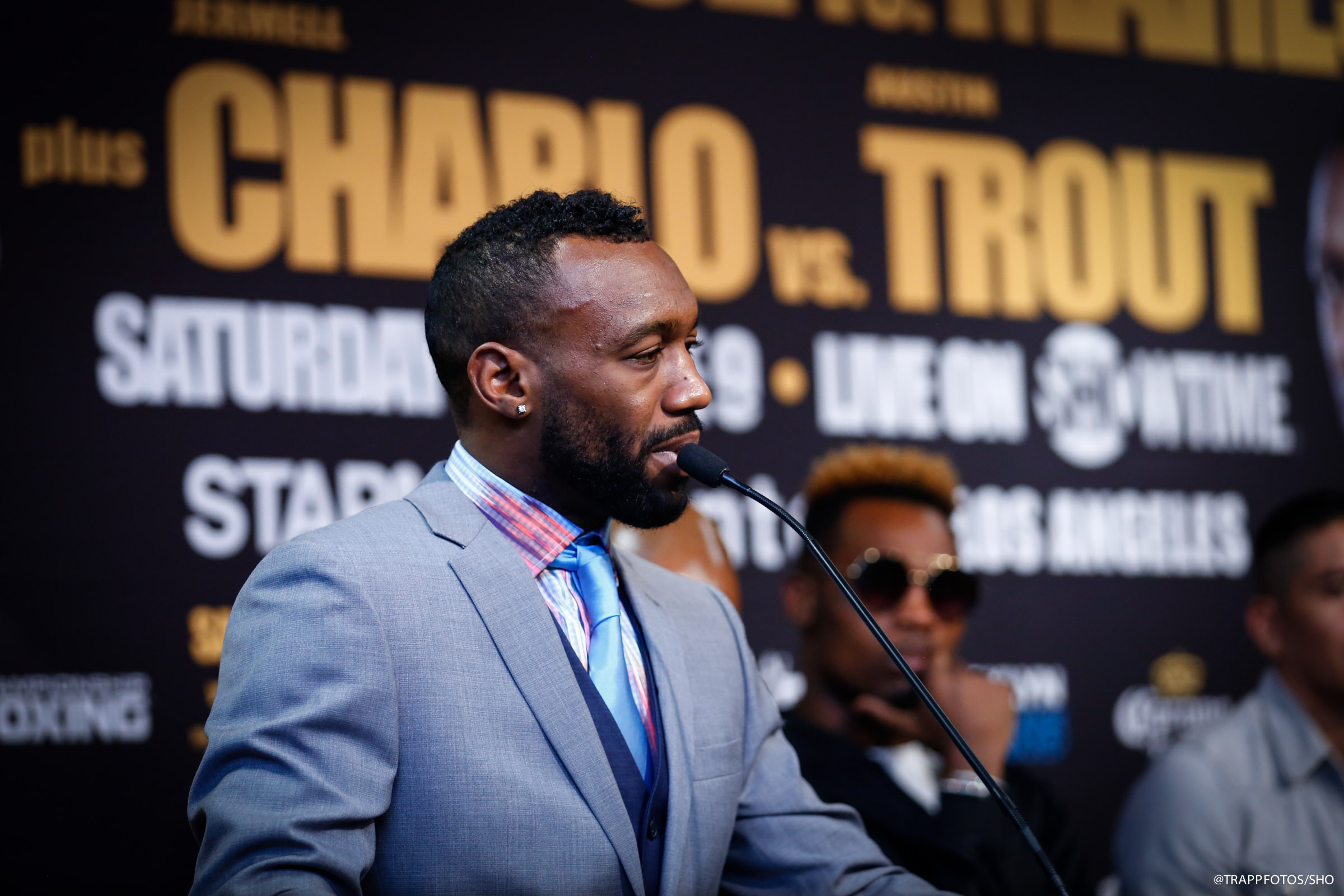 Let’s put some respect on Austin Trout’s name. The former WBA super welterweight champion, with four defenses to his name — including one over Puerto Rican standout Miguel Cotto — is a consummate professional who has fought the best and has competed at a very high level for a decade now. However, it’s not that easy to just tell people to respect a former champion. Ahead of tomorrow’s contest with WBC titleholder Jermell Charlo, Trout isn’t feeling the love he believes he deserves from many out there, in and out of the boxing scene.

“They’re quick to dismiss you and really talk shit about your craft,” Trout told Combat Press. “Something I’ve been putting in my heart and soul for like 22 years of my life, and for somebody who’s never thrown a punch in their life to come out saying you’re a bum, [it] infuriates me to where I want to find that dude and beat their asses. Like, you can’t do that.

“And how dare they disrespect me in that manner, where I’m competing at the highest level? I’ve fought the best — I’m fighting the best — where these bums can’t even get a promotion to the highest level of their job, wherever that may be. This is frustration at its finest. And the respect I’m trying to gain and trying to earn, and it’s probably something I’ll never achieve. It’s not that I’m looking for validation from anybody. The only validation I need is from Yahusha. At the same time, I want my respect. Don’t disrespect me. I’m doing something that you only can dream of.”

That’s the epidemic fighters live in now, in the days of social media. Twitter has given anyone the means to log on and insult a fighter without any consequences. Did you just put your heart and soul into a fighting camp only to come up short in a fight? Well, expect the keyboard warriors to come out with comments like about how you “suck” or that you’re “washed up and can’t fight.” Those are the mild comments, too. They can become more vile and even downright insulting.

It isn’t just the fans who reach out with this behavior. Many boxers know the perils of those close around them who disappear when the going isn’t good, when the belt isn’t wrapped around their waist and the paychecks aren’t coming in quite the way they once were.

“Yeah. And it’s a blessing too, because you don’t want those people to be around in your life anyways,” said Trout. “I was 26-0 when I took my first loss to arguably the best fighter in the game, Canelo Alvarez, and even after that loss, I’m still being wrote off — like, yo, I’m 26-1 now. When I took some of these losses, people showed their colors. But I keep my circle small. I go alone. I go to these press conferences pretty much alone. It’s how I feel it should be, because when I’m in that ring, I’m alone. When I win, yeah, people are gonna be around and be happy, but at the end of the day, I’m always gonna be alone. I came into this world alone [and] I’m gonna die alone, so I might as well have my success and my failures alone.

“And when I say alone, of course I mean my family, my kids, my mom, my wife — they gonna be with me — but that’s it. I have a good family that supports me. My kids love me, whether I’m champion or a journeyman. And knowing that is great, because it’s something to fall back on. I feel like the reward of life is love. And without boxing, I’m still very loved. That’s a great blessing to have, for real.”

Whether he will ever gain respect inside the ring, only time will tell. However, what Trout is doing outside of the ring should not be easily dismissed. He’s an advocate for a better future, a healthier one and a safer one in a dangerous sport. It began two years ago when Trout met on Capitol Hill with other members of combat sports to try to ensure the sport moves forwards in a safer manner. Trout has his brain scanned each year to make sure he’s still safe enough to compete. With his backing and the backing of others in the sport, changes were made. The Nevada State Athletic Commission finally required fighters to undergo brain testing before each fight.

“You saw how a lot of these football players, they losing their minds,” said Trout. “And you see them snapping and murdering themselves or others, and you find out it’s due to all the concussions they took and it also comes out that people knew about it but didn’t care. I thought that was bogus. I’d hate to snap and hurt myself or my loved one, and I knew something has to be done. So when [boxing manager] Al Haymon gave me the opportunity, I was all for it. Not only will it help the future, but it will help myself too. The results that I’ve seen — and we do yearly — and I think it’s my third year going and, like, I’m good. My mind is good. It’s a good tool for me to use that I can gauge where I am in my career.

“Every time I’m worrisome, every time we take the test, because I don’t want to see the results start slipping. I remember Larry Holmes’ wife, when I was talking about it on Capitol Hill, and she said, ‘If you started slipping, would that be enough for you to quit?’ And I said, ‘You know, probably not, but it definitely would weigh very heavy, and my family [and] my coaches can use that as a tool to convince me that, hey, it’s time to hang it up.’ And their opinions would weigh very heavy on my decision as well.”

As of right now, Trout is healthy. When he’s in that ring tomorrow with Charlo, he’s out to prove he’s still one of the best. Ultimately, he just wants respect.