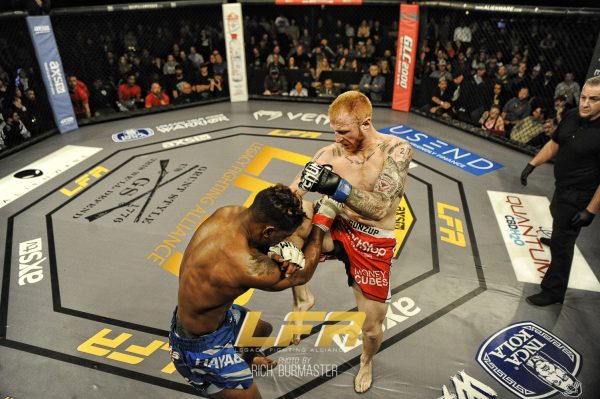 Upon hearing Kyle Stewart’s nickname “Gunz Up,” the first reaction is often, “What the hell does that mean?” However, to understand the man, we need to back up a bit.

Within every branch of the U.S. military, there are strong ties and a common brotherhood. They recognize each other’s lingo, the tattoos, the jewelry, and how they carry themselves. This was very much a family affair for Stewart.

Stewart did three combat deployments to Afghanistan during his eight-year tenure in the Marines. However, military combat was not the only form of combat that interested him. Stewart had practiced karate from age five until he joined the military at age 18. While he was still enlisted, he got back into martial arts.

“I had my first 10 amateur fights when I was in the Marine Corps,” Stewart explained. “I trained out of Fight Club 29 with Mark Geletko in Twentynine Palms [California]. That’s where I got my feet wet in mixed martial arts. 2010 was when I started training. Fast forward to 2014, I got out of the Marine Corps, and I believe I went pro in 2015. So, I was about five years deep in training before I had my first pro fight. I got to 10-0 before I lost my last fight. It was my first loss of my pro career, but I’m ready to get back into the cage and get another win streak going.”

In 2014, Stewart, a native of Gilbert, Ariz., joined Arizona Combat Sports, which has served as home for his pro career. However, after the loss, which came to former University of Nebraska wrestler and MMA Lab fighter James Nakashima at Legacy Fighting Alliance 46 in July, Stewart decided to make a change. About three months ago, his military career influenced his life in an unexpected way.

“I’ve always had a pretty good relationship with John Crouch,” Stewart said. “Even when I was coming up, fighting at Arizona Combat Sports, John Crouch was the head coach at the MMA Lab. And, coming up in the game, I knew who James was, and James knew who I was.

“It’s funny, because the Marine Corps actually ties us together. James’ older brother, Joey, is actually a Marine Corps sniper. At the end of our fight, I saw his hog’s tooth necklace around his neck. This is the respect you have in the Marine Corps, and I have a bunch of buddies who were snipers. So, I said something to him, and I was talking to John Crouch that night, just BSing. It was just good vibes.”

The Marine Corps is like that. It’s the little things — the attention to detail — that brings these guys together. So, it’s no surprise that the hog’s tooth, a sniper’s badge of honor, would end up changing another Marine’s life years later.

“Even before the fight, just training at other places, I knew that, where I want to go, I’m going to have to travel and train a lot more,” Stewart admitted. “So, at the time, I was planning on moving to Las Vegas, and I really thought about it. I was talking to [Joey], and he said, ‘I would really like to see you and James train together,’ and it clicked in my head that there was never any bad blood before, during or after the fight.

Stewart is back in action on Friday night at LFA 53, which airs live on AXS TV from the Comerica Theatre in Phoenix. He serves as the co-headliner along with his opponent, the 22-year-old Braden Smith.

“He’s a long-reach grappler,” Stewart said. “He hasn’t fought in a year or so. He’s a long, lengthy grappler. He’s a pretty decent kickboxer and has some knockouts. I don’t know, man. I don’t think he has the heart to be in there with me. I’ve seen him quit in his last MMA fight, and he fought a guy I beat in just over a minute — Chauncey Foxworth. I could just see him being uncomfortable, and if you are uncomfortable in there with that guy, you are going to be really uncomfortable with me.

“He’s young. I’ve seen some of the stuff he posted on social media about me being almost 30 years old and about me being desperate. I’m like, ‘OK, man. You can say want you want to try to build yourself up, but I’m telling you, when we’re in that cage together, I don’t think you’re going to want to be there.’”

Maybe it’s because Smith is young. Maybe it’s because he’s trying to go with the played-out Conor McGregor script. Maybe, Smith just didn’t do his research. After eight years of Marine Corps service, three deployments overseas, years of sitting on top of a tank with a machine gun, and a lifetime of martial arts training, the 29-year-old Stewart is not old. With only one pro loss, Stewart’s certainly not desperate, either.

“He can show up and be all-in and 100 miles an hour, but I’ve never quit and never come close to quitting,” Stewart said. “I saw him quit against Chauncey Foxworth. Practically, he’s good coming forward, if you let him be a bully, but I’ve never let anyone bully me in a cage. I feel like I’m going to beat him up on the feet. He’s going to get desperate, and he’s going to try to take me down. He’s not going to be able to take me down. I think a lot of people see that last fight with James and think they can take Kyle Stewart down. I’m actually really hard to take down. James has just really, really high-level wrestling.”

Stewart’s former foe and newfound training partner Nakashima spent his college career at one of the top wrestling programs in the country, so he will take pretty much anyone down. That’s what he did to Stewart in July. However, in Stewart’s previous 10 fights, the former Marine has finished seven opponents, most in the first round. He is a combat veteran in every sense of the word. On Friday night, “Gunz Up” will be locked, loaded and ready to show the world that he is one of the hottest up-and-coming welterweight prospects in the game.