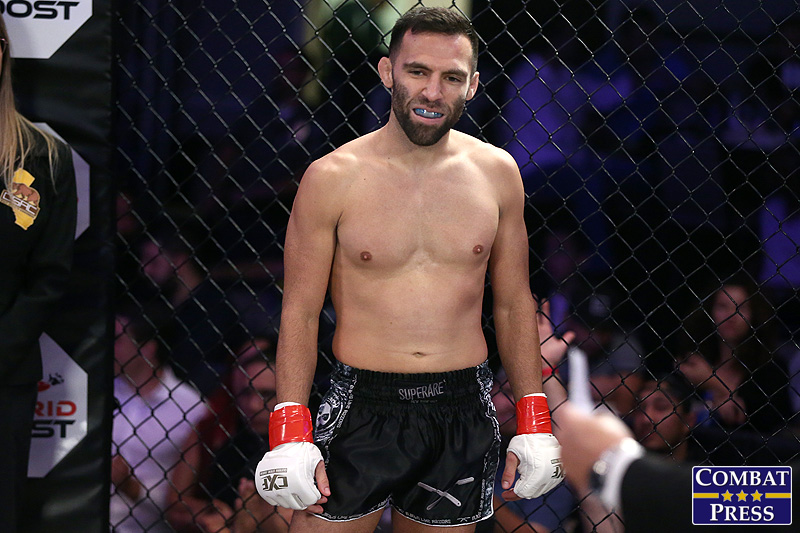 Every year, people flock from all over the world to the City of Angels with aspirations of becoming Hollywood stars. For most, it’s just a pipe dream, but for a select few, those dreams become realities.

Two of the most famous martial artists to strike gold in Hollywood were Chuck Norris and Bruce Lee. Born in March 1940, Norris was introduced to martial arts when he started training Tang Soo Do while stationed in South Korea in 1958 with the U.S. Air Force.

These two men were on different roads, but they each eventually created their own martial art and ended up becoming Hollywood stars due to their tremendous talents.

Norris and Lee are martial artists that became Hollywood talents, but what about the other way around? There is at least one example of a guy who went out west under the guise of future fame, only to become a talented fighter. His name is Kyle “The Hoosier” Estrada.

Estrada was born near Indianapolis. His family moved to Grapevine, Texas, when he was six, but he ended up back in Indiana right around the time the events of 9/11 unfolded. He was only 11 years old that fateful day. By the time he was 13, he started wrestling. While it was something he loved, he wasn’t very good at it back then. He wasn’t treated well by other kids, and after high school, he was ready to get out of Indiana. Film school sounded like a great excuse, so he floated the idea by his mom.

“She thought it was a good idea and I could do something with it,” Estrada told Combat Press. “It wasn’t what I wanted to do, but it was my excuse to get out of the small town I was in. I moved to Hollywood when I was 19, but I still wanted to wrestle while I was doing that. So, I found a club that eventually moved to an MMA gym.”

Estrada didn’t really expect to become a star of the silver screen. He just wanted to get out of the Midwest. While he “used to break under pressure” when wrestling as a youngster, he got really good after high school. When he started working out around fighters, they took notice.

“That MMA gym, obviously, had fighters that were getting ready for fights, and they knew that I had good wrestling,” Estrada said. “I would stick around at night and help the guys getting ready for their fights. From there, I just kind of got hooked on it.

“I left that gym and met — at a wrestling club in Santa Monica — Marcus Kowal. He took me to Black House gym to help him and Pedro Munhoz get ready for their fights. I think they were fighting for maybe [Resurrection Fighting Alliance] and something else. They wanted me to help them with their wrestling. I ended up staying there and became really good friends with Pedro. From there, I trained with Pedro until 2016, and then he left for American Top Team. That’s when I started getting real serious about it.”

Estrada made his pro debut in April 2015 under the BAMMA banner. In his first 28 months, he went 3-3. After a six-month break, he came back for his California XTREME Fighting debut and started a five-fight winning streak, which culminated in a Celtic Gladiator flyweight title win in May 2018. However, five months later, he lost his belt in a doctor’s stoppage against UFC veteran Louis Smolka. In June, he made his Legacy Fighting Alliance debut with a second-round TKO of Ricky Furar and followed it up with a win over Cody Freeman at LFA 73 in August.

“I didn’t realize how big Cody was until I got in the cage,” Estrada admitted. “Both of my LFA fights, I had two weeks’ notice. I didn’t even want to look at my opponent. I just wanted to focus on myself. When we got in the cage, I was like, ‘Jesus Christ, Cody’s huge!’ He had like a seven-inch reach advantage on me. The biggest thing I could take away from that is that I’m always going to be out-reached in these bantamweight fights, but it’s nice to know that I do a better job than most of dictating the range.”

Estrada’s next outing takes place on Friday night at LFA 78 in Belton, Texas, where he meets Adrian Yanez in the main event. Yanez, an LFA veteran and native Texan, is coming in on a two-fight winning streak. Yanez’s last LFA fight was a loss to Miles Johns for the bantamweight title. Yanez will have a slight height advantage and a four-inch reach advantage. This fight isn’t on short notice though. Estrada has had a seven-week camp.

“The most I’ve ever had [before] is four weeks, and that only happened twice,” Estrada said. “Most of my fights have been two to three weeks’ notice. I just go about doing the same thing I always do. I live this life, so I don’t have to get myself back in the gym and get back to work. I’m always at the gym. I just pick up the intensity a little bit.

Estrada, who now spends most of his time training at Saekson Muay Thai, Gracie Barra Northridge, and with his wrestling coach Kenny Johnson at Black House, has come a long way since moving to California a decade ago. His agent, who also happens to be his friend’s mom, still lines up occasional acting gigs for him, but his passion is MMA, and that’s what he sees as his focus moving forward. While he gets paid well enough as a personal trainer that he, frankly, does not need to fight or act, he has an internal drive to prove something.

“When I was young, I got picked on a lot, so I’ve always had this chip on my shoulder,” Estrada explained. “There was no reason to have a chip on my shoulder, but I always felt like I had to prove people wrong in Indiana, which is stupid, because, who cares? I think it’s the way I grew up. I’ve sacrificed everything, and here I am. I’m almost at the payoff.”

To some, being a Hollywood star would be one way to brush that chip off his shoulder. Not Estrada. He wants to prove that he is a better person than the bullies he grew up with, most of whom are probably sitting back in Indiana living boring lives. To him, there is a greater lesson to be learned.

“I’ll continue working hard and being honest and keep trying to help people that need things and opportunities,” Estrada said. “I want to do this for myself and my family, but I also want to help create opportunities for other people who need the help.”

Estrada doesn’t fight for money. He fights for something much bigger. Hollywood can keep the glamour. He’ll focus on the glory.