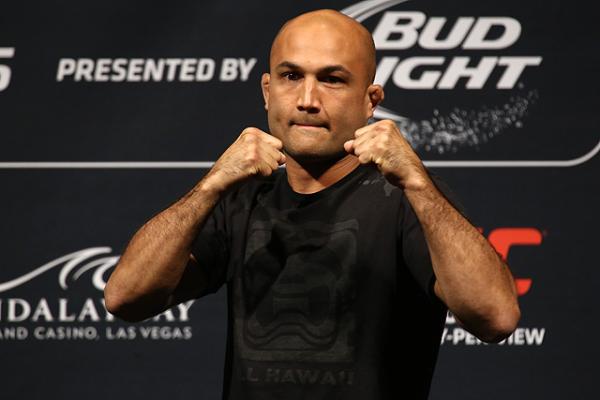 The Legend’s Last Chance: When Will B.J. Penn Hang Up His Gloves?

About 14 months ago, I penned an open letter to former UFC lightweight and welterweight champion B.J. Penn in which I asked that he hang up his gloves. The “Prodigy” was coming off a one-sided TKO loss against Frankie Edgar at The Ultimate Fighter 19 Finale in 2014, and it seemed like the time was right. Penn hadn’t won a fight since 2010 and many were wondering what he still had left to prove. Apparently, Penn didn’t read the letter.

In early 2017, the UFC decided to match Penn up with one of the most dangerous up-and-coming featherweights in the UFC today: Yair Rodriguez. The outcome? Another loss for Penn, this time at the hands of a young rising star.

Penn has now lost four of his last five bouts, with the other fight ending in a draw. He has been outclassed and outmatched in every one of his bouts while fighting across three different weight classes. Penn doesn’t want to give up, and it doesn’t look like the UFC is going to stop him. Just this past week, it was announced that Penn would be rebooked against Dennis Siver in a bout that was originally supposed to occur in June 2016 at UFC 199.

There is only one logical conclusion for why the UFC would rebook this fight. The organization wants to let Penn go out with a win.

Let’s be honest. Siver is not a pushover by any means. However, in the last few years, Siver has not been the original German wrecking machine that he was in his earlier UFC days. His last five bouts have resulted in one victory over short-notice replacement Charles Rosa, a trio of losses and a win over Manny Gamburyan that was overturned to a no-contest after Siver failed a drug test. His record isn’t as devastatingly bad as Penn’s mark over their last five outings, but he sure seems like a good pick for the UFC to line up with Penn in order to give the legend a chance at a victory.

Penn has done so much for the UFC. The man made his professional debut in the UFC. He was brash and cocky long before Conor McGregor was a household name. He won titles in multiple weight classes before anyone even considered that to be a plausible idea. Penn was a seemingly unstoppable force in a time where the smaller weight classes were overlooked in favor of the light heavyweight and heavyweight divisions.

Penn’s fight with Rodriguez after a lengthy layoff almost seemed like a punishment for the legend. Rodriguez was known to be the faster, flashier and obviously younger fighter. It was a way for the young gun to add the name of an all-time great to his resume, even if it is believed that Penn’s time has come and gone. For Penn, it was a chance to prove that he could still compete on the highest level.

Now, back to the current booking. Penn is scheduled to meet Siver on the UFC Fight Night 112 card in Oklahoma, but not till June. This means there is still time for looming injuries, rescheduled bouts and, on Penn’s part, some soul-searching. A Penn win surely would ensure that he could walk away from the sport with his head held high. It’s hard to say such things about a fighter who has done so much for the sport. At the same time, enough is enough.

So Mr. Penn, if you’re reading, keep this in mind. Too many fighters don’t know when to quit, but there is a difference between pride and being stubborn. One who is stubborn still feels they owe the fans and themselves something. Pride is knowing that you don’t owe anyone anything, but you do know when to walk away. Do you know when to walk away?