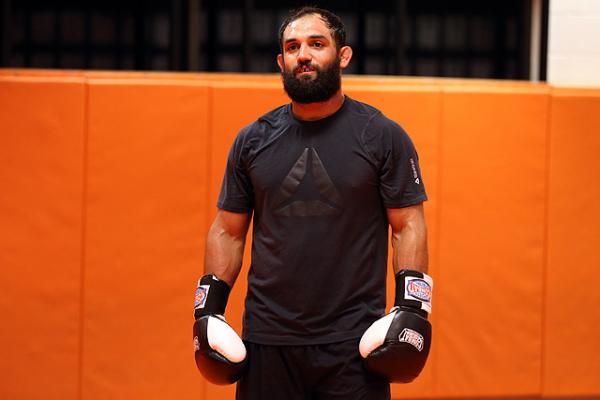 Johny Hendricks: Why Has the ‘Bigg Rigg’ Stalled?

As the saying goes, the only thing that’s harder than winning the title is defending the belt. However, if you’re Johny Hendricks, getting back to the mountain top may be an even harder feat.

In 2013, Hendricks was rising up the pound-for-pound rankings. After laying waste to virtually every challenger on his way to a title fight with Georges St-Pierre, Hendricks had the makings of a future superstar. He boasted some of the best amateur wrestling credentials in MMA and possessed truly soul-stealing punching power. Even after dropping a close decision to GSP, it seemed like only a matter of time before Hendricks would have a piece of UFC gold around his waist.

“Big Rigg” did eventually capture the world title in an all-time classic with Robbie Lawler at UFC 171. Instead of the fight becoming a hallmark of Hendricks’ title reign, though, it would become the proverbial beginning of the end.

The problems began in the bout with Lawler. While the action inside the cage was a beautiful display of violence between the two men, Hendricks nearly missed out on the opportunity to earn the UFC belt. With GSP dropping the title after stepping away from MMA, Hendricks and Lawler were given a chance to battle for the vacant welterweight title. Hendricks initially missed weight and questions began to arise surrounding his training methods. Still, Hendricks made weight on a second attempt and all was well.

The fight between Hendricks and Lawler was a hotly contested battle of wills. Hendricks had his hand raised, but it wasn’t without some serious setbacks. It was revealed Hendricks fought with a torn biceps, and the newly crowned champ was on the sidelines until December.

Lawler and Hendricks faced each other once again at UFC 181. The fight played out in a similar manner to their first encounter, but Hendricks slowed during the final rounds and Lawler took advantage and secured the victory.

Hendricks rebounded following the loss at UFC 181 in the sense that he picked up a victory over Matt Brown, but it did little to garner Hendricks support among the fanbase for another crack at the title. He would look to build on the Brown victory, but was instead defeated before even taking a step into the Octagon for his next bout.

Hendricks was scheduled to face Tyron Woodley in a title-eliminator bout, but he was removed from the card just days before the event. Hendricks was a victim of complications from an extreme weight cut that forced him from the title picture. He was given another chance at earning a welterweight title match when the UFC paired him with the ultra-talented Stephen Thompson. Hendricks avoided a setback on the scales, but he was systematically dismantled by Thompson in their encounter.

“Big Rigg” then faced the rising Kelvin Gastelum at the UFC’s mega event, UFC 200. On the biggest stage in MMA history, Hendricks missed weight for the contest. He was then outworked over the course of three rounds and dropped a unanimous decision to Gastelum.

Hendricks missed weight once again in what would be his final welterweight appearance when he squared off against Neil Magny.

In an effort to avoid further weight-cutting issues, Hendricks bumped up to middleweight. Despite being severely undersized in terms of height and reach, he seemed to be revitalized in his middleweight debut. It didn’t hurt that he faced a fellow former welterweight (and shorter middleweight) in Hector Lombard. Still, Hendricks looked the best he had in quite some time.

Similarly, Hendricks’ former opponent Gastelum seemed to be finding his groove at middleweight as well. Both had struggled to cut to welterweight and moved up to the 185-pound division. However, while Gastelum has managed to become one of the rising contenders in a crowded middleweight division, Hendricks’ middleweight run went well off the tracks.

Shockingly (or not, to some), Hendricks failed to make weight in just his second middleweight bout this past weekend. The former welterweight champion was then stopped in the second round by a vicious head kick from Tim Boetsch. Stunned, Hendricks rose to his feet, but Boetsch capped off the impressive finish with a flurry of uppercuts in close. The loss put Hendricks’ record at an uninspiring 2-4 since the loss to Lawler at UFC 181.

Hendricks’ fall from grace has been historically bad. It’s hard to think of former champions who’ve had this steep of a decline. While other champions may have faltered in the cage in the same way as Hendricks, many of them banked on the loyal support of MMA fans across the world. Hendricks’ litany of excuses, complaints and off-putting attitude alienated him from MMA fans. With no support from fans, there’s no desire to see Hendricks placed in another high-profile match-up. If there’s no reason for fans to tune in for a Hendricks fight, the UFC will likely feel less inclined to keep the struggling fighter on the roster.

There’s no way to know what’s going on in the world of Hendricks. For all we know, he could be going through some personal troubles which have led to issues in training camp. His startup restaurant failed. He has changed camps since his run to the top. There’s also the USADA angle that some will point to. Or perhaps his heart and mind simply aren’t in the sport anymore. Any of these reasons would be a valid explanation for his swift decline. However, until we hear Hendricks come out and say what’s going on, MMA fans will be left to wonder how the “Big Rigg” went off the road so quickly.