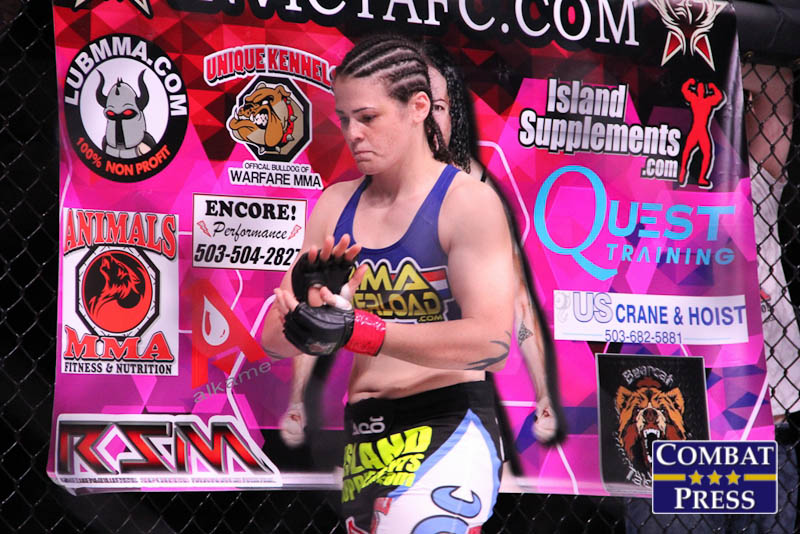 Amanda Bell: Back in the Win Column After Bellator 233

An athlete’s ability to be exciting is not as much a gift as it is an innate quality. Mixed martial artists who possess this quality may not always have the best records, but they are definitely the ones who sell the most tickets.

Amanda Bell, a 31-year-old Bellator featherweight, may have a 7-6 record on paper, but she has only gone to a decision in two of her 13 fights. She lives and dies by the sword. This is the quality fans seek in a fighter, but it’s also one she was not able to exercise her whole life.

“I never really got to be an athlete as a kid,” Bell told Combat Press. “When I got older, I started finding my own way in athletics. I became a martial artist as a teenager, and it just snowballed from there. I was an amateur for about four or five years. Then I started my career in Southern Oregon. I just traveled around ever since. I’ve fought in Invicta. I’ve fought all across the [United States] and in Canada. It’s come full circle all over the place, and now I’m in Bellator.”

Bell’s pro career kicked off in 2013 with two losses. However, those losses were to two very talented fighters — Tamikka Brents and Charmaine Tweet. She quickly got on the right side of things with three finishes in a row, all in the first or second round. It’s been a roller coaster of ups and downs ever since.

Bell joined Bellator in 2017 and has now had five fights under the Bellator banner. In July, she faced Arlene Blencowe at Bellator 224, where she was knocked out in 22 seconds.

“It was really difficult, because I felt like the areas where I’d really improved, I wasn’t able to display that night,” Bell said. “I literally didn’t even get to fight, so I just had to go back to the drawing board to see where I messed that up. It is what it is.”

Bell, who has spent the last six to seven years training at Animals MMA with Enoch Wilson and the last two years at Industrial Strength with Tony Gracia, thought some cross-training might help. She recently started spending more time in Spokane, Wash., training at Warrior Camp with Pablo Alfonso.

“My manager, Jason Ellis, he manages one of their guys, Daniel Swain,” Bell explained. “So he’s known Pablo for several years. He’s been working closely with the guys from Warrior Camp. He suggested I go out there and train. I’ve been cross-training and going other places before, and he felt this would be a good place to go and be closer to home. There have been a lot of life changes and things that have made me kind of lose my connection to Oregon. I just needed to go more out of my comfort zone than anything.”

When Bellator came calling again for a bout against Janay Harding on Nov. 8, Bell had about five and a half weeks to train for the contest. She spent about four of those weeks at Warrior Camp. With about 16 minutes left in the fight at Bellator 233, Bell scored a TKO finish of Harding to get her record above .500 again.

“I think I spent so much time focusing on my wrestling and my ground that I lost focus on my hands,” Bell admitted. “I think we also focused a little too much on it for this fight, so it’s kind of forced me to clean things up. I needed to keep my guard up and my chin down, and I needed to keep my head moving. I just need to get back to the old school with my boxing and things.”

Bell and her partner, Dunya, are now trying to figure out this relocation thing. They live a pretty great life on a vineyard now, and they also get to spend time on her coach’s farm as well. Bell works part-time doing security, and she has a horse with some family friends. However, despite these ties, the move out to Spokane is a business decision. She’s already an exciting fighter who brings a lot for the fans, but she needs to get some winning momentum going.

“After the move, we’ll get the holidays out of the way,” Bell said. “The faster I can get back in the gym, I’ll just keep working.”

Bell has a lot of fighting ahead of her still. She’s come a long way since her pre-teen years in Oakland, Calif., and the best is yet to come.