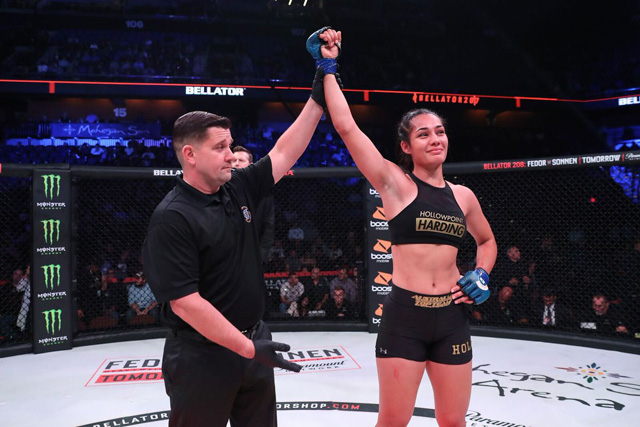 This weekend, we had two female bouts I focused on. One went pretty much as I expected as far as game plans, whereas the other went as far from what I expected as possible. Yan Xiaonan defeated Claudia Gadelha via unanimous decision at UFC on ESPN+ 40, and Janay Harding did the same against Jessy Miele at Bellator 251. So that we can make sure to end with me looking smart, let’s first look at the one where I was as far off as I could be.

My theory was that Harding was going to want to keep it in the center of the cage, use her boxing, and avoid clinches and the ground, whereas Miele would look for the clinch and be fine with it going to the ground. However, in any preview of a fight, we never for sure know what someone is going to do. We are basically assuming. Even when I have a fight, I study my opponent, I watch video, my coaches watch video, and we make an assumption on what her game plan will be. Meanwhile, my opponent will do the same for me. Sometimes, they might spend camp working on ways to fight opposite of what I might expect, so they can throw me off and catch me off guard. Harding seems to have done that here with Miele.

While Harding is probably the better natural boxer, she made it clear from the start that she wanted to work a clinch game and even get it to the ground. What was most impressive was how good she was in that clinch. She was able to put Miele’s back to the cage, and she was able to use very good head placement and land strikes. Head placement in the clinch is so important. When you put your head in a position where it can move your opponent’s head to the side or up and have her looking away from you, then it limits what she is able to do. In simple terms, Harding took the fight to where Miele was expected to have the advantage, and most likely Miele had expectations of that and was caught totally off guard, which then caused her to have trouble responding.

This is not to say Miele didn’t do anything. She had moments when she was able to reverse and put Harding’s back to the cage. However, Harding was able to respond every time. Even on the ground, Harding had some success, but that was risky, because Miele is overall the better fighter on the mat. Harding did well, though, to make sure she landed in good positions and didn’t take big risks. At one point, Miele did do a really nice job off her back looking for a choke and also had an interesting position where she had double underhooks with Harding’s arms trapped behind her back. This position put stress on the neck and back of Harding, but the problem was that there was no real submission there. What Miele might have done differently is to try to elevate and use it as a sweep to end up on top, but that is easy to say in hindsight. Miele showed the toughness she always shows, but it was an easy fight to score in favor of Harding.

What’s next for Harding? Maybe Talita Nogueira? Nogueira, who is another great grappler, has also beaten Miele. This pairing would possibly be a really good style clash where the winner could move up in the rankings.

Now, here is a fight where each fighter knew what they needed to do. As a fan, you could probably figure out each fighter’s game plan. Gadelha could engage a little standing, but mainly her best path to a win was to get it to the ground and use her ground-and-pound. Xiaonan, the aggressive hard-hitting striker, would want it on the feet.

In round one, Gadelha got to work on her game plan right away. She quickly scored the takedown and looked to be in a good spot. She landed some good strikes — not a ton, but what she landed was good. Gadelha looked for space to be able to land her strikes, but that space allowed Xiaonan to also land some really nice strikes off her back, something Gadelha may not have been ready for and that many felt gave Xiaonan the round even though she spent most of it on her back.

After that first round, though, it was all Xiaonan. She landed more strikes, kept being aggressive, didn’t allow Gadelha a chance to really get off, and did all this while maintaining a safe distance to avoid letting Gadelha get a clinch or anything that could lead to a takedown. Xiaonan also smartly limited the use of her kicks. She could have possibly thrown and landed more than she did, but she didn’t want Gadelha to catch one and get the takedown.

As the fight wore on, Gadelha was clearly getting tired, which also limited her ability to shoot or do anything big. Xiaonan picked up on this and upped her aggression even more. Gadelha did land an occasional nice punch, but Xiaonan landed more. What Gadelha might have liked to do is to come forward, landing a combo and using it to set up the takedown. The problem she faced any time she appeared to start going forward was that she got lit up by Xiaonan.

Sometimes I like to give an idea of what a fighter could have done differently, but I don’t see anything Gadelha really could have changed in her approach. She was just beaten by the better fighter that night. Xiaonan made people aware of what some of us already knew: she is a legit and serious contender to the strawweight title.

What’s next for Xiaonan? Some people on social media seemed to indicate she should get a title shot at Weili Zhang if Zhang doesn’t fight Rose Namajunas soon. I’d wait on this, though. I would like to see Xiaonan get one more big-name win to make a title fight more marketable and a bigger deal amongst fans. Joanna Jędrzejczyk would make a lot of sense and pair with Xiaonan for a potential “Fight of the Year” candidate. If Xiaonan could get past Jędrzejczyk, then she’d clearly be worthy of a title shot.