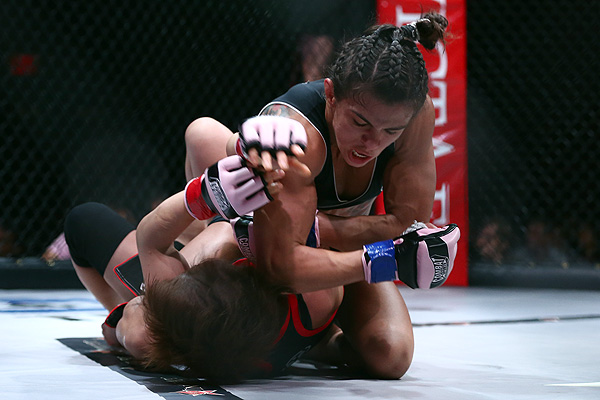 Last week, forces kept us from seeing some of the fights we were expecting. Let’s hope for better luck this time. We have two fights to focus on for this weekend. On Thursday, Janay Harding faces off with Jessy Miele at Bellator 251. Then, on Saturday, UFC on ESPN+ 40 gives us an exciting bout with Yan Xiaonan facing Claudia Gadelha. Let’s dig in, starting with Harding and Miele.

Harding comes into this one on a bit of a slide, having dropped her last three fights. Two of those contests were actually boxing matches sandwiched around a loss to Amanda Bell in the Bellator cage.

There’s no secret to what Harding wants to do. She prefers to stand and make it a kickboxing match. Harding is a good boxer and comes from a karate background. She uses very good technique and footwork, and those will be key here, as Miele might look to make it more of an ugly slugfest. Harding also really sets up her kicks well, and she can do so in two different ways. She can kick low and try to get Miele to drop her hands for punches, or she can punch low and get Miele to again drop her hands to set up high kicks. So, I think we might see her really make an effort to mix up the strikes, keep Miele guessing, and try to land the big one.

One thing Harding does that she can’t afford here is that she will sometimes start coming forward and then only half commit or not throw at all. That can get her in big trouble. Miele is someone who is much better when she is coming forward, and if Harding comes in and then pauses or doesn’t commit, she is almost a standing target for someone like Miele. I would like to see Harding come forward, land combos, end a number of them with kicks, and then use that footwork, move around, and get out of there before Miele can return. Harding should avoid brawls or clinches. As the fight wears on, she could maybe even frustrate Miele and therefore have even more openings.

Miele comes into this one after her first loss in four years. The setback came to Julia Budd, but obviously there’s no shame in that. In fact, Miele performed better than many expected.

Miele is not going to outbox Harding, but she can outpounch Harding. Like Harding, Miele sets her kicks up nicely. They can be a big weapon for her, because one way to outpunch Harding is to limit her movement by beating on her legs and slowing her down. Again, Miele is a better fighter when she can come forward, so she has to come forward here. She should expect to be hit, but in doing so, throw and throw often to try to lure Harding into a brawl. If Miele is backing up too often, then she is limiting her ability to do this and also making things easier on Harding.

Miele might also want to get the clinch, get it to the cage, and go to work. She has very good technique in the clinch, moves her hands the right way, gets underhooks, and lands some nice knees and punches. If she can get clinches and keep busy in those clinches, then she can narrow down Harding’s weapons — the kicks are gone, the movement is gone, the technique is gone. Takedowns can also be an option here if Miele wants them, but that’s something she’ll want to feel out at that time. Miele is tough. She can take a beating and keep coming forward, so she can have a bad first round and still be very much in the fight.

This bout was originally scheduled for six weeks ago, but it was moved because Gadelha was injured. The Brazilian is coming off a controversial split-decision win over Angela Hill. In fact, her last five outings have gone the distance. In this fight against Xiaonan, who also has gone the distance in her last five bouts, it seems logical to assume we might be in for three full rounds here. This will bring in the question of whether Gadelha has been able to train at a hundred percent while recovering from her injury. Even the most minor of injuries can affect training.

Gadelha has power and good stand-up overall, but my suspicion is that she will look for takedowns here and try not to get into too many exchanges with Xiaonan, who has very good striking. She’ll probably have to eat some punches upon entry, but I think the takedowns will be there. It will be hard for Gadelha to really gauge Xiaonan’s timing, so the Brazilian might want to stay on the outside and see if she can get Xiaonon to overextend on punches and then come in under those to get the takedowns. Or perhaps she’ll try to get the clinch and then go for the takedown from there. Gadelha is very strong, and I think can control the clinches. If she chooses to stand with Xiaonan more, then she can still have success. However, she won’t want to stay in front of her and engage in extended moments. If Gadelha can come forward with flurries and back up Xiaonan, then that will also perhaps make those shots more effective to get those takedowns.

Xiaonan hasn’t lost since 2010, which in and of itself is incredible. Sure, those pre-UFC opponents may not have been the most impressive, but any doubt of whether she’s legit has been erased with the 5-0 start to her UFC career.

Xiaonan is in some ways similar to a Nick Diaz. She’s not going to knock out an opponent with one punch, but she’s going to keep the pressure on and use accumulation to wear down and almost break her foe. This is going to be her plan of attack against Gadelha. She will do what she always does. There really isn’t any long explanation of what Xiaonan needs to do or what her game plan will look like. It’s pretty straightforward — advance, throw punches, don’t let Gadelha set, keep her moving backwards, and be prepared to sprawl. Xiaonan will mix up the strikes and add in kicks. If she can do this in round one and get Gadelha frustrated, then these things will work even more so in the following rounds when Gadelha becomes more desperate to try and come up with something. Conversely, if Xiaonan is unable to do this in round one, then further rounds might be bad for her. If Gadelha wins round one, then she takes the lead, and takedowns and a strong top game will let Gadelha grind out a win.