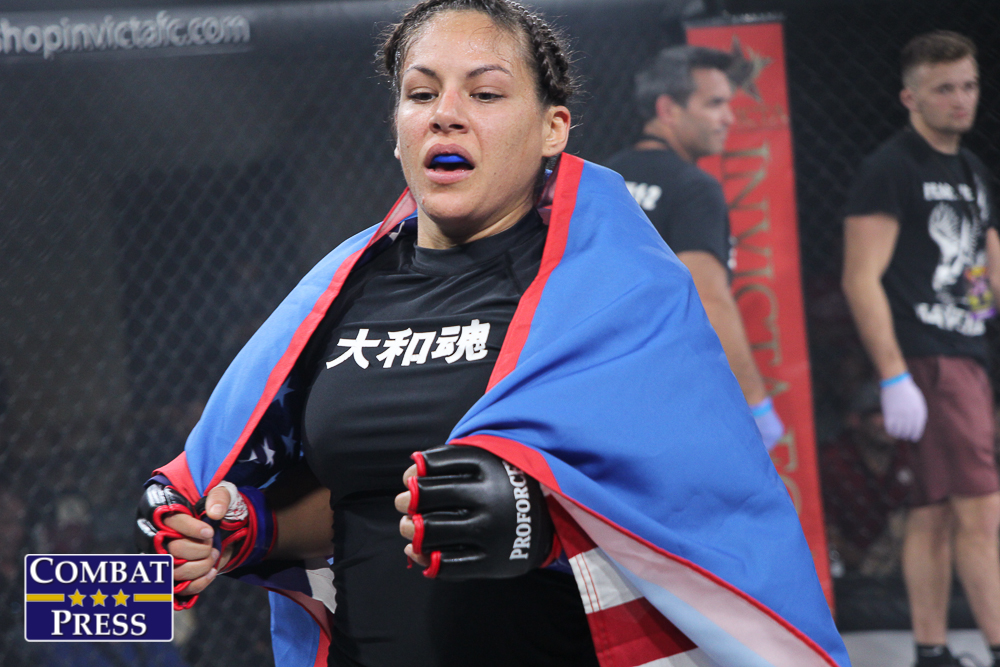 For the sixth time this year, Invicta Fighting Championships will stay in its Kansas City, Kan., home and play host to a dazzling night of fights. On Oct. 4, the Missouri-based promotion will showcase a night of exciting prospects and promotionally significant bouts.

Invicta mainstay Kay Hansen returns, alongside exciting prospects like Mariya Agipova and Lindsey VanZandt. The main event between former title challenger Pearl Gonzalez and undefeated prospect Brogan Sanchez is sure to be an entertaining headliner.

With the women’s flyweight division being as hot a commodity as ever, Invicta FC has decided to put the spotlight on the growing and established talents in the weight class. The first Phoenix Series one-night tournament served as the springboard for promising strawweight prospect Brianna Van Buren to win the tourney and beeline straight to the UFC.

Last month, Invicta FC president Shannon Knapp decided to do another Phoenix Series show, this time with the flyweights. Miranda Maverick fulfilled her dream of becoming a champion with three wins that night.

Now, the showdown between Gonzalez and Sanchez looks to be a top contender’s match.

Flyweight champ Vanessa Porto will defend her belt against Karina Rodriguez next month. Conventional wisdom would say that Maverick is next in line for the winner of that contest, but with so much talent present at flyweight right now, that is anything but a guarantee.

Gonzalez and Sanchez were not meant to be the Invicta FC 37 main event initially, but atomweight champion Jinh Yu Frey was forced out of her headlining spot against Ashley Cummins due to injury. This opened the door for the originally slated co-main event to get a bump up. This will be new territory for Sanchez, but it is nothing new for Gonzalez. The UFC veteran’s last outing against Porto was for the vacant flyweight crown. Gonzalez lost when the fight ended prematurely via an eye poke and the judges were called upon to render a technical decision.

Gonzalez was visibly emotional after the scorecards were read in unanimous favor for Porto. It was not a pleasing affair, but it could serve Gonzalez well here, seeing as this will be Sanchez’s first time in the limelight. Add in Gonzalez’s UFC tenure, and the big-show experience will surely lay with “The Chi-Town Princess.”

As far as fighting styles go, Gonzalez and Sanchez are very similar. Both ladies are aggressive, clinch-heavy, and comfortable on the mat. The difference between the two is that Sanchez seems more well rounded and confident in her abilities. A perfect record with six wins and no losses can do that to a fighter. However, given that Sanchez is 31, it’s a little harder to see her record getting to her head. She won’t become overconfident like many prospects do in their early 20s.

Sanchez is mild-mannered. Her confidence isn’t one of bravado. This is apparent in her fights. She’s always the one stepping forward, and there seems to be no switch in her brain that tells her it’s a bad idea, even if she’s struggling.

In her Invicta showings against Cheri Musaki and the aforementioned Maverick, Sanchez has had a rough first round. The Maverick fight was all the more impressive, because she went directly into the Missourian’s wheelhouse and got the better of the exchanges. Sanchez seems indomitable and never appears uncomfortable in any facet of a fight.

We have yet to see much of Sanchez’s striking, though. Her base is Muay Thai, and if there’s any doubt of how well-schooled she is, just take note of how vicious she is in the clinch. In terms of actual punches and kicks, they have been few and far between in Invicta. However, footage of her bouts from before she arrived in the Missouri-based promotion show that she was a wild and active striker. It’s these inklings of promise that have her as a victor here.

Gonzalez is a good fighter. She has improved vastly from her time in the UFC when she seemed like nothing more than an incompetent grappler. The loss to Porto could have reinvigorated her. She definitely seemed determined to right the ship, but “Killer Bee” could be too much too soon. This sounds odd since Gonzalez has more than twice the in-cage experience and is bound to cause some problems, especially early in the fight, for Sanchez. Yet, Sanchez has shown a level of gamesmanship that is rare even among professional prizefighters.

A loss is usually a learning experience for most fighters. Gonzalez doesn’t seem to shy away from a challenge, nor is she one to not address her flaws. However, the Porto loss was too much at once. The Brazilian put on a striking clinic and also won handily in the grappling department. There was no semblance of competition in that match, and to assume that eight months is enough time to fine-tune every aspect of one’s game is foolish.

The 10th Planet Jiu-Jitsu product will be competitive — Gonzalez is not one to go down easily — but Sanchez will make this ugly. She’s more aggressive than what Gonzalez is accustomed to and can come out on top whether on the feet or the ground. If Sanchez’s Muay Thai shows up in this fight, then prepare for a fun striking display. If it goes the way that most of her fights have been going lately, with heavy clinching and the fight going to the mat, then expect her patented mix of heavy elbows and knees, alongside her newly acquired Brazilian Jiu-Jitsu black belt, to keep her unbeaten record intact.