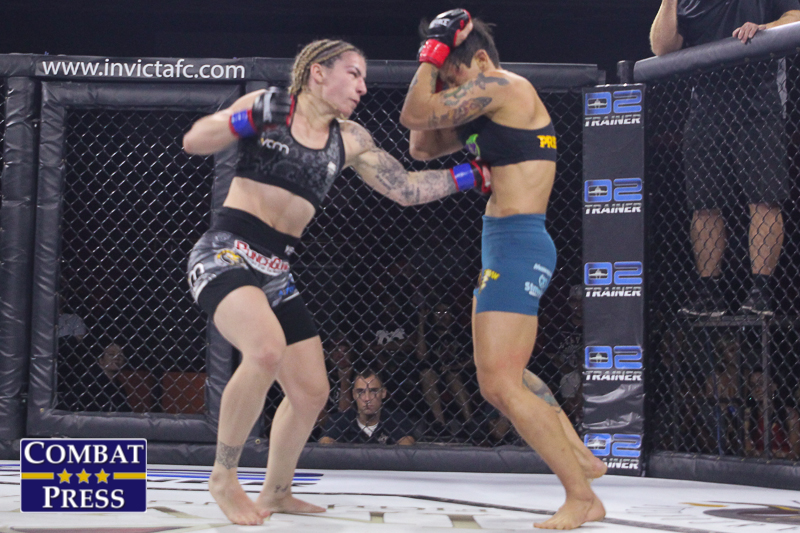 Thursday night fights. It’s a new habit for Invicta Fighting Championships, but it gives fight fans a small fix in the middle of the work week. On July 30, this fix consists of six bouts, capped off by a strawweight headliner, at Invicta FC 41.

The main event features Janaisa Morandin, a familiar face to Invicta fans. Morandin has shared the cage with several of the promotion’s better-known recent stars. Unfortunately, Morandin hasn’t found much success in doing so. The Brazilian fighter draws Montserrat Ruiz for this showdown. Ruiz scorched the regional competition in her native Mexico, but she’s now out to rebound from a loss in her Invicta debut against Danielle Taylor.

The lineup also features young up-and-comer Erin Blanchfield, who is out to further her flyweight title aspirations when she meets Brogan Sanchez in the evening’s co-headliner. Blanchfield is enjoying a two-fight winning streak since suffering her first and only pro loss. The 31-year-old Sanchez, meanwhile, needs a rebound victory after suffering her own first pro loss against Pearl Gonzalez in October 2019.

The remainder of the six-fight lineup includes such notable names as Kaitlin Young, Kelly D’Angelo and Caitlin Sammons.

Strawweight headliner Janaisa Morandin has had a tough ride under the Invicta banner, where she’s managed just one win through four appearances. Now, she’s set to face Montserrat Ruiz. Will Morandin finally have her hand raised again in victory?

Kontek: Morandin’s record with Invicta isn’t the prettiest, but look at who she has faced up to this point. She’s taken on a murderer’s row of talent, so the cage time she’s gotten is more valuable than the impact it has had on her record.

Two of her losses come to former champions and UFC fighters Livia Renata Souza and Virna Jandiroba. Her other setback was against Emily Ducote, who will likely fight for the vacant Invicta strawweight title a second time. Even in defeat, Morandin has gained valuable, top-level experience.

Ruiz is an exciting fighter, but her level of opposition has been sketchy at best. There isn’t a ton of good female talent in Mexico, so she is stepping up in competition by fighting Morandin.

Morandin has the edge in experience and skills, but Ruiz has the excitement factor to help this possibly become “Fight of the Night.” Morandin will get her hand raised here and save her job with the top women’s MMA promotion in the world.

Henderson: No argument here. The 25-year-old Morandin has had the bad fortune of fighting some of the best Invicta has had to offer at any given moment. Souza was a former champ when the pair met, and she used her decision nod over Morandin as a springboard to the UFC. Jandiroba won the title when she submitted Morandin and then she, too, departed for the big show. Ducote looks to be on a similar path. In a way, Morandin has become a top Invicta fighter and a gatekeeper between Invicta and the UFC.

Ruiz doesn’t appear to be a fighter who can crash through those gates. The Mexican upstart did win her first eight pro outings, but they came on the regional scene. Her toughest opponents were Annely Jimenez Garcia, who now holds a 10-5 mark while coming off a loss to a previously winless pro, and Sarai Saenz, who is now 2-2 while also coming off a loss to a fighter with a losing record. Once Ruiz did step up to fight tougher competition, she was handed a loss by Invicta’s Danielle Taylor.

Morandin might not find a finish against Ruiz, but she should do more than enough to earn the decision victory.

Brogan Sanchez is out to rebound from her first pro loss, which came last year against Pearl Gonzalez. How likely is she to find the win against Erin Blanchfield?

Henderson: Sanchez was riding high on a six-fight winning streak that included notable triumphs over Kate Da Silva, Cheri Muraski and Miranda Maverick prior to her encounter with Gonzalez. As has been the case throughout the 31-year-old’s career, the fight with Gonzalez went the distance. The difference was that Sanchez lost the verdict for the first time since launching her pro campaign five years earlier.

Gonzalez is a seasoned veteran, though. She even eclipses the aforementioned Da Silva due to strength of schedule. Gonzalez has shared the cage with the likes of Cortney Casey, Cynthia Calvillo, Poliana Botelho and Vanessa Porto. She’s capable of outpointing even a talented fighter like Sanchez over the course of three rounds.

The 21-year-old Blanchfield doesn’t have the veteran savvy of Gonzalez, but she’s been quite the wild card thus far in her young career. She managed a majority decision over fellow young up-and-comer Kay Hansen, who has since gone on to achieve success in the UFC. She barely lost to Tracy Cortez on the scorecards, and she recently demolished Victoria Leonardo with a head kick. She’s a very dangerous opponent for Sanchez, and she has something Sanchez seems to lack: finishing ability.

Sanchez could still squeak out a decision, but Blanchfield has more routes to victory and should play spoiler on Thursday night.

Kontek: This is going to be a close fight. Both women are very well rounded. Sanchez has the experience edge, while Blanchfield has the youth. Both ladies are tough as nails.

There really is no grappling edge. Sanchez is a good, strong grinder, while Blanchfield is likely the more savvy submission grappler. The striking edge is also a toss-up. Blanchfield has greatly improved, as seen in her knockout of Leonardo. Sanchez is a solid technician, but is not a knockout threat.

When the judges are called upon, there will be some contention on who did more to win. My guess is that the nod will go to Blanchfield, but it could really go either way.

Natalya Speece and Alexa Culp — do we need to know these names?

Kontek: I’ll be honest. Neither Speece nor Culp were on my radar as new prospects. Now that I have looked at their resumes and the tape, nothing has really changed.

Speece is 29 years old. That’s not old in general, but it is old for a person making their pro debut at this point in the sport. She has a Muay Thai background, but so do a large portion of female fighters. Speece isn’t a standout.

Culp, 20, has more promise because of her youth. She trains under James Krause and has plenty of time to improve her skills and build her resume. Even if she struggles early in her pro career, she has a long career ahead of her.

Henderson: It’s always tough to gauge rookies. Sometimes even a fighter who underwhelmed as an amateur can finally see everything click as a pro. In this case, we’re dealing with one youngster and another fighter who even had a serious gap in their ammy timeline.

Speece seemed to go back to the MMA drawing board after a 2016 ground-and-pound loss to Jennifer Penfield. She didn’t return until 2019, but that return came with four victories over the span of eight months. There’s a chance she could extend this success to her pro debut with Invicta, but it’s tough to say. Her wins at the amateur level came against a set of opponents who now hold a combined 3-7 record at the amateur level. There’s nothing here to suggest a breakout star.

Culp’s youth and strong camp are also backed by a 3-0 ammy run. She, too, hasn’t exactly fought any notable names, but she was able to dispose of her two most recent opponents via rear-naked choke submissions. Culp is definitely the more promising of these rookies, and she should demonstrate this with a tapout of Speece for a successful pro debut.

Henderson: Caitlin Sammons and Claire Guthrie. These two flyweights are extremely early in their respective careers, but they head into this match-up without a single blemish on their pro records. Sammons has already scored two finishes, and she could add to her highlight reel against Guthrie, whose record would be 1-1 if not for the fact that Phoenix Series tournament bouts counted only as exhibition fights.

Kontek: Thanks for stealing my sleeper match-up, bro! That is a fantastic fight. Meanwhile, my new sleeper pick is Kaitlin Young and Latoya Walker. Walker, who has been away for some time, has excellent boxing skills, and Young is a Muay Thai stylist. This could be a great striking match-up. The technical skills and accuracy of both ladies will make this a fight to watch.