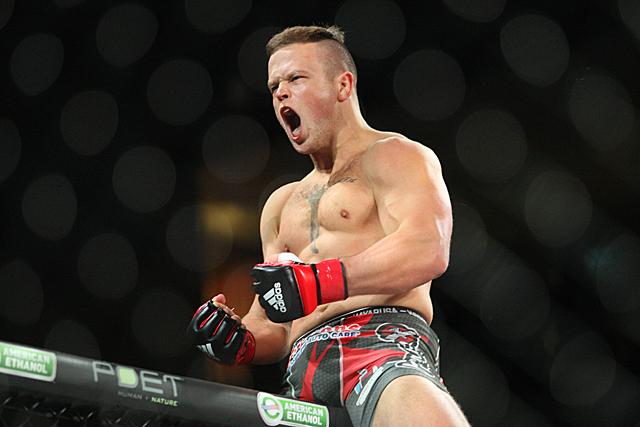 Perhaps more than any sports town in America, the city of Cleveland is known for the anguish of its teams and fans. The Cleveland Browns last won an NFL championship in 1964 and are on their 25th different starting quarterback since the franchise returned to the city in 1999. The Cleveland Indians haven’t won a World Series since 1948, with their last appearance coming in 1997. The Cleveland Cavaliers have never won an NBA title and are fighting for their championship lives for the second year in a row against the Golden State Warriors.

With so much heartbreak in Cleveland sports fandom, it would be easy to view Clevelanders as a jaded, cynical bunch. You may not be too far off either, if you ask Cleveland native and Resurrection Fighting Alliance fighter Joe Gigliotti.

“Cleveland sports misery is a real thing,” Gigliotti told Combat Press. “It’s hard to explain, but we’re very prideful in Ohio. We take our hometown and our sports very seriously. A lot of people in my family work blue-collar jobs, and you work and you grind through to get the things you want.”

Gigliotti, whose record sits at 7-0, wants to join his fellow Clevelander, UFC heavyweight champion Stipe Miocic, in helping to turn his hometown’s fortunes around. Gigliotti faces the 9-3 Daniel Vizcaya in a middleweight feature bout at RFA 39 on Friday, June 17, in Hammond, Ind.

“His reaction to winning the belt was awesome too,” Gigliotti said. “We have a lot of talent from Ohio — Jessica Eye, Cody Garbrandt, Matt Brown, Dominique Steele. It makes me want to get a win so bad.”

Gigliotti was originally supposed to debut for the RFA last year, but his bout was called off after he failed to make weight. Gigliotti badly wanted to fight and claimed he offered his opponent 50 percent of his fight purse.

“You owe it to your opponent to make weight,” Gigliotti said. “I was water loading, then de-loading, and my body just dried up. I didn’t want to push my health, but I also really wanted to fight. It’s miserable and it sucks, but I own up to it.”

Gigliotti ended up making his RFA debut in April and secured a guillotine-choke victory in just under a minute. He was very grateful to get another chance with the RFA.

“They realize and they develop talent and help them move on to UFC or Bellator,” Gigliotti said. “They’re very professional, and they have nice, cordial and friendly employees.”

Gigliotti even got to meet UFC President Dana White after his debut win for the RFA. White was in town filming his reality show, Looking For a Fight. Gigliotti said it was “surreal” to meet White, who congratulated Gigliotti on his victory and talked to him about the show. Gigliotti hopes his performance made an impression on White, and Gigliotti credits his success to his coach, Aaron Simpson, and his teammates at Power MMA in Arizona, where Gigliotti currently trains.

“My brother was in Arizona and invited me to come out,” Gigliotti said. “At Power MMA, there are guys like C.B. Dollaway and Ryan Bader and other guys with a wrestling background. I’ve wrestled since second grade, so it translated well and they really helped me transition to MMA.”

Gigliotti said Simpson and his Power MMA teammates “really go out of their way to help their teammates. It’s like a family. They have a good system with the correct training and preparation.

“They were in our spot once, and they’re very kind inside the cage and out.”

In order for Gigliotti to prepare for his bout against Vizcaya at RFA 39, he watched footage of Vizcaya’s previous fights.

“He’s tough, he has a longer reach and he’s durable,” Gigliotti said. “He throws crisp combos, and it’s going to be a tough fight. I’m ready to go five rounds.”

Gigliotti will have a little extra incentive when he faces Vizcaya. Many of his friends from Cleveland will travel to RFA 39 to watch him fight. Gigliotti hopes a victory on June 17 is the next step toward an opportunity at a world title in the UFC.

“If that’s not your goal, then you don’t belong here,” Gigliotti said. “I want to be remembered as a champion who had exciting fights, and be an example to others. If you invest your heart, mind and soul, then you can come out on top.”