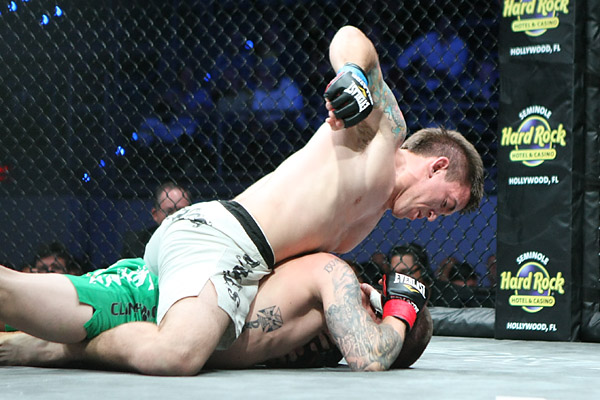 TKO Major League MMA is the first of a trio of events this weekend to air live on UFC Fight Pass and feature a notable prospect or two. In the case of TKO, the prospect is bantamweight titleholder Nathan Maness. The undefeated up-and-comer gets what should be a UFC audition when he puts his belt on the line against former UFCer Taylor Lapilus.

The well-rounded Maness blazed through 10 amateur opponents before transitioning to the professional ranks in 2013. Maness, now 27, duplicated his ammy run with a streak of 10 wins at the pro level. The Salvation MMA product kicked things off with a debut against 15-fight veteran Jeremy Pender and continued on with a stretch in which he topped four previously undefeated foes. More recently, he’s bumped up the level of competition with victories over the likes of Caio Machado and Jesse Arnett, the latter of which earned him the title belt. Maness has three finishes via strikes and two submissions.

Lapilus, also 27, has already had one chance with the UFC. Oddly, he did not stick with the organization despite posting a 3-1 mark. However, the reason had to do with the Frenchman’s decision to enter the boxing ring. “Double Impact” notched a unanimous decision in his lone appearance and then returned to MMA, this time with a small German promotion where he claimed an interim featherweight title and a bantamweight strap. He then suffered a loss to Denis Lavrentyev under the RCC banner. Lapilus made his TKO debut in December with a win over Josh Hill. Overall, he has six submission victories and two knockouts. He has never been stopped in a fight.

This is certainly a great chance for Maness to punch his ticket to the UFC. He’s not fighting some failed castoff from the promotion. Instead, he’s tasked with Lapilus, a man who won three of his four Octagon appearances. Lapilus suffered his only UFC loss to Erik Perez, but he also scored victories over Rocky Lee, Ulka Sasaki and Leandro Issa. Meanwhile, Maness has picked up his biggest victories over two prospects, including one who is now on a three-fight skid.

Maness was set to fight Lapilus in March, but an injury forced him out of that contest. Now, he gets another opportunity to tangle with the UFC veteran. Unfortunately, it might not go the way he would like it to go. Lapilus has been a tough out, and he’s even been difficult to top on the scorecards. His first loss came to Magomed Bibulatov, who now calls the UFC home. His second defeat came inside the UFC to Perez. Only his most recent setback came against an unheralded fighter, but Lavrentyev is making moves to change that with some strong wins of his own in RCC.

TKO fans are in for a very competitive fight that really could go either way. It’s difficult to bet against Lapilus, given his success on the biggest stage, but Maness has the power and length to give the Frenchman trouble. In the end, though, Lapilus should do enough to convince the judges of his superiority.

Just one week after a strong offering at its 74th show, Cage Fury Fighting Championships returns with its 75th event. This one isn’t quite as deep as the previous show in terms of key match-ups, but the women’s strawweight championship showdown between undefeated Miranda Granger and once-defeated Heloisa Azevedo gives us a glimpse at two of the division’s up-and-comers.

Granger is the blue-chipper of these two ladies. The Charlie’s Combat Club disciple torched five amateur opponents before making her pro turn in 2017. She continued her winning ways with a debut against Nikki Lowe that ended in a first-round armbar. The 27-year-old added another first-round submission finish when she met Ivana Coleman. From there, her level of competition went up, but “Danger” responded with stoppages of Jamie Thorton, Amy Montenegro and Jamie Colleen.

Azevedo is another great test for Granger. The 28-year-old Brazilian entered the pro ranks in 2017 with a loss to Duda Santana, who was then a rookie but is now headed to the UFC. “Mão de Pedra” can be forgiven for that loss, seeing as how it came at featherweight, far above the 125- and 115-pound limits Azevedo has regularly seen in her outings. Once she moved to a weight class that better suited her, she started destroying opponents. She has claimed four wins, all via stoppage, since the loss to Santana. Unfortunately, she has never fought an opponent with more than one pro fight under their belt.

The idea of two proven finishers squaring off in this contest is very appealing. However, their level of past competition is far different. Over her last three appearances, Washington state’s Granger has victimized a Legacy Fighting Alliance veteran, an Invicta FC and The Ultimate Fighter alum, and a two-time Dana White’s Tuesday Night Contender Series participant. Azevedo has toppled a rookie, a 1-0 adversary and a winless opponent.

Azevedo presents a true threat through her ability to stop an opponent with fists or grappling, but she’s going to have to get lucky with a punch or a huge mistake by Granger to have any hope in this one. Granger, despite only five pro bouts, already seems like an established veteran in the cage. If she could run circles around Thorton, Montenegro and Colleen, then Azevedo should be no trouble for her. Granger tends to go for the tapout, and she should find one in this affair.

The throne of featherweight King of Pancrase might not hold the same status as the Iron Throne from HBO’s The Game of Thrones, but the title mix is just as much of a mess as the happenings in Westeros. Andy Main won the crown in 2015, but he never defended the strap. In 2016, Issei Tamura captured the interim gold, but he turned around and lost it to Nazareno Malegarie in 2017. Malegarie was set to face Isao Kobayashi, but the champ sustained a knee injury and then ventured off to take part in the Professional Fighters League 2018 season. Meanwhile, Kobayashi captured another interim gold with a win over Koyomi Matsushima. This brings us to Pancrase 305, where Malegarie and Kobayashi will finally square off to decide on an undisputed champion.

In addition to his PFL stint in 2018, Malegarie is a Bellator veteran, a member of The Ultimate Fighter: Brazil 4 cast and a UFC veteran. He has struggled to find success on the biggest stage of his MMA career — he won just once in four Bellator appearances, fell to Fernando Bruno in the semifinals on TUF, dropped a split decision in his lone UFC fight against Joaquim Silva, and went just 1-1-1 in the PFL. The same cannot be said of his ventures into judo and Brazilian Jiu-Jitsu competition. The BJJ black belt won a world championship when he was a blue belt, and he is a two-time judo champion in Argentina. The 33-year-old, who made his professional MMA debut in 2007, has only suffered five official losses in his career, and they all came under either the UFC, Bellator or PFL banners. Malegarie has 17 submission wins, and his fists have accounted for an additional five victories. He is winless through his last two fights.

Kobayashi launched his pro career in 2008 as a 19-year-old. He won the 2009 Pancrase Neo-Blood lightweight tourney and the 2011 Pancrase Lightweight Grand Prix. The Sakaguchi Dojo product compiled a 15-1-4 record as a lightweight, capturing the lightweight King of Pancrase crown along the way, before a tumultuous run in the featherweight division. The southpaw’s first stint as a 145-pounder started off strong enough with a win over Takeshi Inoue, but Kobayashi stumbled against three of his next five opponents to bring his featherweight mark to a mediocre 3-3. The judoka rebounded with a split-decision victory over Yutaka Saito under the Vale Tudo Japan banner and then added two victories with Pancrase. The 30-year-old suffered another setback when he dropped a split verdict to Kyle Aguon, but he bounced back once more with a decision over Yusuke Kasuya and a first-round decimation of the aforementioned Matsushima to claim the crown.

Kobayashi tends to victimize his opponents with his fists en route to knockout and TKO victories. His career highlights include a victory over former ONE FC featherweight champion Koji Oishi, a draw against UFC veteran Jorge Patino, decision wins over Marlon Sandro and Will Chope, and his recent finish of Matsushima. He did suffer losses to Kazunori Yokota under the Deep banner and Goiti Yamauchi and Justin Lawrence in the Bellator cage, which demonstrates that he is vulnerable against high-level talent like Malegarie.

Kobayashi was a stud at lightweight, but he seems intent on remaining at featherweight. It hasn’t exactly gone well for him overall, but he is finding a groove now. He has won five of his last six fights, and the remaining contest was a close split decision. However, Malegarie is by far a more accomplished talent than any of those six recent opponents for Kobayashi. The Argentine fighter seems to have more trouble against wrestlers and grinders — guys like Daniel Straus, Rad Martinez and Andre Harrison. When tasked with a fighter who boasts more flashy striking, Malegarie has fared well. While it’s not a significant edge — this is another really close fight on paper — Malegarie should be considered the favorite to emerge with the victory. Kobayashi has been stopped a couple of times, and Malegarie’s submission game can be lethal.