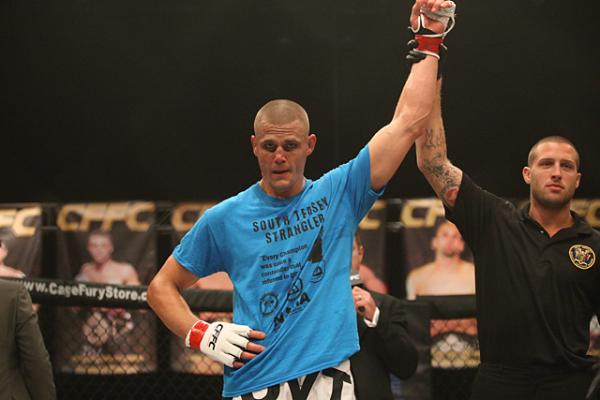 Performing at the highest physical level as a professional athlete is more than showing up to practice, putting in the necessary work, and keeping up on the strength and conditioning. Exercise breaks down muscles and pushes cardio, but where muscles grow and real athleticism happens is during the downtime.

It can be tough for athletes, especially the more focused ones, to handle downtime efficiently. Some sit around and play video games. Others go right back to their day job. Others party and get drunk.

Tim Williams, a veteran of The Ultimate Fighter 19, entered the TUF house with an 8-1 record in 2014. He beat Bojan Veličković to enter the house, but lost his quarterfinal fight to eventual finalist Dhiego Lima.

“It was a learning experience for sure,” Williams told Combat Press. “It was a little wild. It’s much different from a regular camp. You don’t have your coaches, training partners and regular schedule. All the things you’re used to being around aren’t there. It was definitely different, but I learned a lot, you know? It was the first time I had the opportunity to really train full-time.

“Today, I put aside a certain amount of time to do stretching, and I do recovery work. My mentality on the show was that nobody was going to outwork me. I would get out, run, do extra stuff, and push extra hard [in] training. It was breaking down my body, and I was an amateur in body maintenance.”

Nobody can ever doubt Williams’ work ethic. He is a full-time union carpenter who busts his ass to make a life for himself and his fiancé, Karen. However, with all the additional hard work he was doing to be the best possible fighter, Williams was missing half of the equation: recovery.

After his stint on TUF, Williams got right back into action. He won two in a row, which included the Cage Fury Fighting Championships middleweight title win that came via a unanimous decision over Ron Stallings. Williams’ only professional loss was to veteran Dustin Jacoby three years prior.

Williams appeared to be on the hunt for a UFC contract. However, he had back-to-back setbacks in which he was finished twice by veteran Anthony Smith in a five-month time frame.

“I had a couple losses to the same guy, and we changed around some things,” Williams explained. “I got a different striking coach. Not that my other one was bad, [but] he had moved away and he was in a position where he couldn’t coach me. I’ve learned some new stuff, as far as my striking, and we just kind of changed some things around. My strength and conditioning moved around a bit, and I’m just trying to keep it fresh.”

Last summer, after stringing together five wins in a row, Williams was back on track. His manager told him to stay ready, and, eventually, he got a short-notice call from the UFC. He was in line to face Rafael Natal at UFC on Fox 25. Unfortunately, he got bit by an all-too-familiar bug.

“I hurt my elbow and couldn’t take the fight,” Williams said. “I thought I was fucked and they were going to release me. They ended up keeping me, and I got another call about six weeks out. Here we are. We are in the UFC now.”

On Sunday night, Williams will finally get his UFC debut. He faces Oskar Piechota at UFC Fight Night 126 in Austin, Texas.

“I feel good, man,” said the New Jersey native. “It’s the UFC, man. You’re not going to scroll down the roster and find an easy ‘W.’ Everybody’s tough and everybody’s good. He’s good. He’s a really good [Brazilian Jiu-Jitsu] black belt. He’s got good striking and has some knockouts.

Working as a carpenter and accepting the reality that fighting does not exactly pay the bills for the majority of fighters, Williams has to be very tight with his time off of work for training.

“I took off about three weeks for this fight to diet, train more, and recover,” Williams said. “I’m going to have a total of about three to four weeks off for this fight. After this, I’m going to be able to put a little money aside. That way, in my next camp, I’ll have some more money to invest in my camp, so I can do four or five solid weeks.”

In his 18-fight professional career, Williams has gotten really in tune with his body. He now understands the importance of recovery time. Outside of his normal coaching crew, he’s enlisted a professional for his bodywork as well.

“I got a massage therapist that works with me two days a week to help me recover and work out kinks,” Williams said. “I tell him what’s wrong, and he works on me. He does the tape to get more blood flow to certain areas. He’s just a wizard at getting my body right when I’m banged up. That’s been a huge help. I also put time aside for foam rolling and stretching every day.”

With his body in check, Williams will be more than ready for Piechota on Sunday night. It will likely be the toughest battle of his career. The Polish phenom is currently 10-0-1 with the only hiccup being a split draw in his fourth pro fight. Piechota is currently 1-0 in the UFC after winning his Octagon debut by decision in October. He had previously finished his opponents in all of his wins.

Williams has plenty of finishes as well. In his 15 wins, “The South Jersey Strangler” has submitted nine opponents, knocked out two, and all four of his decisions ended in his favor. With three regional middleweight titles on his record, he is no stranger to tough opponents. Two of his three losses were to the aforementioned Smith, who has had recent success in the UFC. While Williams is not one to talk trash, he is not opposed to a trilogy fight with Smith.

“Of course, I would like to get that one back,” said Williams. “But I’m not going to sit here and try to call the dude out. He’s got a bunch of fights in the UFC now. He’s doing pretty good. I know he just lost, but he’s doing good. I’m just getting my feet wet. As far as me trying to call him out, I’m not going to do that. That just sounds stupid. Obviously, I would love for me to keep winning and him to keep winning, where we would cross paths again.”

For now, Williams has been working hard, staying in tune with his body, and getting ready to put on a show against Piechota in their UFC Fight Pass preliminary fight on Sunday night. It’s been a long road, but he has finally made it in. Now, he has a message for fight fans.

“Tune in to watch me fight, because I’m cutting loose,” said Williams. “I’m a union carpenter. I’ve got a great job, great family, and everything’s good at home. I’m here to cut loose and have fun, so I’m going to leave it all out there on Sunday. I’m coming to finish this fight in spectacular fashion.”