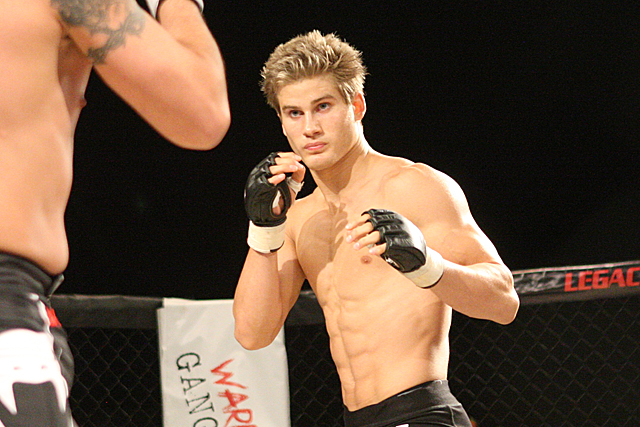 As the fourth youngest fighter on the entire roster in the UFC and a college student, it is more than difficult enough to keep up with how fast the sport is evolving. However, Sage Northcutt has been doing a pretty phenomenal job at it. He won his second in a row and 10th professional fight on Saturday at UFC Fight Night 126 against the very gritty Thibault Gouti. While the decision was unanimous for Northcutt — the scores were 29-28 across the board — the fight did not necessarily turn into a one-sided affair.

After being stopped by Bryan Barberena and then Mickey Gall late in the same year, Northcutt seemed to have had his hype train derailed a bit. However, since he moved to Team Alpha Male, Northcutt has seemed to mature in the fight game, staying a lot more patient and technical in his fights.

In his first couple of UFC fights, Northcutt simply overpowered his opponents with strength and speed. That’s changed in his recent affairs. His fight before the Gouti fight came against Michel Quiñones, and Northcutt showed excellent composure to take a pretty dominant victory. It seemed like the game plan didn’t change much against Gouti, but in what was a step up in level of competition, Northcutt had a lot more trouble than he did against Quiñones.

Northcutt has been a very gifted striker since a very young age, but his fight against Gouti included some scary moments for the 21-year-old. He was tagged several times in the first round and even dropped a couple of times. Until the third round, Northcutt’s chances of pulling off a win didn’t seem particularly high. Then he turned it on and increased his output to take the final frame and win the fight.

At times, it seemed like Northcutt simply did not have it in him to get away from Gouti and start imposing his will on the French fighter. Many weaknesses were exposed in Northcutt, too. In particular, his lack of head movement and his inability to get away from grappling situations or getting his back away from the fence were all on display.

Northcutt, as mentioned, is still extremely young and has years of fighting ahead of him. However, if he doesn’t correct the mistakes he made in his last fight, he will not be able to move on to compete against the top fighters in the division. Northcutt is a fighter that has it all. He has the athleticism, explosiveness, and the superstar potential. However, he has been exposed a few times in the Octagon now. With everyone’s skills rising up, Northcutt needs to find the right component that works for him in order to continue to improve. Time is on his side, but he must use it wisely.