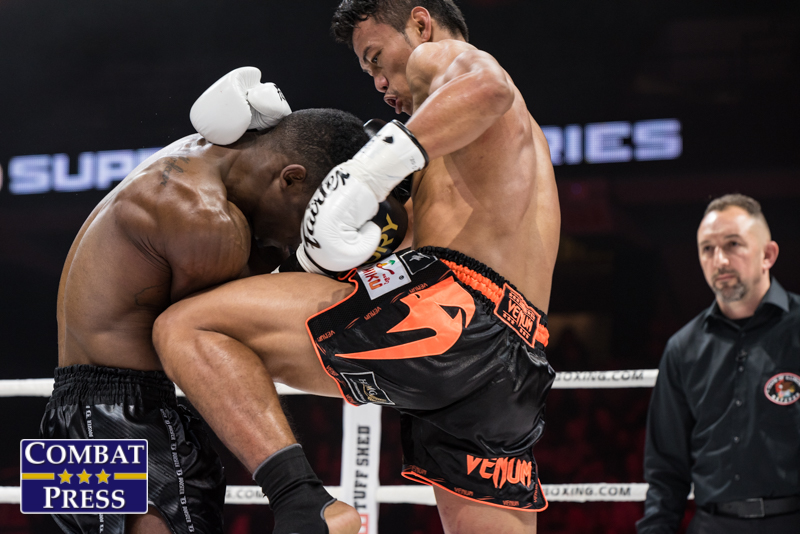 Well, just when we started to count out Donald Cerrone, the “Cowboy” strikes. In the headliner of UFC Fight Night 126 in Austin, Texas, Cerrone finished fellow welterweight Yancy Medeiros with just two seconds remaining in the first round. The loss is Medeiros’ first as a 170-pounder, and it breaks a three-fight skid for Cerrone.

Meanwhile, heavyweight Derrick Lewis rebounded from his loss to Mark Hunt with a third-round finish of Marcin Tybura in the co-headliner of the evening. Lewis put an end to Tybura’s rise, but he also moved to 7-1 over his last eight fights with all but one of his victories coming via knockout or TKO. Unfortunately, Lewis showed signs of all his common flaws, including a lack of cardio and a tendency to lose position and get controlled on the mat. Lewis has the power to pull off a turnaround at any moment, but his knockout ability is the only aspect of his game that makes him a potential contender. If Hunt could properly game-plan for the guy, you can be sure that the likes of Fabricio Werdum and Stipe Miocic will be ready for him.

Curtis Millender kept the knockouts coming with his finish of Thiago Alves. Even more impressive, the UFC newcomer completely dominated the Brazilian and almost had the finish in the first round. Millender looks like a promising addition to the UFC’s welterweight roster.

Josh Burkman lost yet again. He only lasted a little over two minutes before succumbing to a guillotine choke courtesy of Alex Morono. It seems unlikely that Burkman will stick around with the UFC now that he’s lost five in a row and seven of his last eight.

Of course, the UFC wasn’t the only show in town this past weekend. Bellator hosted its 194th event, headlined by one of the quarterfinal match-ups of the league’s heavyweight grand prix. Matt Mitrione scraped by with a majority decision over fellow UFC veteran Roy Nelson to advance.

Patricky Freire delivered the more clear-cut and spectacular finish in the co-main event when he knocked out Derek Campos in the first round of their lightweight bout.

Vadim Nemkov defeated former Bellator light heavyweight champ Liam McGeary at the event. Guess that makes Nemkov an instant top contender for the 205-pound belt, especially since most of the top light heavyweights in Bellator are occupied with a heavyweight tourney bid.

Elsewhere on the Bellator 194 main card, two sub-.500 fighters fell in what can only be called MMA versions of enhancement fights. Maybe the No. 2 promotion in the world should opt for legitimate fighters on its main card at the very least.

Can Jose “Shorty” Torres please get a shot in the UFC already? The two-division Titan FC champ defended his Titan flyweight belt on Friday with a first-round finish of Alberto Orellano. Sure, Torres only has seven pro fights, but he also had an extended amateur career. He’s ready for the big show.

Tayfun Ozcan picked up the biggest win of his kickboxing career at Enfusion Live 62 in Eindhoven, the Netherlands. The reigning Enfusion champion dispatched of two-time K-1 MAX champ Andy Souwer by knockout in the night’s main event. Ozcan put the kickboxing legend away with his own oft-used technique, the counter right cross, which Souwer used to great success in his illustrious career. Now, Ozcan is primed to continue his push toward the top-10 with his fifth straight victory.

The welterweight title changed hands at GLORY 50 on Friday, Feb. 16 in Chicago. Harut Grigorian became the sixth man to hold the belt when he scored a first-round knockout over Murthel Groenhart, whom he had previously lost to twice. Grigorian won’t have an easy upcoming opponent, as former titleholder Cédric Doumbé is set to tangle with top-flight prospect Alim Nabiyev at GLORY 51 next month.

The world’s top pound-for-pound ranked kickboxer, Sitthichai Sitsongpeenong, once again proved why he is considered one of the best fighters today, regardless of combat sport. Sitthichai put on a truly masterful performance from the opening bell to the final seconds of his five-round drumming of challenger Christian Baya. Sitthichai used his southpaw toolbox to the near perfection as he clearly won every round, despite one of the five judges dissenting on the fourth round. What’s next for the best kickboxer in the world? As long as newly crowned Kunlun Fight champion Marat Grigorian does his job against Stoyan Koprivlenski at GLORY 52 later this year, a fourth match-up between the top lightweights is the obvious fight to make.

Benjamin Adegbuyi ran through his competition during the heavyweight contender tournament with knockout victories over D’Angelo Marshall and Junior Tafa to win his third GLORY four-man tourney. Was his dominant performances enough to earn him a third crack at GLORY gold or is he destined to erase his controversial loss to Guto Inocente first?

Showtime Boxing delivered yet again Saturday night. Viewers watching from home and live from the Mandalay Bay Resort in Las Vegas were treated to fast paced action and an early candidate for “Knockout of the Year.” The co-main event of the evening saw the youngest champ in boxing, David Benavidez, successfully defend his WBC super middleweight title over Ronald Gavril. The rematch ended without controversy as the 21-year-old champion battered Gavril, connecting on four- and five-punch combinations throughout the entire 12 rounds. As the fight made its way into the later rounds, there were even pleas from viewers to stop the fight. Gavril’s corner should have done so, as their fighter offered zero resistance to the champ.

In the main event of the evening, Danny Garcia returned from an 11-month layoff to remind fans he’s still one of the best welterweights alive and not to sleep on his knockout power. In the ninth round of the bout against Brandon Rios, Garcia countered a lazy jab attempt with a heavy right. The punch saw Rios crash to the canvas and the referee stop the fight after Rios stood back up, but was on wobbly legs. Rios made the contest more competitive than was expected and deserves recognition for doing so. After the fight, things got a little WWE, however. Shawn Porter somehow found his way into the ring and immediately called out Garcia. The two traded expletives and challenges, with Garcia telling Porter to, “take it into the street if you want to.”

What would a good weekend of boxing be without a little controversy and judges who are blind as a bat? We got that before before Showtime kicked off their show with Victor Ortiz vs. Devon Alexander. The main event, airing on Fox, saw what was a clear victory for Alexander where he used his jab and hand speed to deliver cleaner punches on the challenger. Alas, the judges saw something different and as the scores were read after 12 rounds, the result was a draw. Alexander deserved better. The sport deserves better and it’s a shame this happens more often than not.

The World Boxing Super Series saw its’ first finalist in the super middleweight tourney placed. George Groves outboxed Chris Eubank Jr. over the course of 12 rounds, leaving little doubt who the winner was and thankfully the judges saw it the same. However, Groves did suffer an injury in the fight which could make things interesting. The WBSS promoter, Kalle Sauerland, said a replacement may have to be sought for the finals of the tournament if Groves is injured. Eubank Jr. may even be that replacement.

Last, but not least, Friday saw the crowning of a champion for one of the good guys of the sport. Raymundo Beltran defeated Paulus Moses to become the WBO world lightweight champion. Beltran’s story has been well documented, as he was fighting for his green card to remain in the United States.