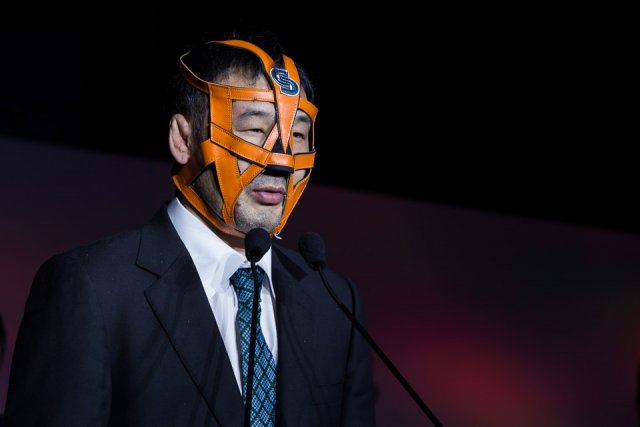 During the press conference, Sakuraba had this to say about what to expect from the promotion going forward, “I would like to contribute to the combat-sports world by holding these grappling events, and help nurture and encourage amateur fighters around the world. We are planning three events this year — the first in Japan and then England and America, where grappling competitions are popular these days. We are also preparing to hold amateur events in Japan and aim to promote the QUINTET style of ‘winner stays on’ grappling survival matches. HALEO is sponsoring our team for the first event.”

“The team weight limit may be 420-kilograms or 430-kilograms — this is yet to be decided. We want competitors to fight as close to their natural weights as possible in order to reduce extreme weight-cutting issues. Yuki Nakai of the Jiu-Jitsu Federation of Japan (JJFJ) is being consulted regarding the rule set. The rules are being adapted to not restrict grappling-arts fighters from the likes of jiu-jitsu, judo, wrestling and sambo.”

The established rules are as follows: Each team will have five members. The total team weight will not exceed 430 kilograms. All bouts will be openweight matches with no judges and a submission-only format. The match length will be 10 minutes unless there is a 20-kilogram weight difference between competitors, in which case the match will be five minutes. Fighters must wear rash guards. Heel hooks and close guard will not be allowed for the first event.

The teams are as follows:

Kazushi Sakuraba: The long-time Pride FC veteran and UFC tournament champion has 26 wins and 19 submissions in his famed career. As a talented amateur wrestler in Japan, Sakuraba came to fame in the 1990s when he turned his focus to professional wrestling and, eventually, MMA. Sakuraba shocked the grappling world when he took down the famed Gracie tribe, which included Royler, Renzo, Royce and Ryan. Sakuraba was able to snap the arms of Royler and Renzo, as well as wear down three-time UFC tournament champion Royce in a 90-minute no-time-limit match at the Pride Grand Prix 2000 Finals. Sakuraba was recently inducted into the UFC Hall of Fame as a pioneer of the sport.

Josh Barnett: Barnett is a former UFC heavyweight champion, King of Pancrase openweight champ, the 2009 IBJJF no-gi world champion and a popular professional wrestler in Japan. He is a key figure in spreading catch wrestling into the MMA ranks with a long and successful 21-year career. Barnett has an MMA record of 35 wins in 43 fights with 29 stoppage victories.

Daisuke Nakamura: Nakamura is an exciting submission artist known for his acrobatics and thrilling style of grappling. The MMA fighter, grappler and professional wrestler has competed all over the world, but he achieved his greatest success in Japan, where he won the Deep lightweight championship. Nakamura has finished 15 of his 28 wins by way of submission, including a number of flying-armbar victories and even a flying-knee knockout. Nakamura is also a five-time All-Japan champion at the brown- and black-belt levels.

Hideo Tokoro: An accomplished MMA fighter and grappler who has fought many of the best fighters in Japan during his 17-year MMA career, Tokoro famously worked as a janitor part-time while he came up the ranks competing in ZST, Pancrase and Shooto. The Dream bantamweight grand prix winner fell short in a bid for the Dream world title against Hiroyuki Takaya. Tokoro has compiled 34 wins and 25 stoppages in his illustrious career with big-time victories over Alexandre Franca Nogueira, Brad Pickett, Royler Gracie, Masakazu Imanari, Yoshiro Maeda, Rumina Sato and Darren Uyenoyama.

Marcos de Souza: De Souza is a Brazilian Jiu-Jitsu black belt under his father, Adilson de Souza, who comes from the famed lineage of prominent early Gracie jiu-jitsu figure Octavio de Almeida. Souza began training as a child, but it wasn’t until he was 12 when he decided to change his focus from soccer to grappling. Souza is an accomplished grappler with national tournament victories in Brazil and Japan. He is also an undefeated MMA fighter with six victories and five submissions. His lone fight that went the distance came against former Kunlun Fight champion Zhang Lipeng.

Satoshi Ishii: A gold medalist in judo during the 2008 Olympics in Beijing, China, Ishii also holds gold-medal wins in the world junior championships, All-Japan judo championships and United States championship. Ishii turned his success into an MMA career, debuting in 2009 against fellow judoka Hidehiko Yoshida at Dynamite!! The Power of Courage 2009. Ishii turned down a potential UFC contract following a training stint in the United States. However, he continued his MMA journey against top-level opponents all over the world, with wins over former UFC champion Tim Sylvia, K-1 legend Jérôme Le Banner, and eight additional UFC veterans, including Heath Herring, Pedro Rizzo and Jeff Monson.

Dong-Sik Yoon: Yoon is a judo black belt with a plethora of judo competition experience on the South Korean, Japanese, Asian and world scene. While he never competed in the Olympic games, Yoon did win gold medals during competitions in Italy, France, Austria, Germany, Great Britain, Iran and Japan. He also won gold at the Asian Games, the Asian Championships and the Goodwill Games, as well as winning a bronze medal at the world championships in 2001. Much like Ishii, Yoon turned his judo career into an MMA career against top-level competition in Pride FC, Dream and Road FC. Yoon holds victories over UFC veterans Tarec Saffiedine and Daiju Takase, former Cage Rage champ and K-1 veteran Melvin Manhoef, and Pride FC alums Zelg Galešić and Shungo Oyama.

Bu-Kyung Jung: A silver medalist in judo during the 2000 Olympic games in Sydney, Australia, Jung has been training in judo when he was 11 years old. In 1998, he won the World University Judo Championships. He went on to win gold medals during the Asian Judo Championships in 1999 and 2003. He was one match away from qualifying for the 2004 Olympics, but he lost in a qualification match. Jung is also a Dream and Deep veteran, but he was thrown to the wolves in MMA and lost all four of his matches, albeit against the likes of UFC vet Katsunori Kikuno and Pride FC fighters Shinya Aoki, Mitsuhiro Ishida and Daisuke Nakamura.

Two additional team members will be announced at a future date.

Teodoras Aukštuolis: An experienced judoka, combat-sambo champion, and mixed martial artist, the Rizin fighter has a strong background in judo, a sport in which he placed at the junior and adult championships in Lithuania. The 26-year-old is a Lithuanian combat-sambo champion as well and was the runner-up at 100 kilograms in the world championships in 2017. Aukštuolis has 11 wins and five losses in his MMA career. His biggest win came against former Deep openweight champion and K-1 veteran Jaideep Singh under the Rizin banner.

Marius Zaromskis: One of the most decorated MMA fighters among the group, Zaromskis was the first Dream welterweight champion and the 2009 welterweight grand prix winner. Primarily a striker, he engaged in brutal wars with Ross Pointon and Ross Mason in Cage Rage and Waachiim Spiritwolf in Bellator. He scored brutal knockouts of Japanese legend Hayato Sakurai and UFC vet Jason High, and he challenged for a Strikeforce title against Nick Diaz.

Mindaugas Veržbickas: A European combat-sambo champion and MMA fighter, Veržbickas hails from Lithuania and is an Absolute Championship Berkut and KSW veteran. He holds an MMA record of 14-6-2 and finished 10 of his opponents by submission.

Mykyta Mikhno: A European combat sambo champion and Bellator veteran, Mikhno has won five of his seven professional MMA bouts. His wins have come by way of anaconda choke, armbar and rear-naked choke.

Sergej Grecicho: A three-time world combat-sambo champion, pankration champ and experienced MMA fighter, Grecicho started competing in sambo when he was 10. Grecicho has fought in ACB, KSW and Cage Warriors during his 35-fight MMA career, which features 25 wins and 20 submission finishes.

Gregor Gracie: Gregor is an accomplished Brazilian Jiu-Jitsu practitioner and grappler under the Gracie name. His real last name is Rangel, but due to his time spent with his elder brothers Igor and Rolles Gracie, he adopted the Gracie name for competition. Training under coach Renzo Gracie, Gregor is a Brazilian national champion, Pan American champion, and finished third in the 2009 ADCC tournament. Gracie is a ONE Championship and World Series of Fighting veteran with seven wins and four losses in his MMA career.

Charles Negromonte: A coach at Roger Gracie’s gym, RGA association, Negromonte is a Brazilian Jiu-Jitsu black belt under José “Zé Radiola” Olímpio. He is a European, South American and Brazilian champion. Negromonte won a bronze medal at the IBJJF world no-gi championship in 2015 and was the runner-up in 2016.

Craig Jones: Now a black belt in Brazilian Jiu-Jitsu under Lachlan Giles, Jones is a IBJJF purple-belt world no-gi champion and two-time ADCC trials winner in the Asian and Oceania regional tournaments. The Australian burst into the mainstream with a massive upset over five-time IBJJF world champion Leandro Lo during the 2017 ADCC worlds. Jones also finished third at the Eddie Bravo Invitational 11 and second at EBI 14.

Dan Strauss: Strauss is a Brazilian Jiu-Jitsu black belt under Roger Gracie. He is an accomplished grappler on the European grappling circuit, where he won a European no-gi grappling championship. He also won a NAGA championship and qualified for the 2011 ADCC tournament.

One additional team member will be announced at a future date.