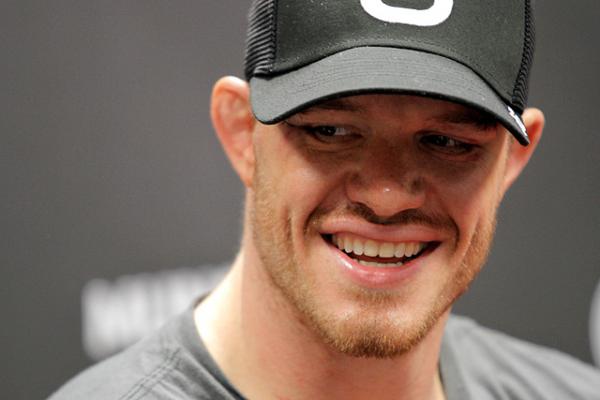 On the night of June 21, 2008, Amir Sadollah submitted C.B. Dollaway in the first round to win season seven of The Ultimate Fighter. One fighter has gone on to put together a respectable career in the UFC, while the other has struggled to achieve any consistency over the last six-plus years. However, it was the loser that night who would become the long-term winner.

It’s Dollaway who has paved the way for himself to make a run at the middleweight title.

Dollaway, currently the ninth-ranked middleweight in the UFC, has won four out of his last five fights. The only loss in that span came by way of a split decision against Tim Boetsch at UFC 166. Had it not been for poking “The Barbarian” in the eye on more than one occasion during their fight, Dollaway may very well be riding five-fight winning streak right now.

The decorated wrestler out of Arizona State University has done a fantastic job of building upon his strength on the ground to incorporate his power in the stand-up game. As typical with most wrestlers, Dollaway has had most of his wins come by way of decision or submission (60 percent). His knockout ability is what sets him apart—he’s racked up six of victories by way of strikes. While there isn’t anybody on Dollaway’s win list that would be considered a big name (no, Jason “Mayhem” Miller doesn’t count), he will have an opportunity to add one in December when he faces off against fourth-ranked Lyoto Machida.

The match-up in itself isn’t going to be easy for Dollaway, and that’s not even taking into account that the event is taking place in Brazil. Fighting outside of the United States hasn’t hindered Dollaway before, though. He is 5-0 in fights outside of the country, including two in Brazil. Machida will have the crowd rallying behind him, and while that may throw off some fighters, Dollaway should remain unfazed.

The UFC’s middleweight division has a logjam of fighters trying to move their way to the top, and the journey to Chris Weidman is a long and unpredictable one. On the surface, it doesn’t appear Dollaway has much of a shot to be in a title fight anytime soon, but he’s never going to be closer to taking as big of a step to that goal as he is right now. A win over Machida would be huge for Dollaway, but a loss would be equally as devastating. To give an example of how congested the middleweight division is, a win over the fourth-ranked fighter may only move Dollaway up a spot in the rankings, if he moves at all. It’d be difficult to believe he’d leap past anybody but maybe Gegard Mousasi and Machida, but those are a couple of big ifs.

Dollaway has been knocked out twice in the past (in back-to-back fights), but he has a good chine. Since his last knockout loss three years ago, Dollaway has managed to avoid falling victim to any additional devastating blows. Machida, although not as swift on the feet as he was when we saw him destroy Rashad Evans at UFC 98, still has the ability to dance in and out of the pocket and get his opponent to backpedal with a flurry of punches. Dollaway is going to need to be mindful of the kicks that come at all angles from Machida and harness his emotions so he doesn’t try to do too much too soon.

Is Dollaway a serious contender for the belt? I don’t think so, not yet. At the age of 31, he still has time to make a run even if he does lose to Machida. He puts on exciting fights and has a great combination of powerful striking and an aggressive ground game. Unfortunately for Dollaway, there is a long list of fighters ahead of him, many of whom appear to be a win away from getting a title shot.

Dollaway has the talent to surprise people and win a couple of big-name fights, but he doesn’t have the resume you’d expect from somebody one would pin as a future champion. Frankly, Dollaway hasn’t shown us he can beat an elite opponent. He can, however, change the minds of many with a win over Machida in December.