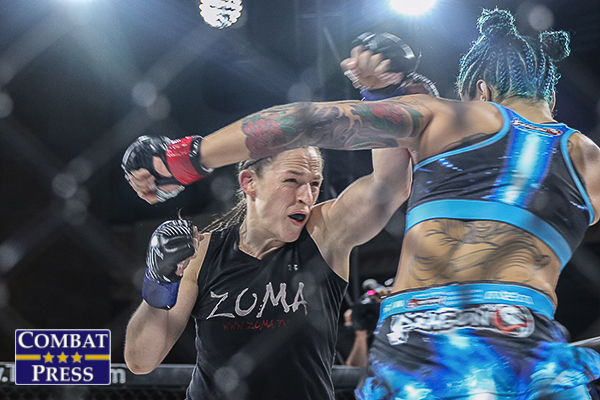 Invicta FC 27: What’s Next for the Winners

The first Invicta FC event of 2018, Invicta FC 27, is in the books. In what’s become the norm with the company’s events, exciting fights gave us a good look at the present and future of women’s MMA. Nine fighters walked out of the cage victorious. Each looks to get back in there soon. They’ll need a dance partner, and here are possible opponents for each that would make for a good match-up.

Peralta made quite the impression in her pro debut opposite Jade Ripley. Peralta’s striking was on point, which is a good sign for a fighter so early in her career. Her right hand was constantly finding its mark, but her punches weren’t wild, loopy shots. She displayed good technique with her boxing. Due to her style and what seems to be some pretty advanced striking, a match-up with Van Soest would be perfect. Invicta would have a “Fight of the Night” contender on its hands. Van Soest is a multiple-time Muay Thai and kickboxing champion who would hold the edge on paper in that department. However, this is MMA, and Peralta can make it a fight.

Solid striking displays were a common theme throughout the early portion of the Invicta FC 27 card. Martin provided this and more, finishing the fight with some nasty elbows from the ground over Tiffany Masters. Martin said in her post-fight interview that she is over the plateau, and her development has been rapid. She looked like a completely different fighter, so hats off to Tiger Muay Thai. Holliday would be a good next opponent for Martin. Both fighters are still young in their pro career and carry a .500 record. It’d be sink-or-swim time for both Martin and Holliday, with the winner setting themselves up for bigger fights in a crowded 115-pound picture.

Major props to Invicta for signing the first Thai fighter in the company’s history. Lookboonmee delivered on the hype by tossing around and beating up Melissa Wang for three rounds. It was surprising how comfortable Lookboonmee appeared in the cage and how she handled the transition to MMA. DeCoursey would provide an excellent next step for Lookboonmee. DeCoursey also made her pro debut recently, picking up a win against Ashley Medina at Invicta FC 25.

Next Opponent: Ediane Gomes for the Invicta FC featherweight title

Spencer has been a breath of fresh air in a thin featherweight division. Kudos to Invicta FC for signing her in 2015 and continuing to provide featherweight fighters an opportunity to showcase themselves. We’ve seen Spencer grow leaps and bounds in her four professional fights. Following her decision nod over Akeela Al-Hameed, the time is now for Spencer to take the next step. It should come in the form of Gomes, a veteran who has plenty more fights than Spencer and will be no easy task for the up-and-comer. While we’re at it, make it for the title. Both ladies deserve it.

Walker-Sanchez returned to action for the first time since 2016. She eked out a split-decision win over Cheri Muraski. With the victory, the Guamanian remains undefeated. Invicta can pair Walker-Sanchez with Maverick, who made the move up to flyweight in her last bout after struggling with the weight cut for strawweight, to create a crowd-pleaser and potential “Fight of the Night” candidate.

Cummins, at her natural weight class of 105 pounds, has been a tough puzzle to crack for her opponents. Save for her loss to Jinh Yu Frey, Cummins has been dominant. Her win over Stephanie Alba at Invicta FC 27, plus a victory over Amber Brown, make Cummins a top-10 fighter in her division. A rematch against Frey would be great, but it’s too soon to book that. In the meantime, Van Hoose would be a solid opponent for Cummins. Van Hoose has turned things around, winning two consecutive fights. These two fighters have deceiving records because they’ve faced off against quality competition since their respective pro debuts. A win by either Van Hoose or Cummins should get them on the cusp of a title shot.

Jacobson returned to her winning ways against Ashley Nichols. Jacobson showed just how advanced her wrestling is at such a young stage in her career. It’s clearly her bread and butter. She could emerge as a future champion. Gonzalez would be a game opponent and great match-up to further test Jacobson. The recent signee of Invicta stumbled in her UFC career. It was a case of too much, too soon. In Invicta, Gonzalez can thrive and continue to develop her tools while avoiding pushovers. This is another match-up where the winner could be closing in on a title shot.

Next Opponent: Jennifer Maia for the Invicta FC flyweight title

Porto has looked fantastic as of late. She finished Milana Dudieva and ran through Mariana Morais. Barring the circumstance where the Invicta champ Maia signs with the UFC, the rematch between Maia and Porto is the fight to make. The two last fought in March 2016 at Invicta FC 16. It was one of the best fights of the year for the organization, and it ended in a close decision favoring Maia. Porto deserves the opportunity to fight for gold again. If it happens, the fans get an opportunity to see two of the best flyweight fighters in the world go at it.

It’s nice to see Kaufman back in the cage and putting on a performance like she did against Pannie Kianzad. Kaufman is a top-15 bantamweight, no doubt. She’s criminally underrated. Kaufman is only 32 years old, which is plenty young to make another run. Her next potential opponent, Lehner, missed weight in her last Invicta fight and recently fought at featherweight in her home country of Germany. Lehner is too talented at 135 pounds to walk away from the weight class. If she can manage her weight correctly, she could land a fun fight against Kaufman.